When the Second Amendment was passed in 1791, was a well-regulated militia restricted to one musket, two spare flints and 24 bullets? No, that's not true: The Second Amendment to the U.S. Constitution does not define what a well-regulated militia is, but The Militia Act of 1792 does lay out some of the parameters; and the numbers above are the minimums per person, not the limit.

Did you know in 1791 when the Founders ratified the 2A, a well regulated militia was restricted to 1 musket, 2 spare flints and 24 bullets? They had to register and at anytime the gov could enter their home, take away their weapon and remove them from the rolls. 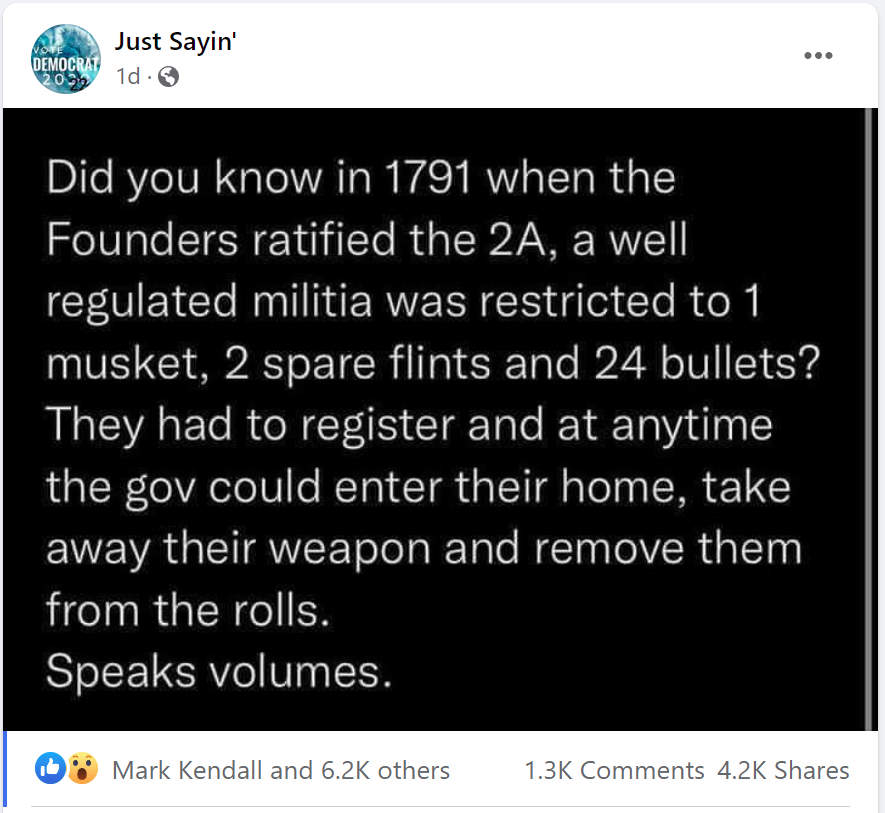 This is what the Second Amendment says:

A well regulated Militia, being necessary to the security of a free State, the right of the people to keep and bear Arms, shall not be infringed.

The language in the Facebook post appears to be a paraphrase of The Militia Act of 1792, which was passed on May 8, 1792, to provide "federal standards for the organization of the Militia." Here's what that section of the act says:

Be it enacted by the Senate and House of Representatives of the United States of America, in Congress assembled, That each and every free able-bodied white male citizen of the respective States, resident therein, who is or shall be of age of eighteen years, and under the age of forty-five years (except as is herein after excepted) shall severally and respectively be enrolled in the militia ... That every citizen, so enrolled and notified, shall, within six months thereafter, provide himself with a good musket or firelock, a sufficient bayonet and belt, two spare flints, and a knapsack, a pouch, with a box therein, to contain not less than twenty four cartridges, suited to the bore of his musket or firelock, each cartridge to contain a proper quantity of powder and ball; or with a good rifle, knapsack, shot-pouch, and powder-horn, twenty balls suited to the bore of his rifle, and a quarter of a pound of powder; and shall appear so armed, accoutred and provided, when called out to exercise or into service, except, that when called out on company days to exercise only, he may appear without a knapsack.

The act appears to place no limitations on weapons or ammunition and includes the expression "not less than" in reference to the number of cartridges a "white male citizen" should provide when "enrolled in the militia." Lead Stories could find no reference in the act to the government being able to enter a home and take away weapons as mentioned in the post.

Lead Stories has written other stories that debunked falsehoods surrounding the Second Amendment.