Did the Danish navy open fire as Russian warships entered territorial waters on June 17, 2022? No, that's not true: According to a statement from Denmark's Ministry of Foreign Affairs, the situation was handled diplomatically, not militarily.

The claim appeared in a video (archived here) published on YouTube on June 17, 2022, under the title "Attack on Russian warships! The Danish Navy opened fire as Russian warships entered territorial sea." 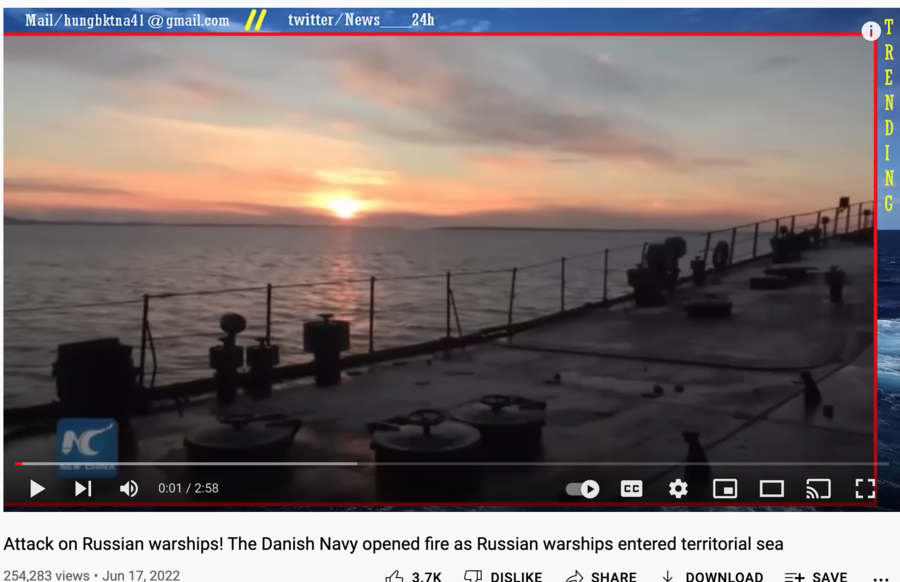 While the video opens with a narrator saying, "Shoot, sink it -- Demark opened fire to attack Russian warships for daring to encroach on territorial waters ... " there is nothing shown in the video to substantiate that statement. Indeed, at 1:40 in the video the narrator says the Russian ship left "so no fighting took place."

In an email to Lead Stories on June 21, 2022, Sissel Christine Søe Böss, the acting head of press at the Danish Foreign Ministry, wrote, "It is not true that Danish navy opened fire last week." She included a link to the official statement, which said that a Russian warship entered and then left territorial waters after the Danish navy made radio contact. The Russian ambassador to Denmark met with the Foreign Ministry to discuss Russian violations of Danish territorial waters.

Let me be clear: bullying methods do not work against Denmark. We will not accept that kind of Russian provocation. That is why we respond consistently and promptly. I think it is telling that while we in Denmark celebrate democracy, free speech and democracy at the People's Assembly, Russia chooses to come forward with such provocations with military vessels. It speaks for itself.

Kofod also said that it had been communicated very clearly to the Russian ambassador that violation of Danish territorial waters not long after a Russian military aircraft violated Danish airspace was unacceptable.

In an email to Lead Stories on June 21, 2022, Dylan White, a NATO press officer, confirmed the Danish authorities' account, saying the video is nothing like what actually happened: "A Russian warship entered and then left territorial waters after the Danish navy made radio contact."

News coverage by major news organizations including The Washington Post echoed such statements, with the Post quoting the Danish armed forces Defense Command as saying, "The Russian vessel left after it was contacted on marine two-way radio by the Danish navy."