Did McDonald's accidentally give out 5,000 condoms with Happy Meals? No, that's not true: The site this claim originated from is satirical. There is no evidence from any trusted news organizations that this event has ever occurred.

The claim originally appeared in an article (archived here) published by CAP News under the title "McDonald's Apologizes For Condoms In Happy Meals." The article's first publication date is unclear but it appeared at least as far back as 2012. Apparent references to the satirical claim appeared on social media as recently as a June 13, 2022, Facebook post. The article opened:

PROVINCETOWN, Mass. (CAP) - McDonald's executives were left with egg (McMuffin) on their face this week, when over 5,000 Happy Meals were distributed with colored condoms instead of a plastic toy from the movie How To Train Your Dragon 2. 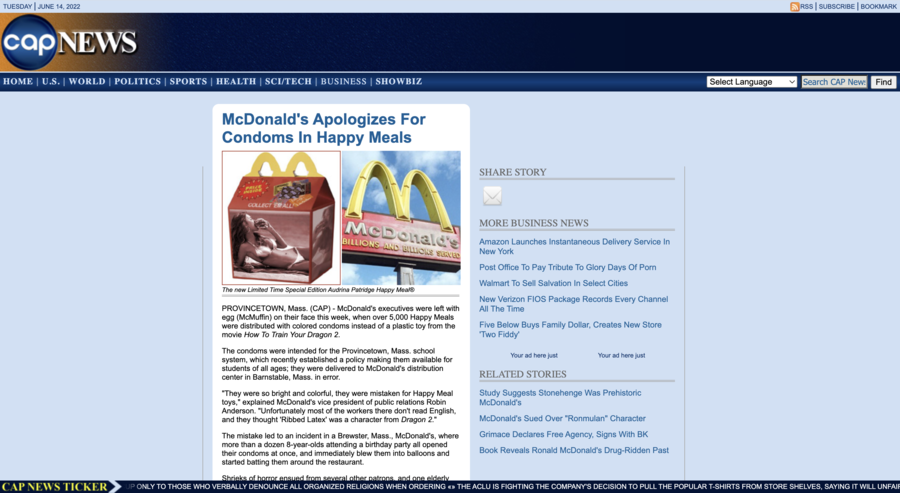 There is no evidence from any reputable news sources (ABC News and The New York Times did not have a report on the claim, for example) that McDonald's has ever accidentally placed 5,000 condoms in Happy Meals in place of children's toys.

Hoax Or Fact, another fact-checking website, rated this claim a hoax three years before the claim began reappearing on social media in 2022.

We reached out to McDonald's USA Press team for a comment on this claim. We will add their response if we receive one.