Is this skull an early example of a cranioplasty, a surgical repair of a skull defect, done in Peru in the year 400? No, there's no evidence that's true: John Verano, an anthropology professor who specializes in biological anthropology, told Lead Stories that this skull is "almost certainly a fake." He notes that he's seen hundreds of perforations in human skulls while studying in Peru, and that this photo looks like molten gold had been poured into the skull, which would not make sense as the medical procedure a Facebook post is claiming it is.

This is an early example of a successful cranioplasty from Peru (400 CE). The patient survived, as evidenced by the well-healed in situ cranioplasty made from a gold inlay. 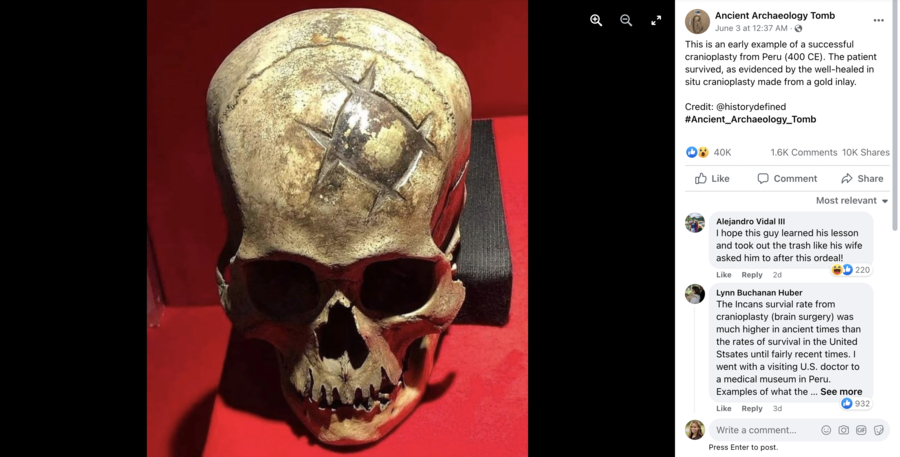 A reverse image search using TinEye and Google didn't reveal any links from a museum or private collector. A Google search of the phrase "early cranioplasty" brings up the image on ResearchGate, with the image included in a 2017 academic article titled "Landmarks in the History of Traumatic Head Injury." The article credited the "Museum of Gold, Lima, Peru" -- apparently a reference to the Gold Museum of Peru in Lima -- for the photo.

Lead Stories reached out to Verano, of Tulane University in New Orleans, to ask about the photo and the claim. He has done field research in Peru on ancient skeletal remains. In a June 8, 2022, email he said:

Sorry to say that this skull is almost certainly a fake made for sale to a private collector. If this is the one I've seen before, it is in the Gold Museum in Lima, Peru, a private museum that has been accused multiple times of having fake objects on display. From my experience studying hundreds of trepanned skulls from Peru, this is a case unlike any other, which is always reason for doubt. To me it looks like molten gold has been poured into this defect in the skull (rather than a sheet of gold placed over the opening), and this makes no sense at all.

Trepanning is the act of using a trephine, a surgical saw used for cutting out circular sections of bone or eye tissue.
We have emailed the Gold Museum of Peru and will update this article with any relevant information we receive from them.