Was the plane from United Airlines Flight 93 not at the reported crash site near Shanksville, Pennsylvania? No, that's not true: The hijacked plane crashed into the ground on September 11, 2001, almost upside down at a speed of up to 580 miles per hour, exploding, according to the National Park Service website for the Flight 93 National Memorial. Wreckage was found up to eight miles away. 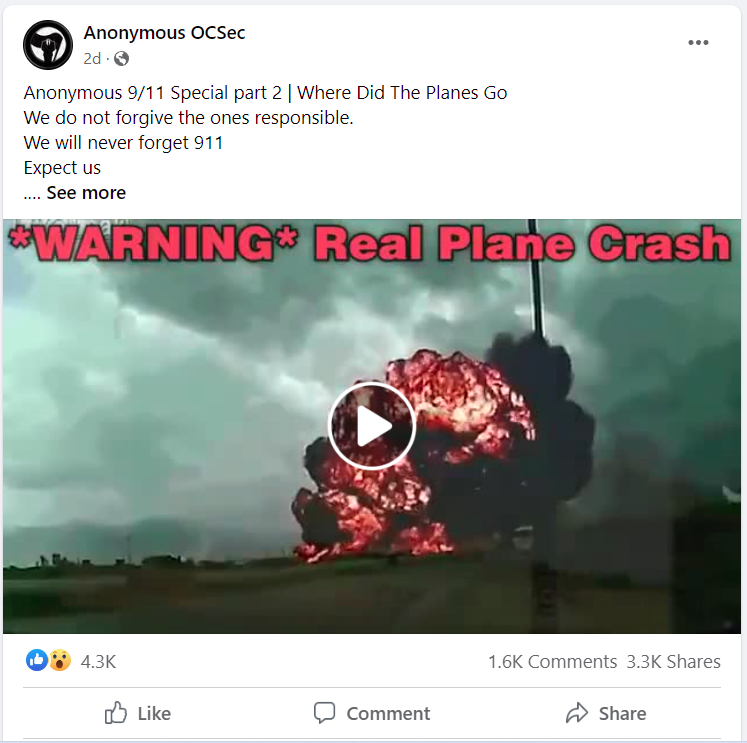 While the title of the post says "planes," the video only discusses news coverage surrounding the crash of a single plane. The beginning of the 9½-minute-long video edits together news footage and interviews of people describing the crash site of Flight 93 as a relatively small gouge in the ground and no large pieces of debris. At 1:40, it is interspersed with still images from the crash of Vladivostok Air Flight 352, on July 4, 2001, showing large chunks of the Russian plane still intact. Two minutes later in the video, two other plane crashes are shown with large fireballs.

The other plane crashes are never discussed. The editing seems to imply that there should have been more debris and a larger burn pattern on the ground from the Shanksville-area crash.

Where did Flight 93 crash?

The plane crashed in an open field next to a wooded area in Stonycreek Township, Somerset County, Pennsylvania at 10:03:11 am. The nearest town is Shanksville. Flight 93 struck the ground at a 40 degree angle almost upside down, hitting right wing and nose first, at a speed of between 563-580 miles per hour. It was carrying approximately 5,500 gallons of Jet A fuel at impact.

Had the plane maintained its speed and flight path, rather than crashing in Stonycreek Township, it would have arrived in Washington D.C. in 18-20 minutes. The nation's capital is about 125 air miles from the Flight 93 crash site.

How big was the crash site and what did the wreckage look like?

The first responders described the crater as about 15 feet deep and about 30 feet across. It was irregularly shaped. The wreckage around and inside the crater consisted of largely unrecognizable pieces of twisted metal, pieces of the landing gear of the plane, a tire, the frames of some of the seats, bits of charred paper, and remnants of luggage and clothing. Most of the pieces of wreckage were quite small, the size of a notebook or smaller. Many more pieces of wreckage, also quite small, were recovered during the investigation when the crater was excavated. Extensive searches through the wooded area south of the crash site, and even arborists in the tree tops found more debris from the crash. A pond about 900 feet southwest of the crater was partially drained to recover debris. Debris was collected from the yards of nearby homes, farmer's fields, and from around a nearby residential lake. The largest and heaviest pieces recovered were parts of the plane's two engines and a piece of fuselage with several window openings. This fuselage piece measured about six feet by seven feet and was found near the woods south of the crater. Lightweight paper items were found as far away as New Baltimore, eight miles away.

Flight 93 was a Boeing 757-200 airplane with a wingspan of 125 feet and a length of 155 feet. Thousands of small pieces of the aircraft were found at the crash site. Some large pieces were also recovered, including this section of the fuselage, which measured about 6 feet by 7 feet. The following images are part of FBI evidence from the investigation: 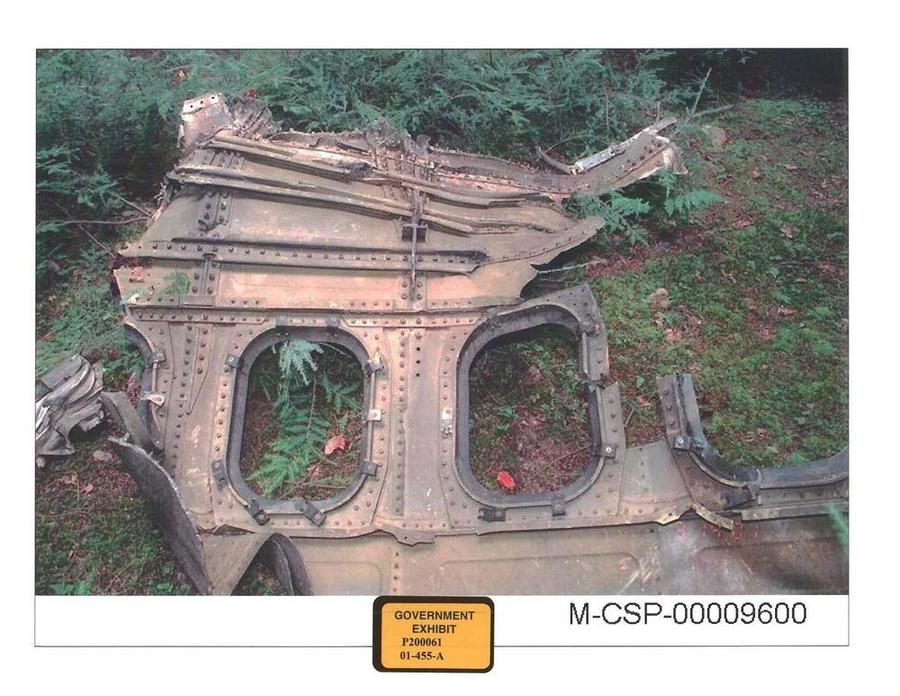 Other airplane debris recovered at the crash site included a section of the outer skin of the airplane fuselage: 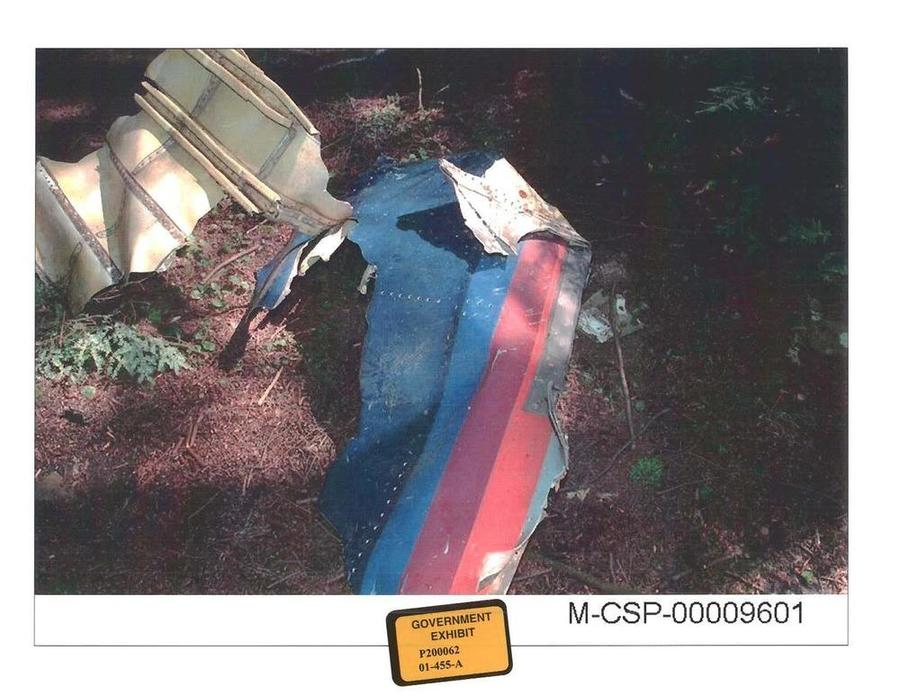 Investigators also dug up part of an engine at the crash site: 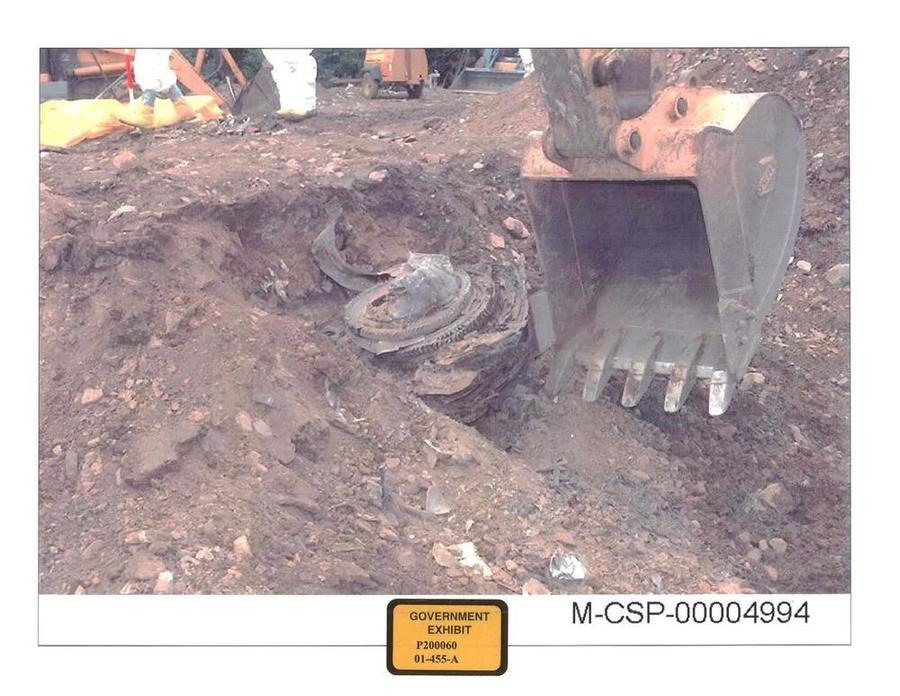 Also recovered were the cockpit voice recorder and the flight data recorder, along with the partial remains of those on board Flight 93. The New York Times reported this around the 10th anniversary of the 9/11 attacks in September 2011:

Not much, of course, was left after the crash except debris from the aircraft and some personal belongings. [Somerset County coroner Wallace] Miller said that only 8 percent of the human remains were ever recovered because the plane, roaring down at more than 570 miles per hour, exploded when it crashed. 'Everything vaporized on impact,' he said.

At least some remains were recovered and matched for all 40 on board (in fact, for all 44, including the four terrorists). But the amounts were tiny -- much less, even in total, than those that were unidentified.

The second half of the video, starting at 5:05, focuses on a debunked theory that a small white jet, not a Boeing 757, crashed near Shanksville. There was a plane, but it didn't crash. This is what Popular Mechanics reported on September 10, 2021:

FACT: There was such a jet in the vicinity--a Dassault Falcon 20 business jet owned by the VF Corp. of Greensboro, North Carolina, an apparel company that markets Wrangler jeans and other brands. The VF plane was flying into Johnstown-Cambria airport, 20 miles north of Shanksville. According to David Newell, VF's director of aviation and travel, the FAA's Cleveland Center contacted copilot Yates Gladwell when the Falcon was at an altitude 'in the neighborhood of 3,000 to 4.000 feet.' ...

'They were in a descent already going into Johnstown,' Newell adds. 'The FAA asked them to investigate and they did. They got down within 1500 [feet] of the ground when they circled. They saw a hole in the ground with smoke coming out of it. They pinpointed the location and then continued on.' Reached by Popular Mechanics, Gladwell confirmed this account, but, concerned about ongoing harassment by conspiracy theorists, asked not to be quoted directly.