Are you six times more like to be killed by a doctor than a gun in the United States? We don't know. The estimates are too scattered to form a conclusion. Official mortality statistics from the Centers for Disease Control and Prevention (CDC) are typically based on the underlying cause of death as "reported and certified on death certificates by physicians, medical examiners and coroners." In 2020, 46,072 deaths included mention of "Complications of Medical and Surgical Care," the CDC's National Center for Health Statistics said in a June 14, 2022, email. But the agency also acknowledged that "medical errors are often simply not reported on the death certificate."

Several studies also have tried to pin down the number of preventable hospital deaths but the numbers range from 22,000 to over 400,000 and those are just estimates.

There is a better handle on deaths due to firearms. In 2020, the most recent year with complete statistics, 45,222 people died from gun-related injuries in the United States, according to the CDC.

In America, you're 6x more likely to be killed by a Doctor than a gun. 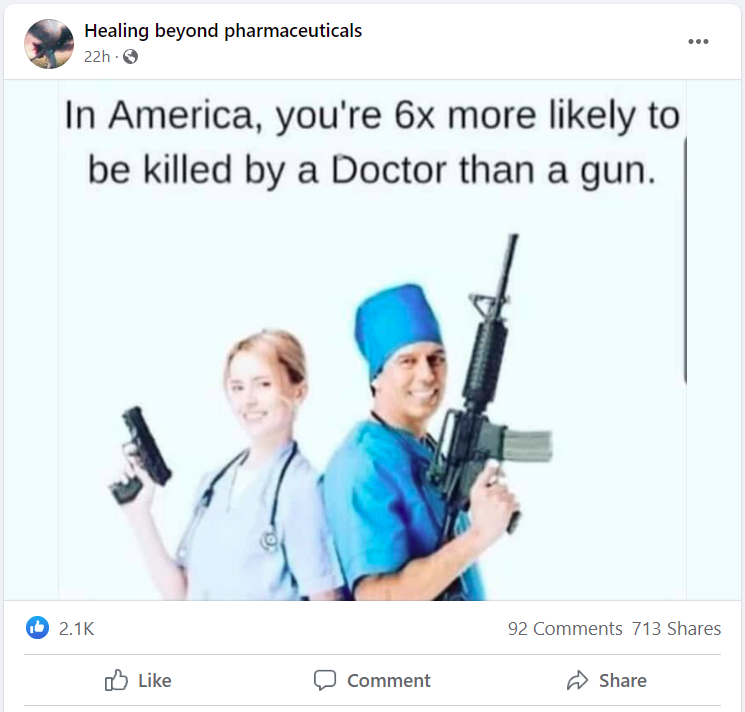 The wide-ranging numbers of deaths attributable to medical errors make it difficult to prove or disprove the validity of the meme's claim with its smiling physicians holding firearms. If we accept a Yale School of Medicine study that puts the number of preventable deaths at just over 22,000 a year in the United States, then you're about half as likely to "be killed by a doctor than a gun." With the CDC numbers of 46,072 deaths, then your odds are about even. In a Johns Hopkins University study that estimates 250,000 deaths, you're about 5.5 times more likely to be killed by a doctor than a gun. And in a Journal of Patient Safety study with an estimate of up to 440,000 deaths due to medical errors, your odds of being killed by a doctor are nearly 10 times higher.

If the numbers were at the upper limit of the estimates, then medical errors would be the third leading cause of death, falling between cancer and COVID-19 on the CDC numbers for 2020:

Number of deaths for leading causes of death

Source: Mortality in the United States, 2020, data table for figure 4

In its email to Lead Stories, the CDC explained the challenges of compiling the figures:

There are two reasons why medical errors are not included among the leading causes of death. First, complications of medical and surgical care are not considered to be the underlying cause of death according to the standard ICD coding rules promulgated by the World Health Organization and used by CDC's National Center for Health Statistics (NCHS). ICD coding rules prefer selection of the disease or condition for which the decedent was being treated (if reported) as the underlying cause. The assumption is that prevention of the underlying condition would obviate the need for medical intervention. Second, medical errors are often simply not reported on the death certificate.

Studies published over the past 15 years or so have shown a wide range of estimates on the number of deaths per year which are due to medical errors. But as most of these studies are based on small, potentially unrepresentative samples, they can be methodologically problematic, especially when attempting to extrapolate results to the entire United States. Some studies have also conflated complications of medical care with "medical errors". Not all complications are the result of error, nor are all preventable or avoidable. While such studies can be informative and useful, they also have important limitations and the results should be interpreted with caution.