Did the 1994 crime bill put over a million Black men in prison? No, that's not true: The Biden administration announced a plan in late July 2022 that, similar to the 1994 crime bill, would increase police funding and aim to crack down on crime.

Biden is attempting to recreate the 94 crime bill , it put over a Million Black Men in prison .
We know what that means for Us ! Please share this whit everyone You know , Atwell as go on line to find out about it.
Their voting on this is 48 hours . Black People Be Aware ! Knowledge is Key !!!!!!! 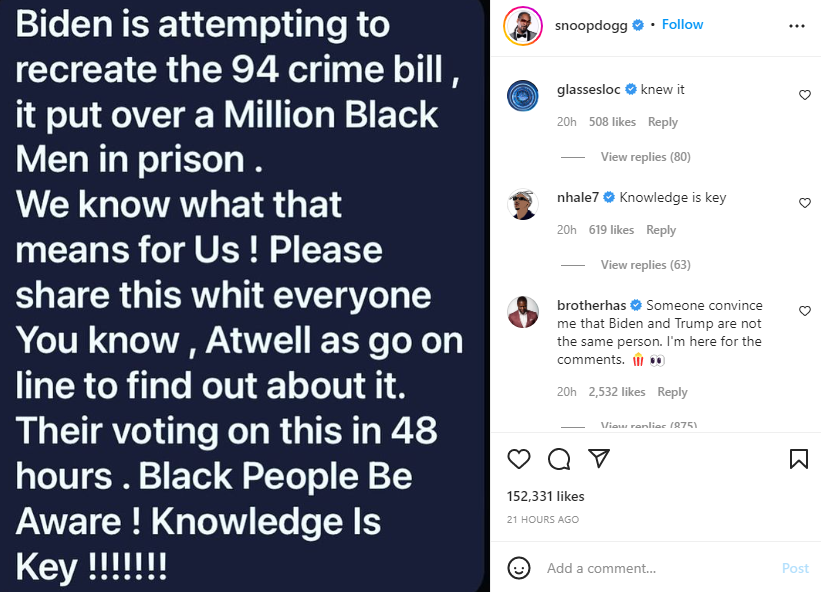 The Biden administration released information about its Safer America Plan (archived here) on July 21, 2022. The fact sheet for the plan contained explanations of what the plan aimed to accomplish, including increased funding for police, harsher penalties for fentanyl trafficking, investment in crime prevention and more funding and policies to aid in gun control.

Analyses from the Brookings Institution and the Brennan Center for Justice explain that while the 1994 crime bill did significantly impact incarceration in the country, the bill alone was not directly responsible for mass incarceration. An explainer from Vox also reaches this conclusion. None of these analyses, nor other evidence, suggest that one million Black men were incarcerated as a result of the 1994 crime bill.

The 1994 crime bill was one of many laws that continued a trend already set by the federal government to take tougher punitive measures. Researchers seem to agree that such measures were made more blatantly discriminatory after the enactment of the Anti-Drug Abuse Act of 1986. The 1986 anti-drug bill led to a disparity between crack cocaine and powder cocaine sentencing, with crack cocaine carrying a much lower threshold for sentencing. It is generally accepted that the 1994 crime bill exacerbated the 1986 anti-drug bill's impact.

The rate of state prison growth slowed from about 7% annually in the years preceding the Crime Bill's incentive funding to less than 3% annually while such funding was available and during the years that followed.

The funding incentives did not drastically affect state sentencing and release policies.

Other Lead Stories fact checks related to the 1994 crime bill can be found here.