THE RISE OF FEMINISED MEN

ATRAZINE IS A HERBICIDE THAT CHANGES YOUR GENDER 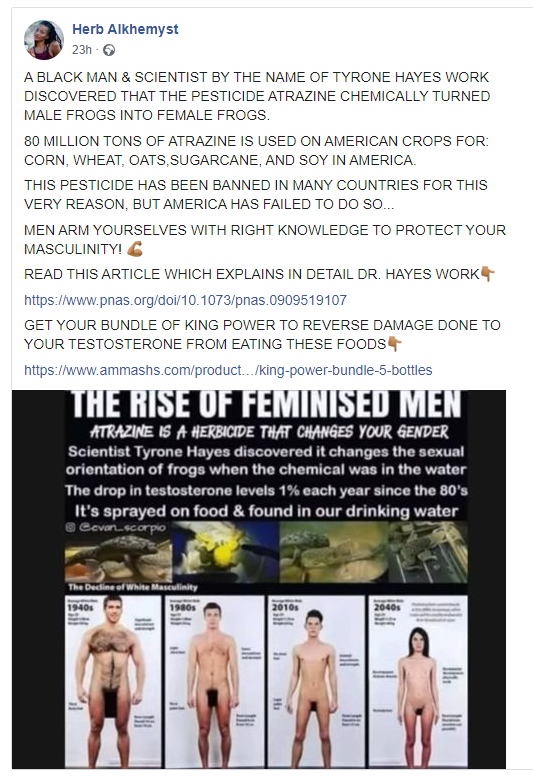 Atrazine is one of the most widely used pesticides in the world. Approximately 80 million pounds are applied annually in the United States alone, and atrazine is the most common pesticide contaminant of ground and surface water.

The study says about amphibians:

Perhaps the most dramatic finding here is that hermaphroditism observed at metamorphosis in animals exposed to atrazine can ultimately result in complete feminization. The complete feminization of males exposed to atrazine is consistent with two previous studies that showed that atrazine feminizes zebra fish (Danio rerio) and Xenopus laevis and a more recent study that showed that atrazine exposure feminizes leopard frogs, Rana pipiens. These previous reports based their findings on shifts in the sex ratio, however; our study showed that atrazine-induced females are indeed genetic males. Furthermore, we showed that feminization is persistent and complete, resulting in reproductively functional females capable of producing viable eggs. Together, the present data and these three similar reports suggest that sex-reversal by atrazine (complete feminization of genetic males) is not a species-specific effect but rather one that occurs across nonamniote vertebrate classes.

Nowhere does the study say that human gender can be changed due to Atrazine. It does say it is a "potent endocrine disruptor" in "human cell lines."

The Environmental Protection Agency (EPA) released a Refined Ecological Risk Assessment for Atrazine in 2016 that said:

Many uncertainties and concerns have been identified in study protocols and results of the available amphibian data. Therefore, it is difficult to make definitive conclusions about the impact of atrazine at a given concentration but multiple studies have reported effects to various endpoints at environmentally-relevant concentrations.

On October 30, 2020, the EPA's issuance of the atrazine ID (interim registration review decision) was challenged (under II. Background) but made no mention of gender change in humans as a concern. On July 5, 2022, the EPA announced the availability of its proposed revisions and is soliciting public comment.