Did the restart of experiments at the CERN subatomic particle collider on July 5, 2022, cause time travel at the organization's headquarters along the border of France and Switzerland? No, that's not true: There's no evidence that anything of that nature has occurred.

The upgrade of the Large Hadron Collider (LHC) has captured the imaginations of spiritualists, psychics, doomsayers and would-be prophets. Popular hashtags and terms associated with it include the Mandela Effect, portals, 5D or fifth dimension and time-shifting/time-jumping.

Did CERN time travel right in front of us or did they actually lie about it being live??? Wtf is going on here... I guess, y'all be the judge. Tell me. Lol
#CERN #WHATDAYISIT 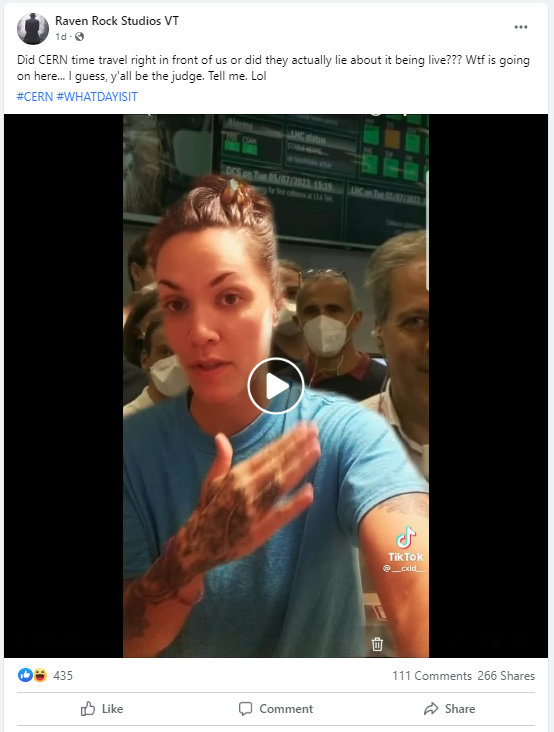 The fast-moving 65-second video begins by showing a display at CERN (the name comes from the acronym for the French Conseil Européen pour la Recherche Nucléaire, or European Council for Nuclear Research) that appeared in the background during a live video feed of the restart of experiments on July 5, 2022. It shows a date of April 25, 2022, just three days after the collider was restarted. A red oval marks the spot, along with "April?" and a hmmm emoji: 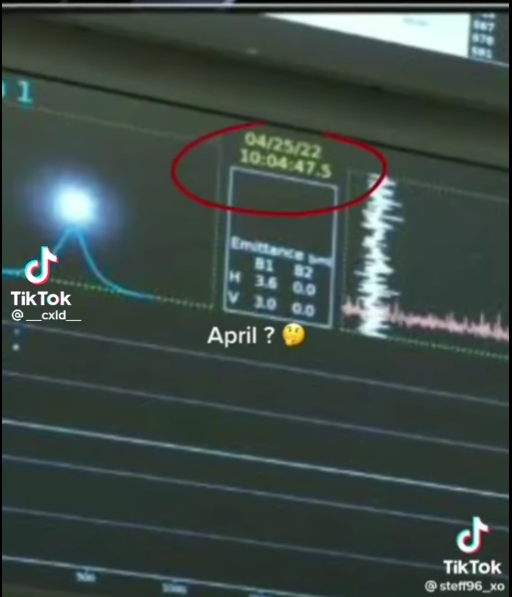 Next, the narrator enters the frame and begins her case by pointing to another date and time on a display screen from the ALICE experiment at CERN. She argues the time shown -- 15:19 (3:29 p.m.) -- is another indicator that time travel occurred. There's no problem with the date, July 5, 2022, because that's when the restart at CERN happened. It appears as 05/07/2022 on the display, using the day/month/year convention for expressing the date. In the United States, it would be month/day/year or 07/05/2022.

The second image the narrator refers to is from a question-and-answer session following the restart, which took place at 4.47 p.m. local time. Because the display shows a time more than an hour earlier, she claims it as evidence of time travel: 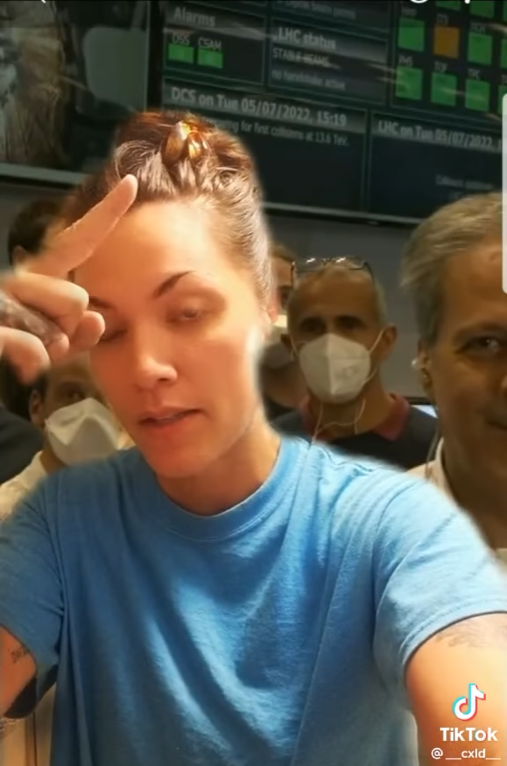 If the time references pointed out in the video were from a clock, the narrator might have the beginnings of a time-travel case, but that's not what these are. The displays monitor the performance of various aspects of the LHC. Think of them as snapshots showing what was going on at those times with the collider.

The video of the live stream posted to the CERN website includes plenty of time references that check out -- before and after the official restart. At 10:41 into the video, the clock in the upper left-hand corner of the screen shows it's about 4 p.m.: 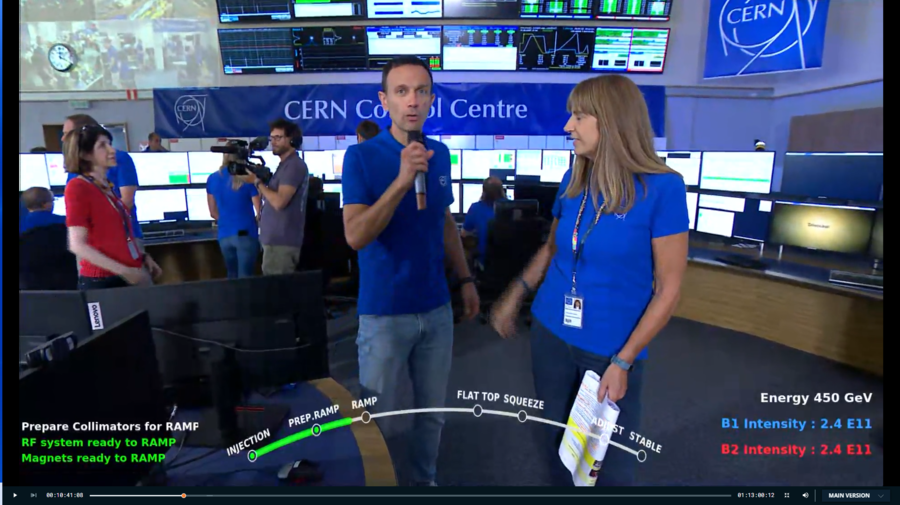 About a minute later, at 11:39 in the video, the clock on the wall and the wristwatch on the reporter show it's just after 4 p.m.: 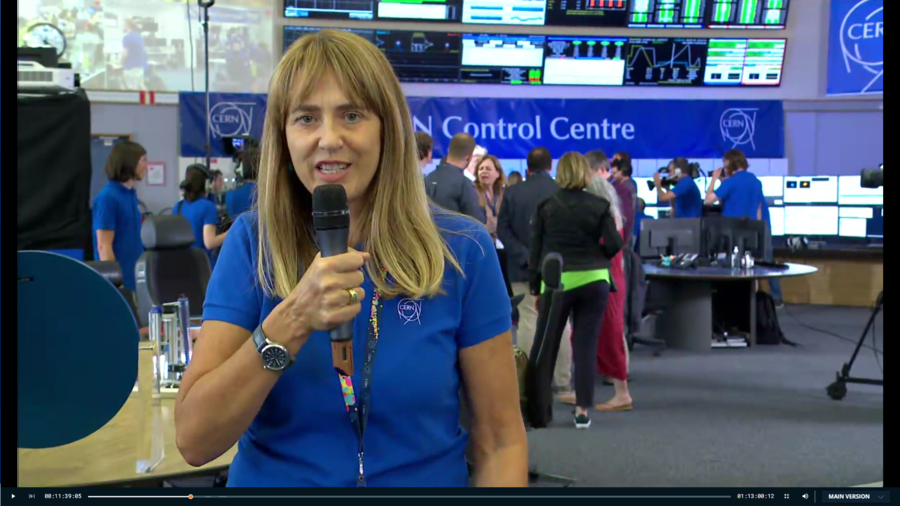 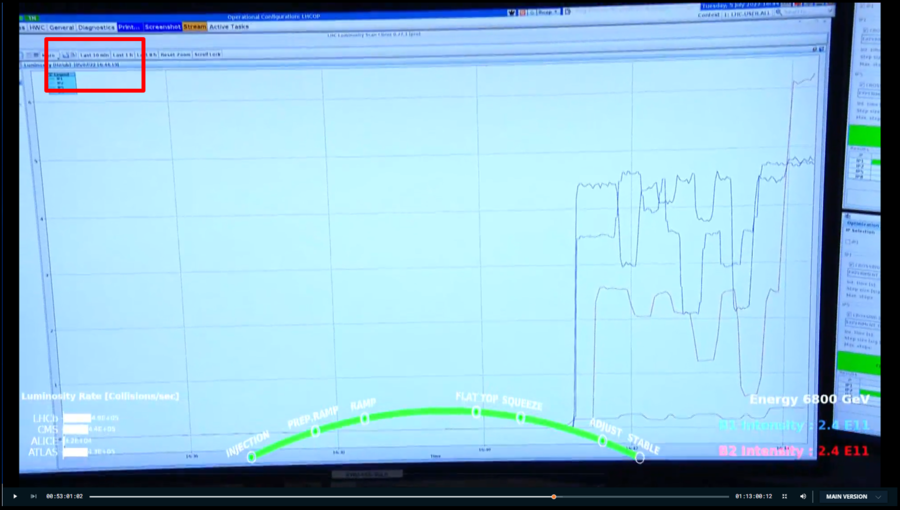 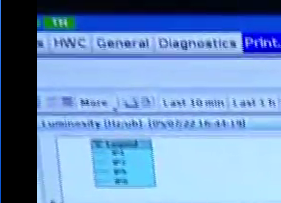 Now, returning to the wall clock at nearly 57 minutes into the live stream, it reads about 4:48 p.m., or a minute after the official restart of experiments, just as smiling scientists take in their moment in history as the collider reaches a record energy level: 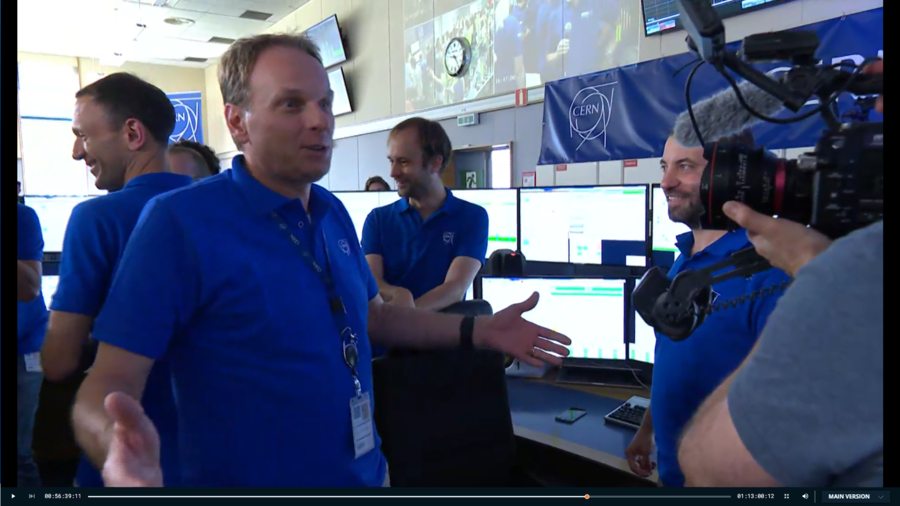 Both before and after the official restart of experiments at CERN, the live video and the timepieces in it correlate with each other. There appears to be no time-shifting or time-jumping.

But just so the science is clear, Albert Einstein's early 20th-century theory of relativity says that time travel is possible, or at least isn't impossible. It essentially says we live in a four-dimensional continuum -- space-time -- in which space and time are interchangeable.