Does a video of Ukrainian soldiers captured by the Russian army prove that their Ukrainian counterparts were killing civilians in Rubizhne, a town in the Luhansk region in eastern Ukraine, in spring 2022? No, that's not true: The words of the POWs are not supported by any visual evidence or documents. Not a single reputable source in any language mentioned the described event -- the claim was only shared by Russia-backed platforms, QAnon supporters and men's rights activists.

On April 14, 2022, the English-language clip containing the claim appeared (archived here) on the U.K.-based video platform BitChute, known for hosting YouTubers banned on major social media platforms. Using the Russian spelling of the Ukrainian town of Rubizhne, the headline said, "Ukrainian soldiers confirm they were ordered to kill civilians in Rubezhnoe."

During a special operation in the town of Rubezhnoe, six soldiers of the National Guard of Ukraine voluntarily surrendered to the advancing units of the people's militia.

At the 00:19 mark, as the trio of men wearing military uniforms appears in the frame, the voice-over says:

Our commander forced us. There was an order to shoot to kill at any moving person regardless of whether he was a civilian or not. Then, at some point, they brought people there. There were women and men among them.

As the men remained in the frame, the voice-over continued: 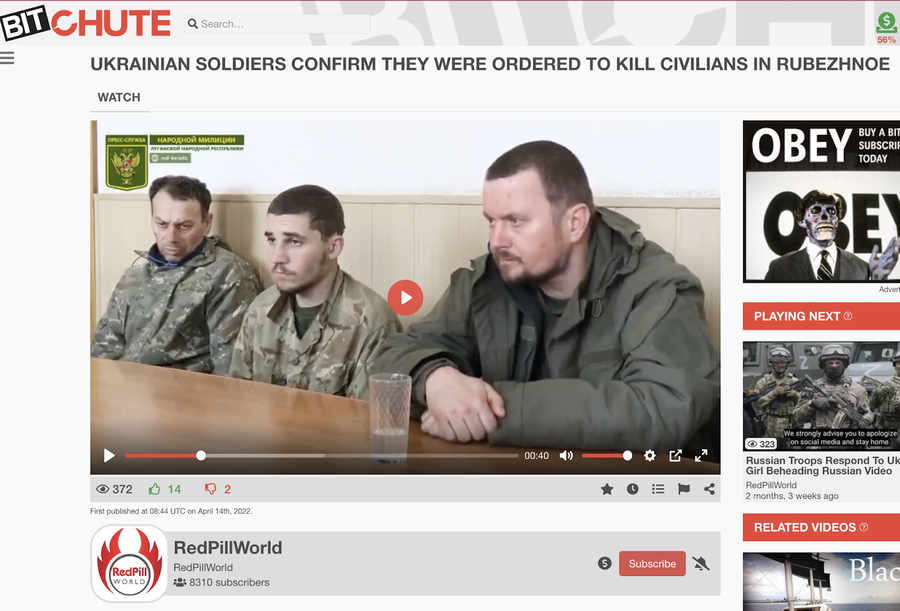 The upper left corner of the clip points to the source of the video: It shows the logo of the people's militia of the Lugansk People's Republic, described as a temporarily occupied territory by Kyiv officials. In fact, four days earlier, on April 10, 2022, the account of the Lugansk people's militia posted an identical video in Russian (its duplicates can be found here and here): 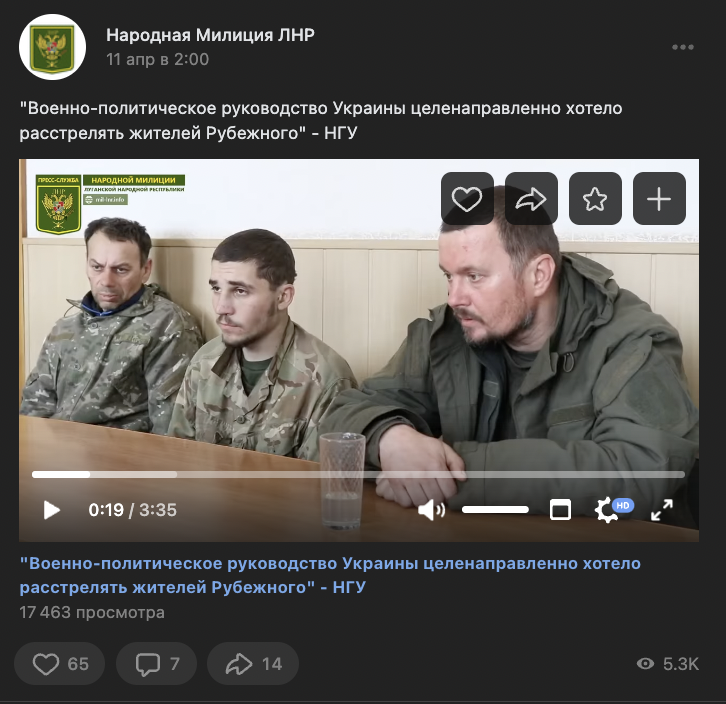 The Russian-language audio clarifies that the man talking on camera said that the reason for the alleged order to kill civilians was revenge for what was done in spring 2022 in Bucha (a city in the Kyiv region), not Bucka as mispronounced by the English-language narrator. That could have been intentional to mislead the audience.

There are reasons to believe the BitChute video was not even created by the user who posted it. In April 2022, SouthFront.com published a press release that contained a link to the same fully edited and narrated English-language video available to be downloaded for free: 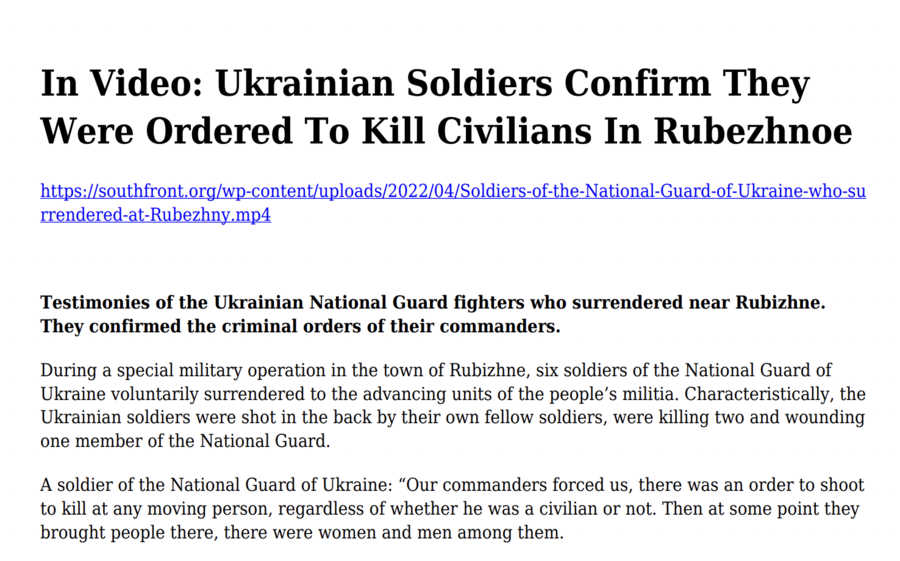 According to the European Union's disinformation database, SouthFront.com is a multilingual Russia-backed website that masquerades as a source of independent reporting and analysis but, in reality, repeats the Kremlin's talking points.

The world learned about the March 2022 mass killings of civilians in Bucha only in April, when the Russian forces left this formerly quiet residential suburb of Kyiv. In response to the accusations of possible war crimes, Russian authorities simultaneously denied the fact of the massacre, claiming that it was staged, and blamed Ukrainians for killing residents of Bucha. Lead Stories has already debunked these claims here and here.

By saying that the alleged order in Rubizhne was an act of revenge for Bucha, the POW refutes the Russian claims, too. Other details of his on-camera story, however, are not supported by evidence. On May 10, 2022, the U.N. human rights monitoring mission in Ukraine warned that the civilian death toll might be much higher than what was officially reported at the time. Rubizhne was one of the localities of particular concern due to heavy fighting and indiscriminate shelling by Russian forces. However, not a single reputable American, European or Russian independent source described the episode the man in the video referred to.

Moreover, his story contains inconsistencies and lacks key details. According to the man, his group consisted of eight men, but two were killed during their escape. However, we only see three in the frame, and it's unclear what the destiny of the others was after they became POWs. The man omits how he knew that the people in question were civilians, whether they were moving or not and what happened to them when he and other men from the group refused to follow the order, given that, according to the video, there was enough manpower to put the alleged armed rebels under arrest.

What is also remarkable is that the man emphasizes that the people who gave the purported order to kill civilians were not with the regular army or National Guard. He says they were "some volunteer battalions" whose names he couldn't recall, contradicting his own words about "our commanders" demanding to shoot. The man does not explain why his group was expected to take orders from a randomly arrived militia.

Under the Geneva Conventions, prisoners should be protected "against acts of violence or intimidation and against insults and public curiosity," which prohibits captors from videotaping or broadcasting POWs. They may be forced to say anything their captors want them to say. Both BitChute and Vk clips contained the same images showing captured soldiers forced to lie on the ground or being escorted by an armed guard: 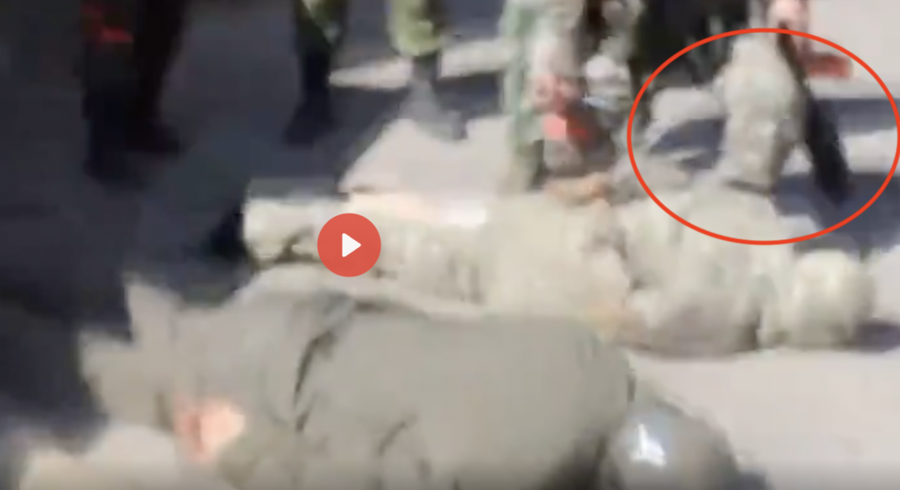 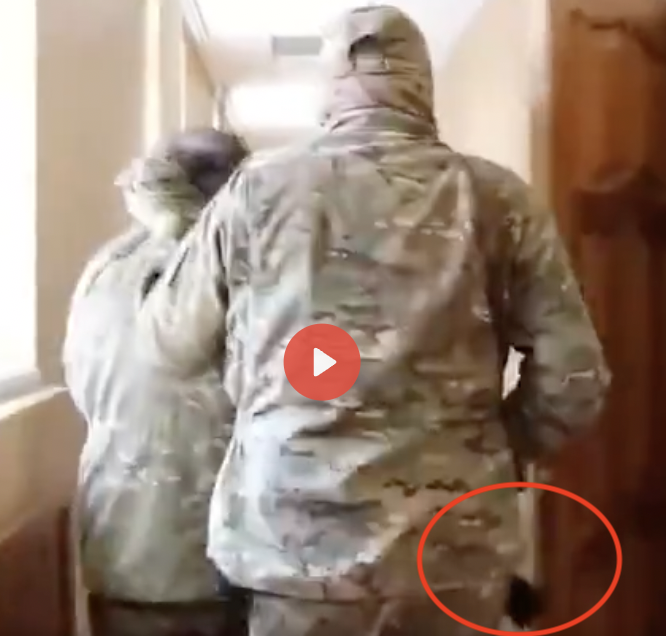 One of these shots captured a man from the video blindfolded: 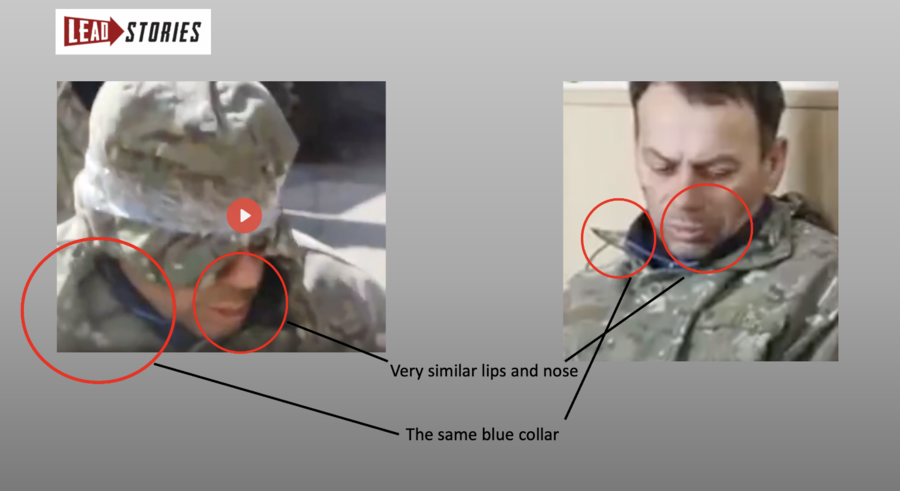 This suggests that the men could have been under pressure before making the on-camera appearance, casting doubts on whether or not they surrendered as voluntarily as the English-language video claimed.

Nevertheless, the claim continued to spread. It was published on one of the QAnon resources, 8kun, previously known as 8chan, that used a Russia-based DDoS-Guard service in 2020 to return online: