Does the student loan forgiveness program announced by the Biden administration on August 25, 2022, treat canceled student debt as taxable income? No, that's not true. Although debt cancellation is usually considered taxable, the Biden student debt relief falls under the American Rescue Plan, which exempts most student debt relief from taxation through the end of 2025.

The claim appeared in an August 25, 2022, Facebook post under the title, "That free money is now considered income. This explains the extra IRS agents!!! No such thing as a free lunch." 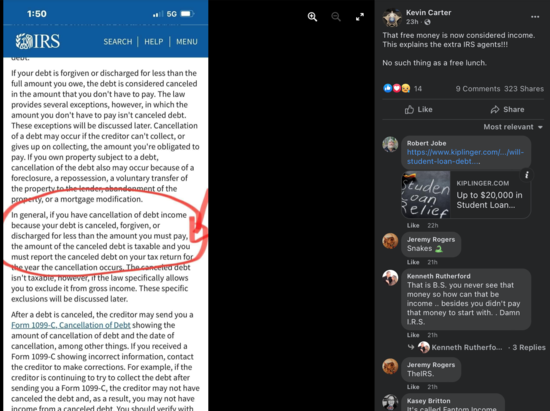 The information shown in the post is from an IRS tax code information page that carries the heading, "Topic No. 431 Canceled Debt - Is It Taxable or Not?" The page provides broad information about the potential tax liability related to the cancellation of some types of loan debt under the US tax code, but not student loans.

The post also cut off the portion of the page that includes a link to information about IRS Revenue Procedure 2020-11, which provides specific guidance about discharged student loans, for students and their creditors.

Furthermore, the post fails to direct readers to information about changes in the tax code under the 2021 COVID-19 relief bill known as the American Rescue Plan Act (ARPA) which excluded most canceled student debt from gross income for tax years 2021 through 2025.

According to a fact page issued by the White House following Biden's student debt relief announcement, loans forgiven under the program are covered under the ARPA and "will not be treated as taxable income for the federal income tax purposes."

"Under current law, there is no confusion. It won't be taxed," said Tom O'Saben, director of tax content and government relations for the National Association of Tax Professionals.

Beyond 2025, however, if no additional forgiveness policies are adopted, "we go back to the rules" he added. That means that if an individual has borrowed money and no longer has to repay it, "it typically become part of their gross income. It would be taxable."

A myriad of laws or orders could be enacted between now and the end of 2025 to continue debt forgiveness, O'Saben said, and would require an act of Congress or an executive order, if it was decided that such orders carry the weight of being able to vacate debt.