Did political commentator Ben Shapiro receive a Paycheck Protection Program loan (PPP) loan of more than $20,000 that was later forgiven? No, that's not true: Shapiro did not receive such a loan. Rather, an individual with the same name as Shapiro was given the loan for their real estate business and received loan forgiveness.

It included a screenshot of a page from the ProPublica "Tracking PPP" website. The page featured a loan recipient named Ben Shapiro who received $20,832 PPP loan. The forgiven loan amount was $21,079, which takes any accrued interest into account. 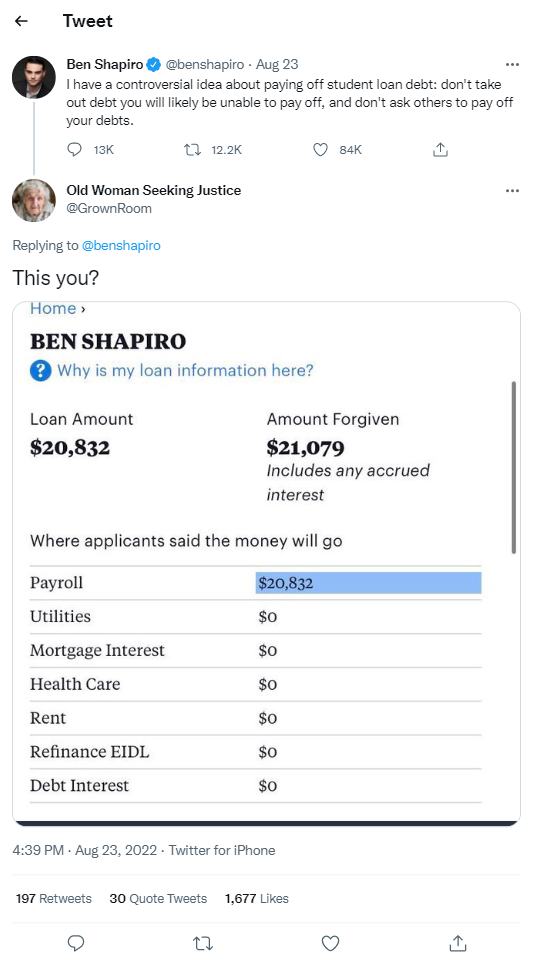 The Small Business Administration (SBA) describes the PPP loan as:

An SBA-backed loan that helps businesses keep their workforce employed during the COVID-19 crisis.

The program ended on May 31, 2021. The loans were designed to be forgiven if certain requirements were met.

Shapiro the commentator is not a real estate agent. Shapiro is part owner of Bentkey Ventures, which owns the media outlet The Daily Wire. Lead Stories searched the "Tracking PPP" website to check whether Bentkey Ventures or The Daily Wire received a PPP loan. We did not find any evidence that the companies did.

Shapiro's thread is embedded below:

In short, Twitter is filled with gullible rubes who will believe nearly anything based on a partial screenshot.