Is herpes a parasite that "you can flush out of your body"? No, that's not true: Herpes is caused by the virus known as herpes simplex virus (HSV), experts from the Mayo Clinic and UCLA told Lead Stories. The infection caused by the virus cannot be cured but it can be treated with antiviral medication. It cannot be flushed out of a person's system.

The claim appeared in an Instagram video on August 15, 2022. It opened:

If you struggle with herpes stop scrolling! 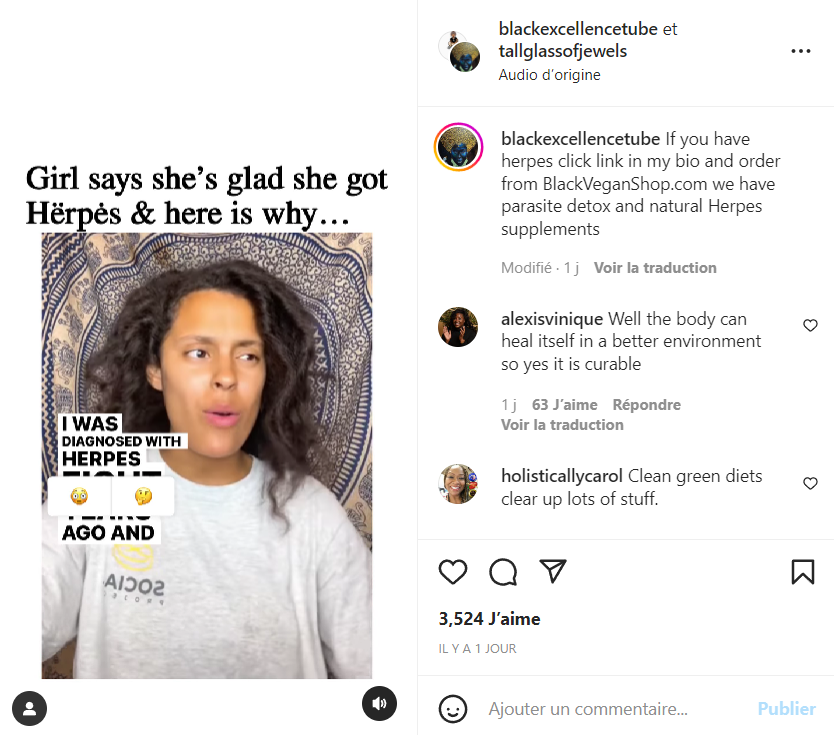 The 1:09 video was originally posted on TikTok under the account "The Alkaline Traveler," where they ask followers to "Join me on my travels to Wholeness 🌱🍇." The person in the video claims they were diagnosed with herpes and discovered a miracle cure:

If you struggle with herpes stop scrolling! I was diagnosed with herpes eight years ago and to be quite frank with you, I'm actually happy it happened because I wouldn't be here today to tell you that you can actually heal yourself from herpes and it's not a virus that stays with you for the rest of your life. It's actually a parasite that you can flush out of your body.

Matthew Binnicker, director of clinical virology at Mayo Clinic in Rochester, Minnesota, told Lead Stories via email on August 16, 2022, that the claim in the video was false:

Herpes is not caused by a parasite. Instead, it's caused by a virus, known as herpes simplex virus (HSV). After a person is infected with HSV, the virus undergoes what is called 'latency', where it can enter a period of dormancy and reactivate at a later point. In other words, once a person is infected with HSV, it can't be flushed out of the body.

The person in the video cites two articles as "proof" that herpes is a parasite. The first, titled "Intestinal Worm Infection Can 'Predispose Women To Viral STIs,'" was published on Health Policy Watch in 2021. This article does not say herpes is a parasite. It is referencing a study published in Cell Host and Microbe that "discovered that intestinal worm infection can change and increase the likelihood of Herpes simplex virus type 2 (HSV-2) infection, which is the main cause of genital herpes." The article noted:

'We have found that intestinal worm infection can change female reproductive tract (FRT) immunity by causing a worm associated immune response in the FRT, even though the worms never reside there,' said Dr William Horsnell from UCT's Institute of Infectious Disease and Molecular Medicine, the lead author.

The person in the video cites a second article published in Frontiers in Microbiology titled "Herpes Simplex Virus: The Hostile Guest That Takes Over Your Home." That article opens, "Alpha (α)-herpesviruses (HSV-1 and HSV-2), like other viruses, are obligate intracellular parasites. They hijack the cellular machinery to survive and replicate through evading the defensive responses by the host."

They are viruses. They use their genetic material inside a cell to reprogram the cell to make more viruses, as all viruses do.

The Centers for Disease Control and Prevention describes herpes on the website as a virus, not a parasite:

Both Binnicker and Yang said the symptoms of herpes can be treated with antiviral medication. "The infection cannot be cured," Binnicker said. "Once infected, a person will be infected with herpes simplex virus for life."

Yang noted, "The drug treatments are available only by prescription. Outbreaks can be associated with stress, and so a person may be able to reduce the chance of outbreaks if they reduce the stress in their lives."