Did 44 percent of pregnant women in Pfizer's COVID-19 vaccine trial have miscarriages? No, that's not true: Author/activist Naomi Wolf incorrectly analyzed public information when making the claim that "out of 50 pregnant women, 22 of them lost their babies." Wolf and two publishers have all retracted the claim, which continued to circulate nonetheless. Jeffrey Morris, professor of biostatistics at the University of Pennsylvania, told Lead Stories that the methodology used to make the claim was faulty. He determined that it appears there were 13 unique patient miscarriage events in the documents but only three of those appeared on a list of 50 women who became pregnant after their first dose of the Pfizer COVID vaccine.

The claim appeared in an article (archived here) published by The Florida Standard on August 16, 2022, under the headline "Massacre: Nearly Half of Pregnant Women in Pfizer Trial Miscarried." It opened:

According to Dr. Naomi Wolf, who runs a crowdsourced project to analyze 300,000 Pfizer documents released via a FOIA request, 44 percent of pregnant women who participated in the drug maker's COVID-19 vaccine trial lost their babies. 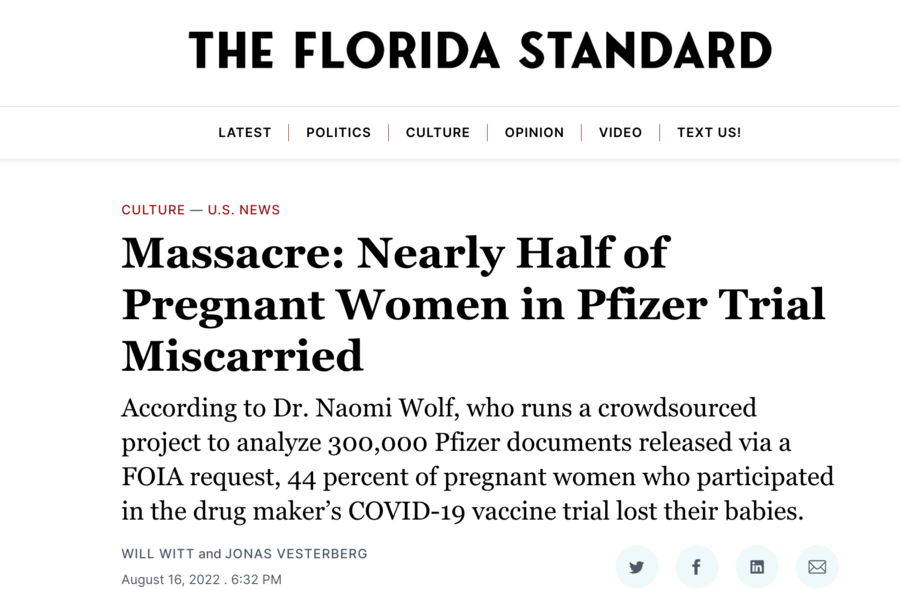 As first reported by American Greatness, research released by feminist activist and author Dr. Naomi Wolf through her website The Daily Clout indicates that 44 percent of pregnant women in Pfizer's COVID-19 vaccine trial lost their babies.

American Greatness updated its story to note, "The Daily Clout has retracted this story after misreading the numbers." Wolf's website The Daily Clout added a line saying, "Correction: 44% figure is incorrect," as seen in a link archived here. As of August 29, 2022, the story is no longer available on the website.

She made the claim on Steve Bannon's "War Room" podcast that aired on August 15, 2022. At 16:01 in the video, Wolf showed a screenshot of The Daily Clout website with an article titled, "Forty Four Percent of the Pregnancies in a Pfizer Study Ended in Miscarriages. Pfizer Misleadingly Reclassified Them." 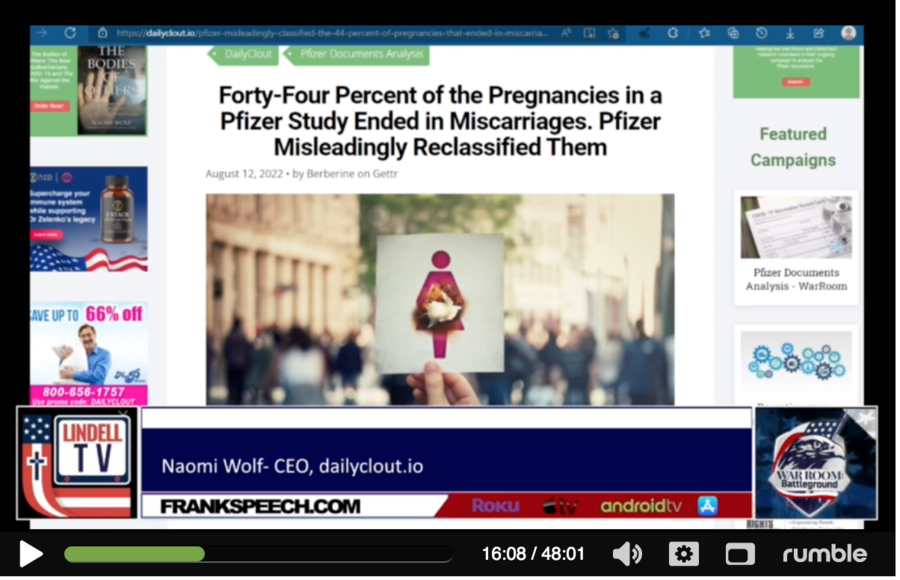 Morris told Lead Stories via email on August 26, 2022, that the methodology Wolfe used to calculate the number of miscarriages and spontaneous abortions was faulty and that the data were misinterpreted.

He noted that they "documented the page numbers of the list of women reporting pregnancy after vaccination (page 3643) and the page numbers of each reported spontaneous abortion/miscarriage (although they had two typos - the page 3560 should be 3530 and 3535 should be page 3546." Here is an archived link from Wayback Machine to the Daily Clout story that listed the pages where the pregnancies were reported in the Pfizer documents.

Morris explained what was correct in the analysis based on the documents:

Morris shared a table he created to check the claim with Lead Stories here. As the table of 50 that Wolf used to calculate the number of women who were pregnant during the trial only includes three women who can be found in the documents, it is not an accurate way to calculate how many women actually had a miscarriage after taking the vaccine.

There is no evidence that there is a causation between the COVID vaccine and miscarriages. The Centers for Disease Control and Prevention recommends COVID-19 vaccines while pregnant or breastfeeding. It also notes that miscarriages typically occur in about "11-16% of pregnancies" in the general population:

Pfizer told Lead Stories via email on August 25, 2022, that they do not comment on social media claims but said:

The vaccine has been shown to be safe and effective for pregnant mothers and is recommended by global health agencies around the world, such as the World Health Organization and the U.S. Centers for Disease Control and Prevention. Numerous peer-reviewed studies and real world evidence have demonstrated that the Pfizer-BioNTech COVID-19 Vaccine is safe and effective.

Lead Stories has reported on false claims about the COVID-19 vaccine and miscarriages here.