Did NATO's most lethal fighter jets arrive in Ukraine? No, that's not true: As a close NATO partner -- but not a member country -- in 2022 Ukraine received non-lethal defensive support in its battle against invading Russian forces, according to NATO's website. The photograph with this claim is from 1998, and is of a partially disassembled F-22 Raptor being unloaded from a U.S. Air Force cargo plane, according to a U.S. public affairs officer at Air Combat Command.

The claim appeared in the headline of an article (archived here) published by Newcarsz.com on August 17, 2022, under the title "Finally: NATO Most Lethal Fighter Jets Arrive In Ukraine." 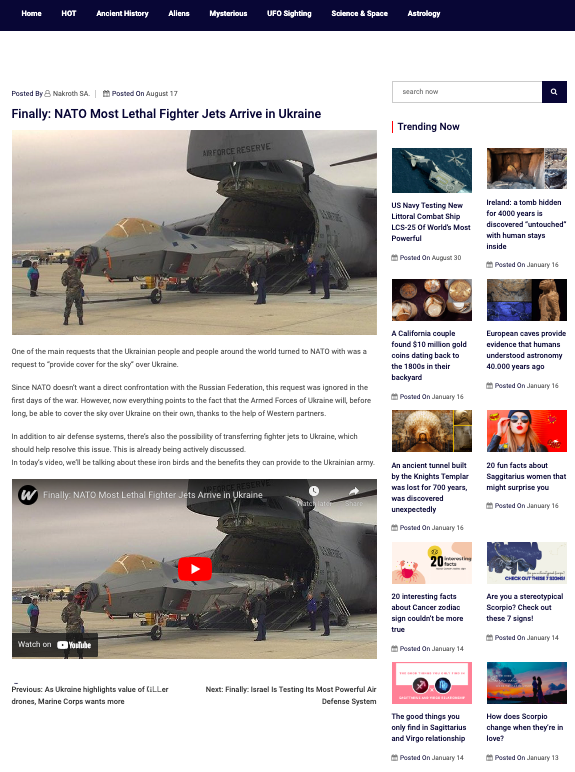 One of the main requests that the Ukrainian people and people around the world turned to NATO with was a request to 'provide cover for the sky' over Ukraine.

The full video accompanying this article is also titled, "Finally: NATO Most Lethal Fighter Jets Arrive In Ukraine." The narration on this video mentions at the 0:30 mark that "there is also the possibility of transferring fighter jets to Ukraine."

This fact check focuses on the main claim and will not go into the compilation of political and military claims made in the video.

The photo in the article does not show NATO jets arriving in Ukraine.

Lead Stories traced the photo to Lockheed Martin's Code One Archive, where it was published with the caption:

5 February 1998: Raptor 01 arrives at the Air Force Flight Test Center at Edwards AFB, California, aboard a C-5 Galaxy from Westover ARB, Massachusetts. The F-22 was partially disassembled for the flight. 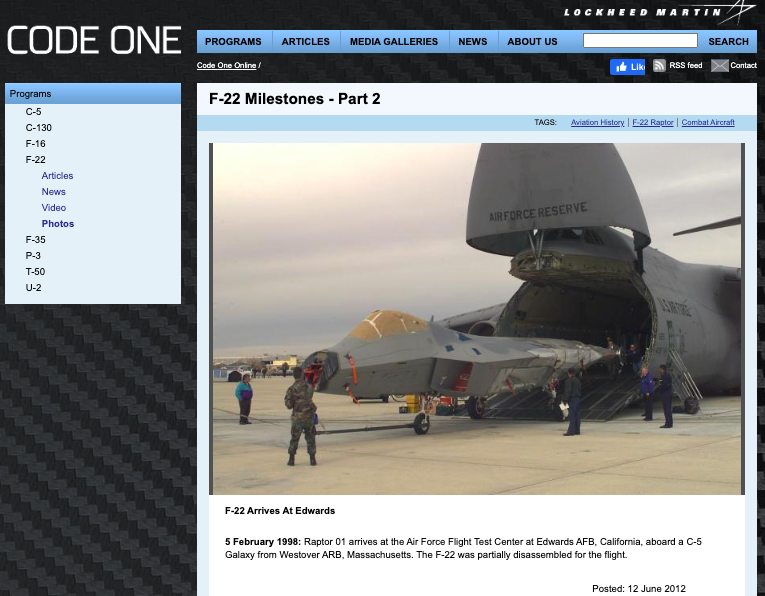 A public affairs officer at Air Combat Command at Langley Air Force Base in Virginia wrote in an email on August 30, 2022, that:

Foreign sales of the F-22 were banned by Congress in 1998, to prevent other countries from gaining access to its classified stealth technology. The F-22s have only been used by U.S. forces and not exported to any other countries, including other NATO members. The F-22 entered service in 2005 and production of it ended in 2011.

In NATO's most recent update of its response to Russia's invasion of Ukraine, NATO made clear it will not take offensive actions:

NATO's actions are defensive, designed not to provoke conflict but to prevent conflict. The Alliance has a responsibility to ensure that this war does not escalate and spread beyond Ukraine, which would be even more devastating and dangerous. Enforcing a no-fly zone would bring NATO forces into direct conflict with Russia. This would significantly escalate the war and lead to more human suffering and destruction for all countries involved.

Lead Stories has fact checked other claims related to the 2022 Russian-Ukrainian conflict. Those articles can be found here.