Was a child saved from being abducted by the actions of a street-smart ice cream vendor who saw something suspicious? No, that's not true: This is a dramatic skit produced as if it were a security-camera view of a close call caught on tape. Although filmed from an elevated perspective, the footage does not appear to be from a mounted security camera as it shakes and follows the action. The makers of these videos have produced at least three similar "abduction averted" skits on the sidewalk of the same ice cream shop.

One video dates back to at least February 8, 2022, and can be seen posted on YouTube. That was followed by a video that went viral on Facebook in early March 2022. A new video was making the rounds on social media platforms in the summer of 2022. One example appears in this July 28, 2022, Instagram post. It opens:

When good Act = Evil loses
#Repost - @ana.ministry by @get_regrammer
It is estimated that between 15k-50k women and children are sex trafficked each year. That's an astonishing number. If you see someone acting suspicious, please don't just ignore it. Usual places like parking lots, alleys, STAY ALERT!!! If you can, walk with pepper spray ready in hand. If you are in places like airports where pepper spray isn't allowed, then use your senses and stay alert of your surroundings.

Most importantly, pray over your children, plead the blood of Jesus to cover our children and protect them from any harm. There is no greater protection than the armor of God!!! 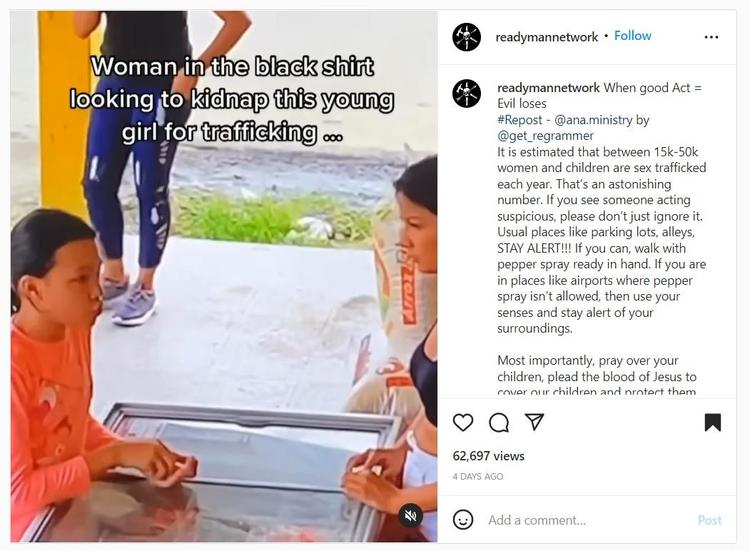 All these skits are based on the same basic scenario: A child is focused on making a purchase while the kidnapper is lurking nearby. There is a car pulled up to the sidewalk with the rear door left open. As the child walks away from the ice cream store, the alert vendor joins the child to ensure they safely get past the car with the open door -- the kidnapper's plan is disrupted. Below is a Lead Stories composite image that shows stills taken from the three different video skits. Each skit features the same ice cream shop with distinctive yellow columns, and the same black compact car.

The National Human Trafficking Hotline for the United States and U.S. territories has a Myths & Facts page that emphasizes as its first point:

Myth: It's always or usually a violent crime
Reality: By far the most pervasive myth about human trafficking is that it always - or often - involves kidnapping or otherwise physically forcing someone into a situation. In reality, most human traffickers use psychological means such as tricking, defrauding, manipulating or threatening victims into providing commercial sex or exploitative labor.

The National Human Trafficking Hotline has published a PDF data report for 2020 that includes a breakdown of the number of contacts (including phone calls, texts, emails and online tips) received by the hotline. In 2020 7,648 situations involving sex trafficking were reported to the hotline.

The U.S. Department of State has a guide for raising public awareness about Trafficking in Persons that acknowledges the difficulty of providing accurate statistics about human trafficking because of the "hidden nature of the crime." The guide offers some statistics from the International Labour Organization:

The International Labour Organization (ILO) and the Walk Free Foundation, in partnership with the International Organization for Migration, released Global Estimates of Modern Slavery in September 2017. This report estimates that, at any given time in 2016, approximately 24.9 million people were in forced labor. Of the approximately 24.9 million people, '16 million were in the private economy, another 4.8 million were in forced sexual exploitation, and 4.1 million were in forced labour imposed by state authorities.' The definition of forced labor used in this report is based on ILO Forced Labour Convention, 1930 (No. 29), which states in Article 2.1 that forced labor is 'all work or service which is exacted from any person under the menace of any penalty and for which the said person has not offered himself voluntarily.'