Does this video show pirates trying to take over a U.S. military ship? No, that's not true: This video shows scenes taken from different sources, but the opening scene -- a small red target boat under heavy machine gun fire, a scenario that appears several times through the video -- shows a target boat that is part of a U.S. Marine sniper-training exercise. It is not a pirate vessel attacking a U.S. military ship.

The pirate attack compilation video was posted on the YouTube channel "Ocean Media" on November 20, 2021. The video, with the same title, "Pirates Attempt To Take Over US Military Ship! (Goes Horribly Wrong)" with orange borders was posted to Facebook on August 13, 2022, by the page Chimede casa. The title, caption and text in the orange borders were the same:

The thumbnail image of the video has the text title: 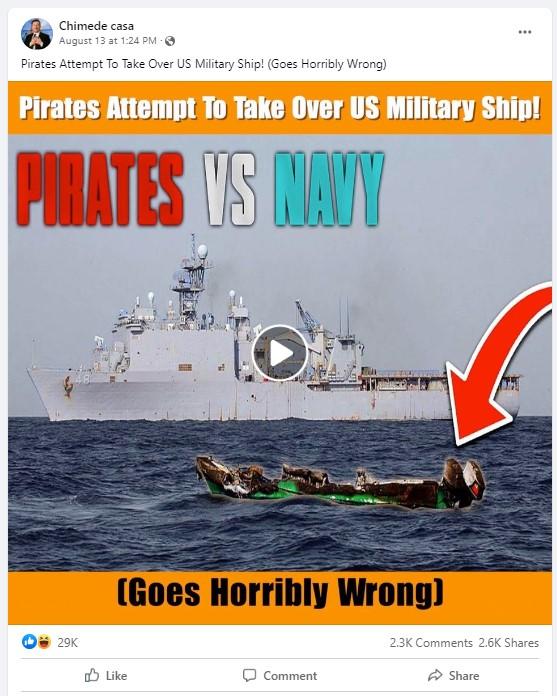 Lead Stories was not able to identify every clip featured in this pirate attack compilation video. The clickbait-style thumbnail image of this video (above) shows the charred hull of a Somali pirate skiff with the USS Ashland in the background. The original photo and others from an April 9, 2010, incident can be seen at dvidshub.net. There is no video footage of this incident included in the "PIRATES VS NAVY" video nor any other identified footage of pirates attempting to take over a "US military ship." A November 7, 2016, article in pilotonline.com titled, "2 Somali pirates receive life sentences for attacking USS Ashland; third gets 33 years" describes the 2010 incident:

The incident with the Ashland began in April 2010 when seven men started out in a small skiff with the goal of capturing a merchant ship they could ransom. But in the early morning light they mistook the Ashland for a cargo ship and opened fire with an AK-47 assault rifle. The Ashland returned fire with its 25 mm gun, killing one of the men and causing the skiff to catch fire.

The Lead Stories composite image below shows two scenes from the misleadingly titled "PIRATES VS NAVY" video (at 0:56 and 0:59 seconds) with matching scenes in a YouTube video titled, "26th MEU COMPTUEX." The YouTube video was posted originally by the 26th Marine Expeditionary Unit on February 13, 2013. The red boat is an unmanned target boat for training; this is not a pirate attack. The screenshots below show the video at 0:49 and 1:05 of the Marine sniper-training video. This same video is also hosted on dvidshub.net, the visual archive maintained by Defense Media Activity with the U.S. Department of Defense. Both the YouTube and dvidshub.net copies are captioned:

Footage of another training exercise on board the U.S. Navy amphibious assault ship USS Boxer on March 28, 2019, (archived here on dvidshub.net) is also utilizing a red target boat. Clips of the footage are interspersed throughout the "PIRATES VS NAVY" video, at 0:01, 0:36 and 2:54-3:33.

Some of the video clips do show encounters with pirates. At the 0:21 mark of the Facebook video a small open vessel is fired upon from a much larger ship, the small boat runs into the side of the ship and then falls behind it, still taking fire. This scene (video on YouTube) was filmed by a body camera worn by a Trident Group Inc. security guard aboard the cargo ship Avocet. According to a May 8, 2012, article in bloomberg.com (archived here) the incident in the Indian Ocean took place in 2011:

At least some of the boats' occupants were probably killed or injured, said Thomas Rothrauff, president of Virginia Beach, Virginia-based Trident Group Inc., which provided the ship's security crew. He said the incident on March 25 last year was the second attempt to hijack the Avocet in three days. After spotting rocket-propelled grenades on the first skiff, the guards feared for their lives. The shootings were justified and the guards acted responsibly, Rothrauff said, firing warnings before aiming at the boat. 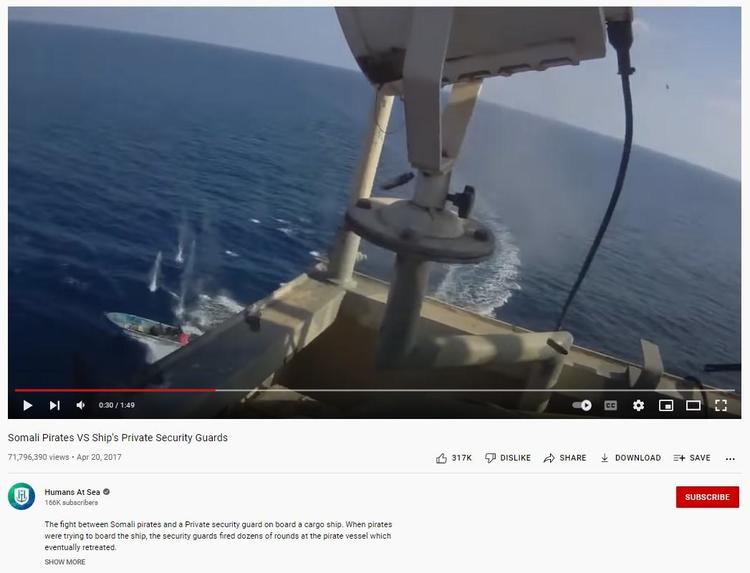 Here is the Dutch army taking out some Somali pirates who actually took over a German ship. A whole shootout happened as the Dutch army boarded the ship. Things got pretty crazy.

This footage shows marines from the Dutch navy frigate Tromp rescuing the German cargo ship MS Taipan from the pirates who had captured it. Helmet-cam footage of the rescue is posted on YouTube. The incident was reported by independent.co.uk (archived here) on April 7, 2010:

What followed was the stuff of a James Bond film: after the Dutch frigate attempted to negotiate with the pirates but failed, a helicopter gunship from the Tromp took off and machine-gunned the bridge of the MS Taipan. Minutes later the helicopter hovered over containers on the bow of the MS Taipan allowing a unit of heavily armed marines to abseil on to the deck, storm the vessel and retake it.

Lead Stories debunked another video claim posted by the Facebook page Chimede casa on another purported pirate attack. You can see that story here.