Was a banner unfurled at Trump Tower in New York City that said, "For more top secret nuclear documents RAID HERE"? No, that's not true: It's a digitally altered video, according to its creator. "Basically the full Adobe Suite," he said.

The altered video appeared in a tweet on September 3, 2022, by the account @PaulLahticks (archived here) with the title: 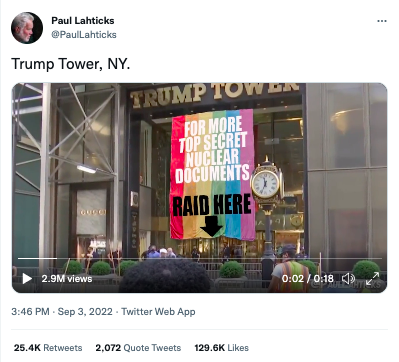 Lead Stories had a question-and-answer session using Twitter direct messenger on September 6, 2022 with the creator of the post. He said Paul Lahticks is a pseudonym because he gets suspended by Twitter "about every six months and has to come up with a new name."

He told Lead Stories that he made this post and others similar to it:

Yeah I made it - and it's not even that well made (I was budgeting time). I've made like 20 of these banners at various Trump towers and ALL of em going viral cuz people think they're real. Which to me, is fine - cuz the point is to publicly ridicule the giant orange Fuhrer.

This one is "digitally altered with Photoshop and After Effects, he said. "Basically the full Adobe Suite."

While he does not call this post a political parody of former President Donald Trump, he did say:

Yeah, and it's not just Trump - it's his followers and ideology. And I don't even make a DIME off of any of this, which sometimes gives me pause ya know ...

He further clarified that he's a "like monster" who gets the same thrill out of a post going viral as when he gambles and hits the jackpot.

But ultimately he said that while he likes to get people "to point and laugh" at Trump:

the point is to

DRAW attention to the cause

At the time of writing other examples of his digitally altered posts are on Twitter and can be seen here and here.