Did a Ukrainian wedding party pose in front of the blue-and-yellow flag of Ukraine and raise their hands in a "Nazi salute"? No, that's not true: The flag in the picture has been altered, and the original photo was taken at the base of a monument to Vladimir Lenin in the Russian city of Novokuznetsk in the Kemerovo Oblast in southwestern Siberia. In the original, the flag shown is black and yellow -- not the blue-and-yellow flag of Ukraine.

The original photo has been online since at least 2016. Articles debunking a version of the photo with a flag in the colors of the flag of Ukraine were published in 2018.

This is a wedding in Ukraine. and they are given the Nazi salute. and we are given billions of dollars to them. 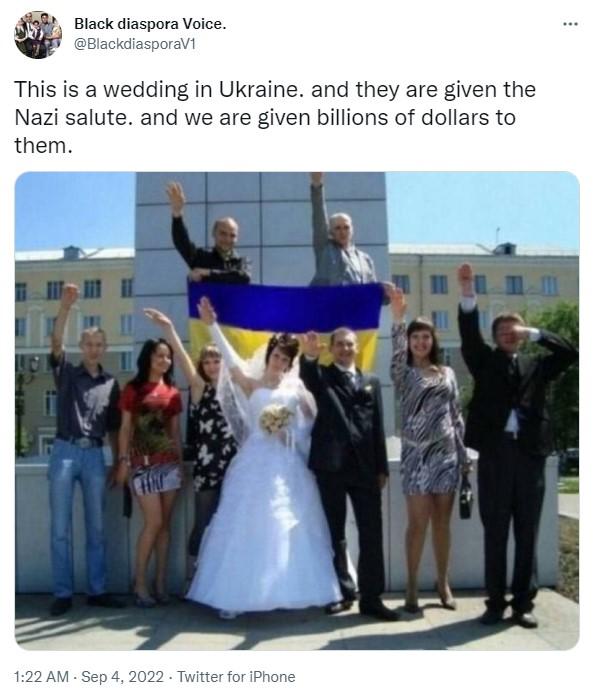 The building and monument base visible in this wedding photo has been geolocated to 38 Lenin St. in Novokuznetsk, Kemerovo Oblast. The composite image below shows the statue of Lenin, and a red pin showing the location of Novokuznetsk in Siberia.

An October 24, 2018, retweet of a collection of screenshots (archived here) features the altered image with the blue-and-yellow flag and captions, both directly and sarcastically claiming these are Ukrainian Nazis pictured in the wedding photo. The retweet also features a full image with the statue of Lenin visible, and the original photo with the black-and-yellow flag visible. 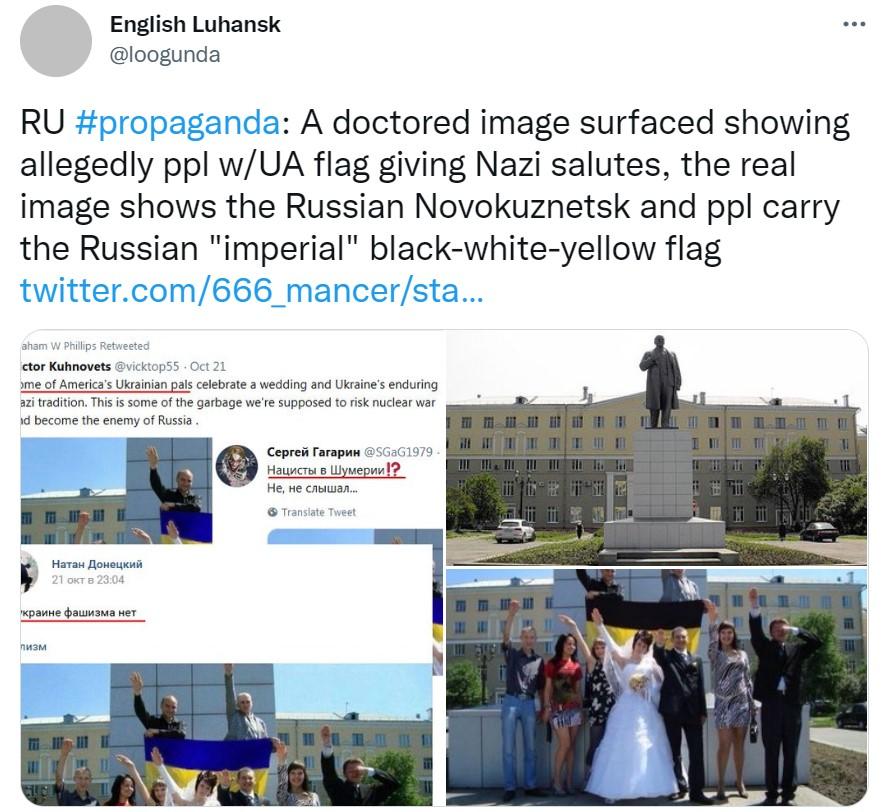 The people standing in front of the flag are obscuring its lowermost portion, but the black, yellow and presumably white flag was the imperial flag of Emperor Alexander II from 1858 to 1896. On February 11, 2015, the Russian state-controlled news outlet rt.com published an article titled, "Flag fail: Nationalists' plan to adopt imperial standard for Russia sinks." It describes an unpopular bill drafted by MP Mikhail Degtyaryov of the populist nationalist party to return to using the former flag of the Russian Empire rather than the current white, blue and red flag of the Russian Federation. The article finishes:

These days the imperial standard is used only by fringe Russian nationalists who blame Yeltsin and his pro-Western policies for most of Russia's present-day problems.