Does a viral video circulated in July 2022 show NASA generating rain clouds and producing its own weather? No, that's not true. A video authentically shows a space shuttle rocket booster test, not cloud creation. The rocket booster in question uses hydrogen and oxygen and the "clouds" shown are steam from the rocket's cooling system.

A video shared on Facebook on July 28, 2022, (archived here) on the threekingsblakemore account claimed NASA is generating rain clouds. A watermark on the Facebook video suggested it was remixed from another video shared to a TikTok account before it was published on Facebook. It read: "That time NASA showed everyone that they make clouds!!" 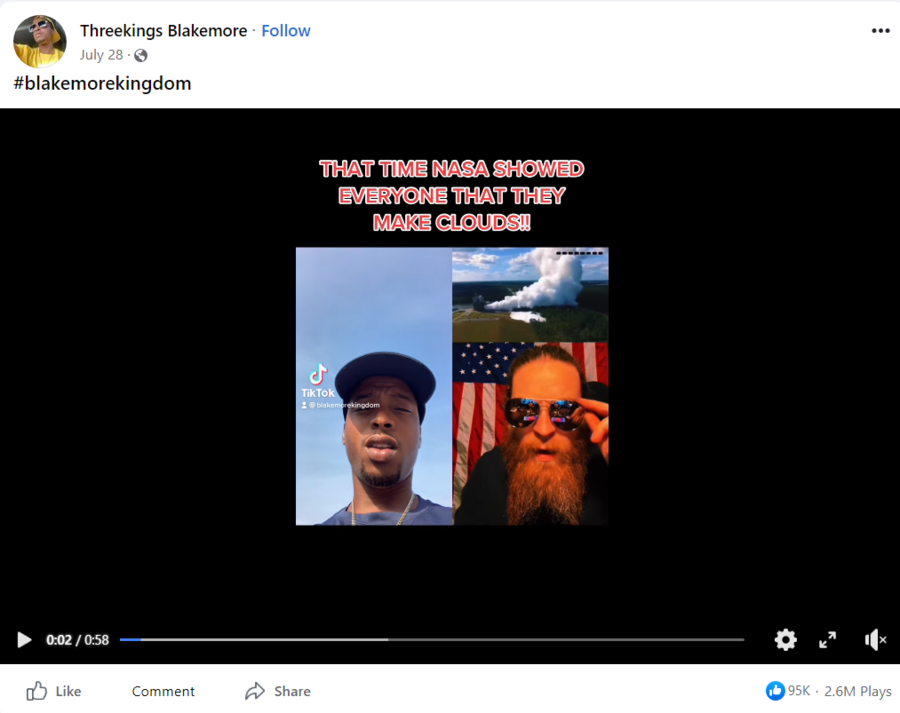 The video itself is authentic, but it does not show NASA intentionally generating rain clouds. Rather, it shows tests being conducted to determine how liquid-fueled rocket engines RS-25 and RS-68 may one day propel rockets into space. Iterations of this claim have been online since at least 2018 and were recirculated in 2019 and 2021. These claims have previously been fact-checked by Times of India, Forbes and Reuters, among other publications.

Lead Stories contacted C. Lacy Thompson, NASA news chief at the John C. Stennis Space Center Office of Communications. In a September 6, 2022 email, Thompson confirmed that the Facebook clip was a compilation of two videos. The first is drone footage that shows the testing of RS-25, while the second piece of footage is narrated by English broadcaster Jeremy Clarkson and a describes a RS-68 engine test on the B-1 Test Stand at the Stennis Space Center in Mississippi.

According to a YouTube caption that accompanied the above-mentioned clip, the video in question was originally posted to the platform on Oct. 29, 2010. It was said to have been recorded in Mississippi, "where NASA test[ed] their Space Shuttle solid rocket boosters."

"Consuming half a million gallons of fuel, they [the rocket engines] generate the thrust needed to propel astronauts into space," continued the caption on the original video.

In the video, Clarkson can be heard saying that the test is "the loudest sound you could possibly conceive and, as it turns out, the cleanest." He goes on to say:

Now, the most amazing thing is that that cloud up there which was generated by the engine is just a mixture of hydrogen and oxygen. It's water vapor and in about an hour's time someone in Mississippi is going to get wet washing. It will actually rain. I told you. It's raining. That's unbelievable. NASA is playing God. It's making its own weather.

Clarkson's declaration has been used to mislead internet users for more than a decade. Thompson told Lead Stories that both RS-25 and RS-68 engine tests use liquid oxygen and liquid hydrogen as propellants, the same elements that, when combined, create water.

"During tests, liquid hydrogen and liquid oxygen are mixed in the engine combustion chamber and ignited, which results in extremely high-temperature exhaust (up to 6,000 degrees Fahrenheit) exiting the nozzle into the flame deflector at a very high rate and pressure. Hundreds of thousands of gallons of water also are flowing into the flame deflector to cool the exhaust and protect the deflector," said Thompson. That's the exhaust that looks like a cloud, Thompson explained:

When the hot exhaust mixes with the water, it creates steam that rises into the atmosphere, forming a cloud that subsequently cools. Depending on the temperature and humidity at the time of the test, this cloud of steam dissipates fairly quickly, although some [of the steam] may condense into water and fall in a very limited and localized area. The steam released during a test is water and does not pollute the atmosphere.

In short, the engine tests can produce a cloud of exhaust that may cause an artificial rain of sorts, but the purpose of these tests is to propel rockets into space, not to control the weather.