Did an internationally recognized legal tribunal go after "Charles Windsor, aka 'King of England'" on September 20, 2022 to hold him accountable for "Crimes against Humanity committed by his parents"? No, that's not true: The "International Common Law Court of Justice" and its "Special Tribunal" do not exist under international law. The claim's assertion that the late Queen Elizabeth II, mother of King Charles III, forcibly removed indigenous children from a Canadian school misrepresents the British monarch's actual powers in Canada. It also placed her in Canada when she was not there.

The claim originated in an article (archived here) published on the Murder by Decree website on September 19, 2022. The article opened:

Breaking News, September 19/20, 2022: King Charles ordered to appear before International Tribunal over the death of William Combs and Others.

In addition to the textual version of the claim, the article also contained a YouTube video hosted by Kevin Annett, a Canadian behind this one-man blog. 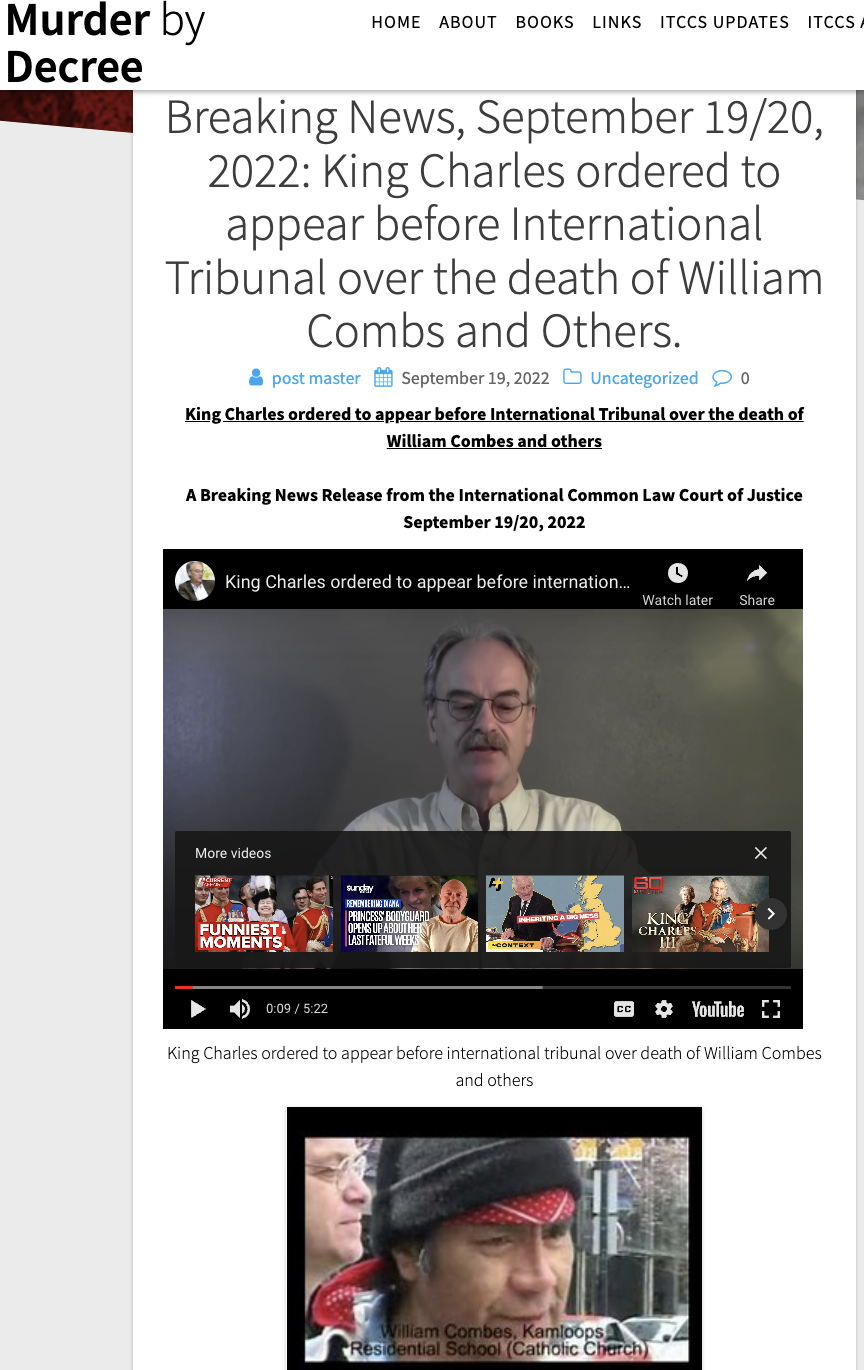 International tribunals are the courts established to prosecute crimes against humanity in a particular locality during a specific period of time. In the case of such an event, not only would it be a major news story extensively covered by media across the globe, but there also would be multiple public records related to the tribunal's work. An example is the international tribunal over violations of humanitarian law in Yugoslavia in the early 1990s.

However, no official documents confirm that a "Special International Tribunal" (capitalized as in the original) was established, as Murder by Decree claims, "to investigate Charles' knowledge of and complicity in Crimes against Humanity committed by his parents, Elizabeth and Philip Windsor, and their Church, State, and Corporate accomplices."

Despite its formal-sounding name, the so-called "International Common Law Court of Justice" doesn't exist, either. A 2012 article that describes its formation does not mention a founding treaty among international signatories. Its contact information, attached to the article in question, includes an email address ending with @gmail.com, which shows it is not affiliated with any institution or organization: 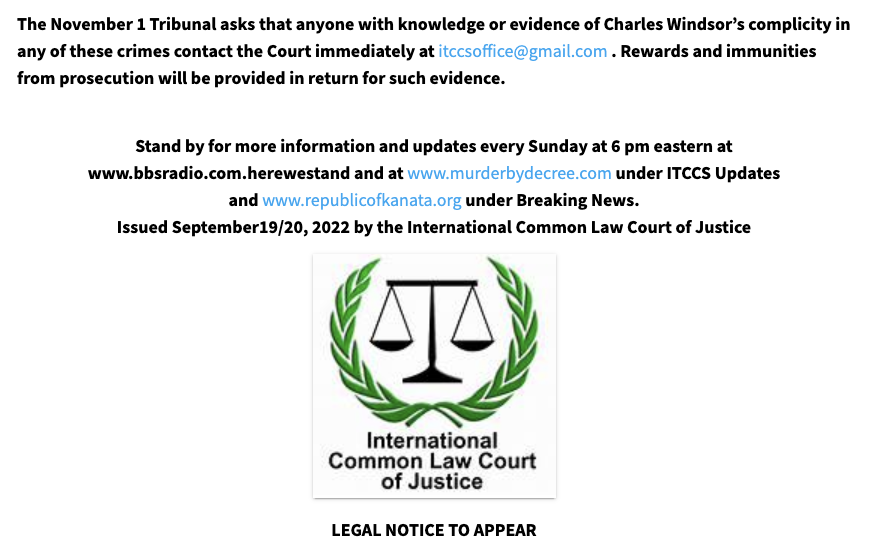 The essence of the claim contains other false statements already debunked by Lead Stories here and here.

A man called William Combs, whose name is in the post's headline, was described as a witness to the alleged crimes.

In 2010, a year before his death, Combs issued a statement claiming that he was a witness to his classmates' disappearance after they had attended a picnic with Queen Elizabeth and her husband, Prince Philip, Duke of Edinburgh, in September 1964. However, the queen did not visit Canada at the time -- she arrived a month later, in October 1964, and their itinerary did not include the Kamloops school in British Columbia that Combs said he attended. Instead, she went to Charlottetown, Québec and Ottawa.

The Kamloops school was one of the largest educational facilities for children of the Shuswap people. In 2021, dozens of human remains were discovered at the site. By September 2022, 51 names of the deceased students were known. Before that, survivors' testimonies had been collected by the National Centre for Truth and Reconciliation for years. Its reports concluded that students suffered harsh treatment, including physical punishments, malnourishment and sexual abuse.

However, there is no indication that Queen Elizabeth was personally involved in the disappearance of any children at Kamloops school. She served as Canada's head of state, but without direct powers over Canadian policies.