Does this video show a reliable test to determine if a hotel mirror is a standard mirror or if it is "fake"? No, that's not true: The test shown, frequently done with a finger and called "the fingernail test," is not a foolproof way to tell if a mirror might be a two-way mirror, which would enable a person or camera on the other side of the glass to see in the room. The test in the video is a reliable way to tell if a reflective surface is on the front or back surface of the glass, but this alone does not conclusively determine if this is a standard mirror or a two-way mirror.

The video was posted on Facebook by the page Funny Reels on August 25, 2022. It was captioned:

The text caption on the video reads:

The 10-second-long video shows a person placing the end of a tape measure against a mirror. This post suggests that this is a test to determine if the mirror is a two-way or one-way mirror (both terms are correct). The end of the tape measure does not touch its own reflection. The depth of that gap shows the thickness of the mirror's glass, which demonstrates the reflection is coming from a reflective surface on the back surface of the glass.

The "fingernail test" is a version of the same test to see if the reflection is coming from the first or second surface of the glass. Posts with an illustration of the fingernail test have circulated on Facebook since 2010.

The confusing message of the video runs contrary to the message in the decades-old warnings encouraging people to conduct a quick and free fingernail test on mirrors they might question. The video shows a space but is coupled with a caption that says, "Not good." While the fingernail test post says the opposite with a rhyming memory aid -- "No space, leave the place". Neither of these suggested tests offers a foolproof way of determining if a mirror is two way. 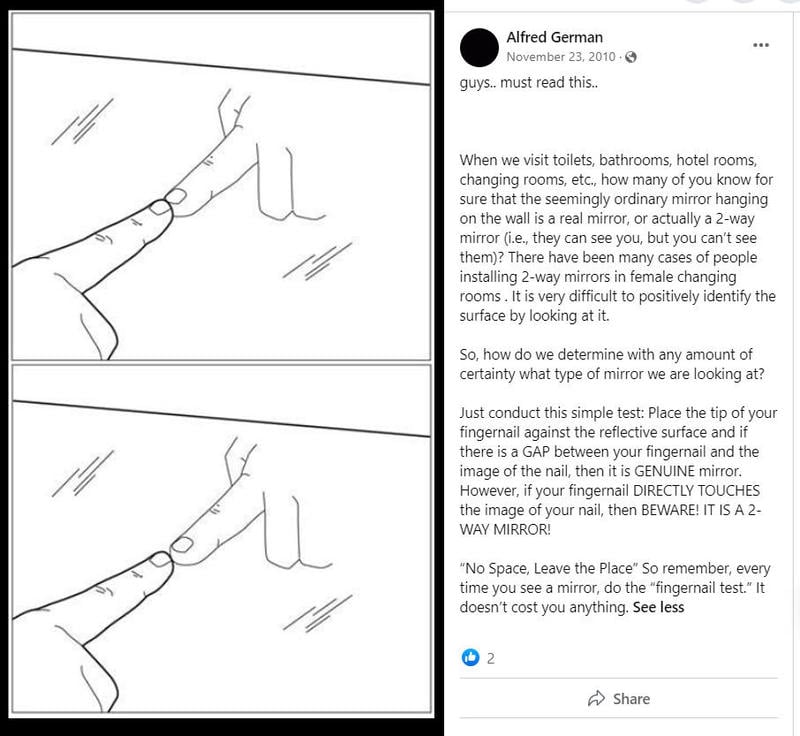 Standard and two-way mirrors can be made in different ways, and the reflective surface can be on the first or second surface of the glass. First-surface mirrors, with an aluminum mirror coating, are used in special applications like photography, eye exams and astronomy. These high-precision mirrors will "fail" the fingernail test. Another type of mirror that will fail the fingernail test is a shatterproof solid metal sheet that has been polished to a mirror finish. Of course it is impossible to see through sheet metal from the other side, so these cannot be two-way. 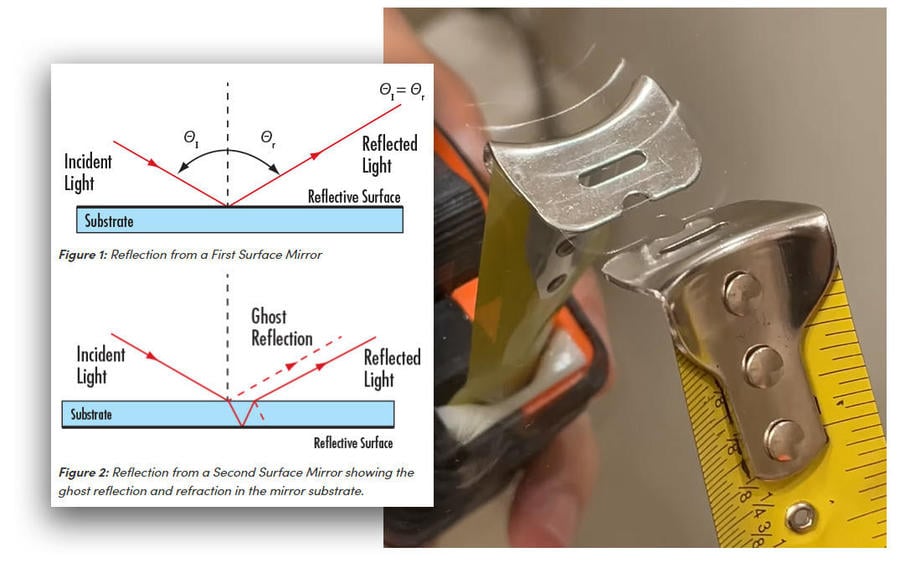