Does this video show an incident that recently happened in Russia, where a conscript was knocked down and run over by an armored personnel carrier? No, that's not true: This accident happened eight years ago, on June 12, 2014. During the swearing-in ceremony of Russia's 83rd airborne brigade, an armored personnel carrier knocked down and ran over one of the paratroopers who was standing at the corner of the formation. This happened on a Russian parade ground in the town of Ussuriysk, Primorsky Krai.

The accident captured in this video happened on June 12, 2014, and was reported in Russian-language outlets (here and here) and also by dailymail.co.uk in an article titled, "Awful moment Russian soldier is hit by a tank while on the parade ground (but somehow gets back on his feet)" on June 16, 2014. The video recently resurfaced with captions that imply or falsely state that these soldiers were part of the 2022 mobilization of Russian troops. One example is a Twitter post (archived here) published on October 13, 2022, with this caption:

🤦‍♂️ During a recent Russian parade (passing out ceremony 🤷🏼‍♂️), an armoured vehicle ran over a conscript. 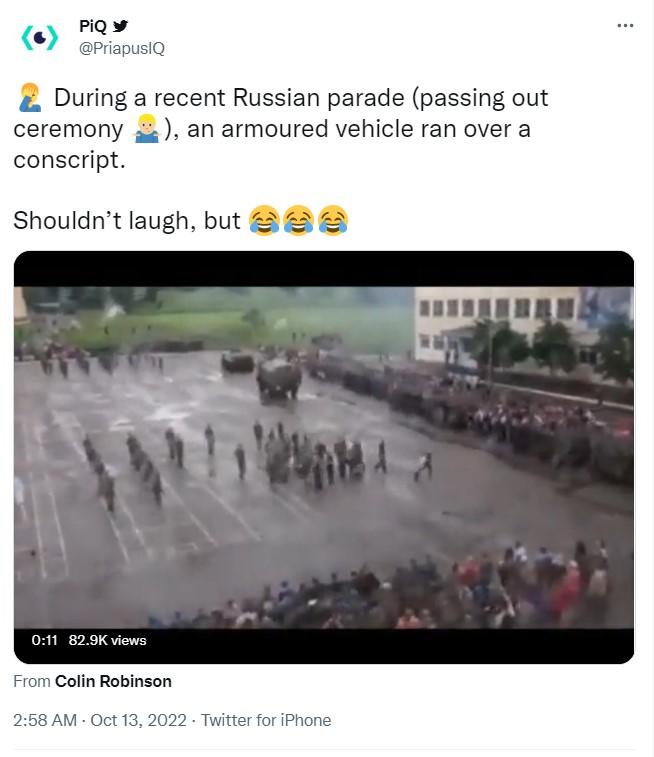 Lead Stories did uncover some inconsistencies in the 2014 reporting on the incident. Some reports said the soldier had no serious injuries after he was run over, and others said he was in serious condition. Dailymail.co.uk lists the name of the soldier as Pavel Touromov, sakhapress.ru identified him as Alexei Agishin, but a June 18, 2014, article by primamedia.ru features a photo of the injured soldier in a hospital bed, identified as Anatoly Agishin. Translated by Google, the article reports:

Conscript soldier Anatoly Agishin, who on June 12 was hit by a heavy armored personnel carrier on the day of taking the oath in Ussuriysk, believes that he was born in a shirt. Having fallen under the two front wheels of the armored personnel carrier, he managed to group and roll back under the body of the vehicle. Everything happened in front of the parents and the girl of the serviceman. The condition of the injured ordinary military doctors is assessed as satisfactory, reports corr. RIA PrimaMedia in Ussuriysk.

The Russian idiom, "Я родился в рубашке" (I was born in a shirt) refers to a very rare birth when a baby is delivered still inside the amniotic caul. It means a person was born very lucky. The phrase can also be used if a person has narrowly escaped death. The article quotes Agishin telling how he survived the incident:

I stood with my back to this armored personnel carrier. At the last moment, I turned around and a second later there was a blow. I don't remember how the front two wheels drove over me. But I remember that when I saw a gap between the wheels, I grouped up and crawled under the hull of the armored personnel carrier. I waited for him to pass and then only tried to get to my feet. But then I don't remember anything, - said the injured private of the 83rd brigade of the airborne troops of the Russian Federation Anatoly.

On March 31, 2015, a video showing another angle of the June 12, 2014, accident was posted on military.com after it surfaced. This video was filmed from the ground and shows Agishin's body rolling under the wheels of the armored personnel carrier.