Did good Samaritans bring a critically injured dog who had been hit by a vehicle to a veterinary clinic? And is there now an effort to try to find the owners of the injured dog so the owners know what happened to her and where she is? No, that's not true: Although this did happen in Alberta, Canada, on August 5, 2022, and a similar situation could happen somewhere else, the original text of the post from the veterinary clinic has been copied word for word and paired with images of several dogs. This dishonest post is another example of many that encourage concerned people to urgently share a post. This ruse is part of a spamming network -- after the post has been shared, the original narrative is edited and typically switched to a deceptive rent-to-own real estate ad.

The original post about the injured dog was posted on Facebook by Manning Veterinary Clinic in Alberta, Canada, on August 5, 2022. The young dog in the photo was black with brown markings. On August 22, 2022, a woman commented on the clinic's post stating that scammers were using the post in Nova Scotia. An example of a duplicate of the post, this time featuring a fluffy white dog, was posted in the group "Things For Sale In Doncaster," which has an audience in South Yorkshire, England. The post was published on October 23, 2022 with this caption:

This beautiful girl was picked up by good samaritans and brought to the clinic early this morning. She was hit by a vehicle, She is approx 6-9 months old. She's in critical condition but showing signs of recovery. We are doing everything we can for her at the moment share so that her owners can find out where she is. 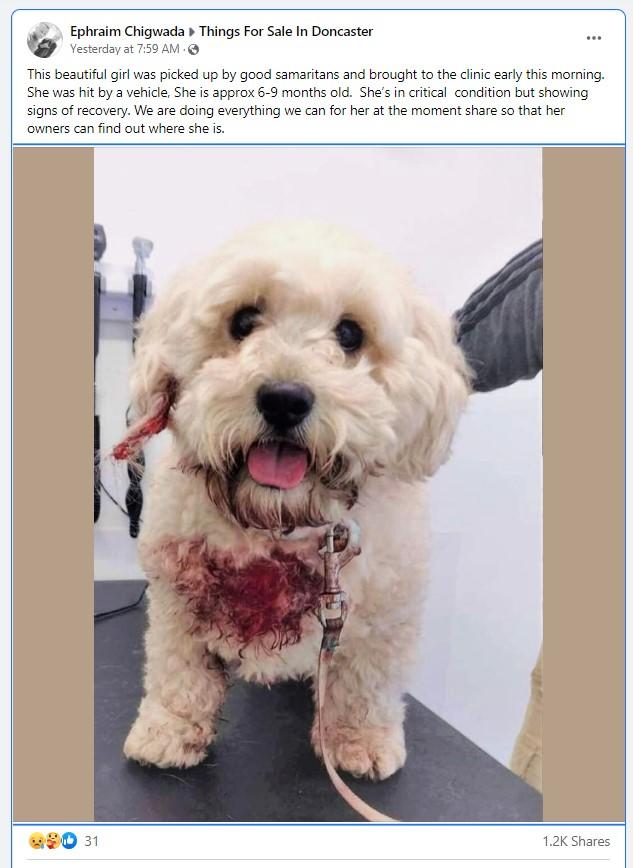 In the past Lead Stories has debunked several of the narratives that have been used by this spamming network. For this bait-and-switch spamming trick to work, it is not the plot of the story that is important. It could be a rattlesnake in a potted plant, thieves cutting catalytic converters, a noxious weed growing on the roadside, a dangerous man on the loose or a grandmother with dementia who is missing, for some examples.

What is important is that the story catches people off guard and inspires them to share the post. The posts are designed for sharing in a local community because when the post is eventually switched, the real estate ad will be targeted to that same community.

Below is a Lead Stories composite image illustrating how these posts are edited. At the time of writing, the dog post in the Doncaster group had not been turned into a real estate ad. In this mock-up, the Doncaster post is standing in the place of another just like it in that has already undergone the editing. A three dots menu (⋯) in the upper right hand corner of every Facebook post will offer the option to view the post's edit history (highlighted in blue). The edit history shows that originally the post had a caption about a critically injured dog but now is a rent-to-own real estate ad. 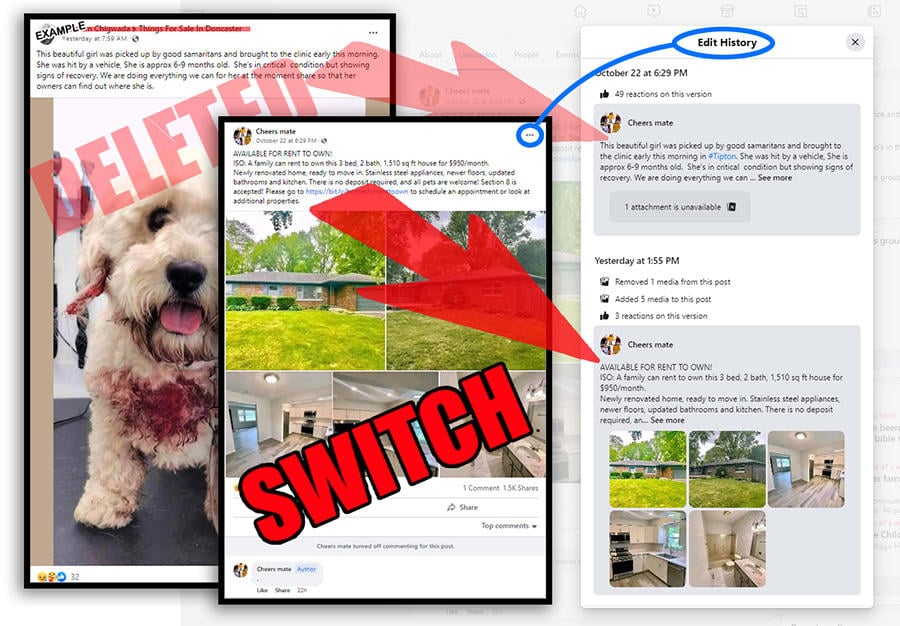 The home appearing in the exterior photos of the rent-to-own ad above is located in Brownsburg, Indiana, and is currently not for sale. A reverse image search for the photo brings up a blog article on projectsmallhouse.com titled, "WHY NOT RENT TO OWN?" The article outlines several of the common scams involving rent-to-own ads. The photo of this house is used to illustrate a deal that is "Too good to be true." The article warns:

All of the ads I have seen lately for Rent to Own are scams. It is not very hard to tell that they are scams. If you are on Facebook, just click on or search the name of the person who has listed the house. If that exact same house is supposedly in more than one location, it's a scam.

You could also search the words in the ad on Google in quotes and find the exact same ad listed on Craigslist and other places. Sometimes they have photos of different houses, but usually it is the exact same house each time.

The composite image below (will open larger in a new window) shows the original August 5, 2022, post from Manning Veterinary Clinic (center) and eight examples of deceptive copies of that caption coupled with photos of other dogs. 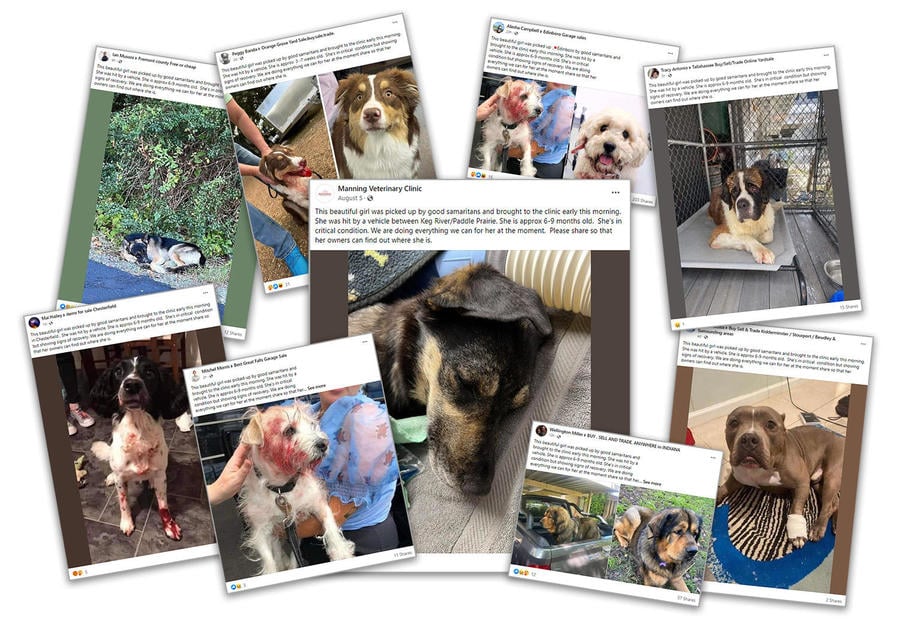