Was a U.S. submarine near the Nord Stream pipeline explosion? No, there's no evidence for such a claim. This claim was made on the Real Raw News website, which is known for publishing fabricated content. There are no serious media sources that make this claim.

The claim appeared in an article published by Real Raw News on October 18, 2022, titled "US Submarine Was Near Nord Stream Explosion" (archived here). It opened:

A US Los Angeles-class attack submarine was in the vicinity of the Nord Stream explosion on September 26 and may have had a role in crippling the underwater conduit that carries natural gas from Russia to Germany, according to a crewmember of the Navy P-8 Poseidon that overflew the damaged pipeline shortly after the explosion took place.

This is what the beginning of the article looked like at the time of writing: 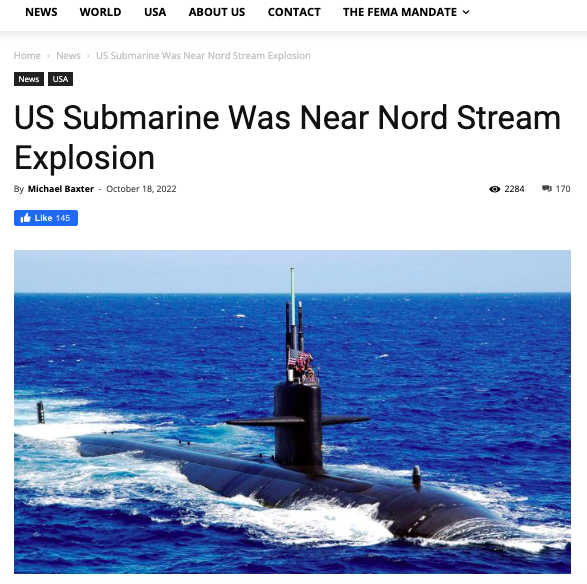 There is no reliable evidence offered in support of the claim, and no convincing details.

The Carnegie Endowment For International Peace published this analysis on September 30, 2022, of what happened in the Nord Stream Pipeline explosion. While the piece acknowledges some of what happened remains shrouded in mystery, there is no credible mention of a U.S. submarine nearby.

There are several websites republishing the Real Raw News article without labeling it as satire, making it likely an unsuspecting reader will not notice the site's disclaimer.