John Hoskyns-Abrahall with Bullfrog Films, the distributor of the movie in the United States and Canada, told Lead Stories that the picture is meant "[t]o challenge kids to see if they can disprove the absurd premise of the film."

The claim appeared in an Instagram post and video on October 23, 2022, under the title "More FE proof 🤷🏻‍♂️." It opened: 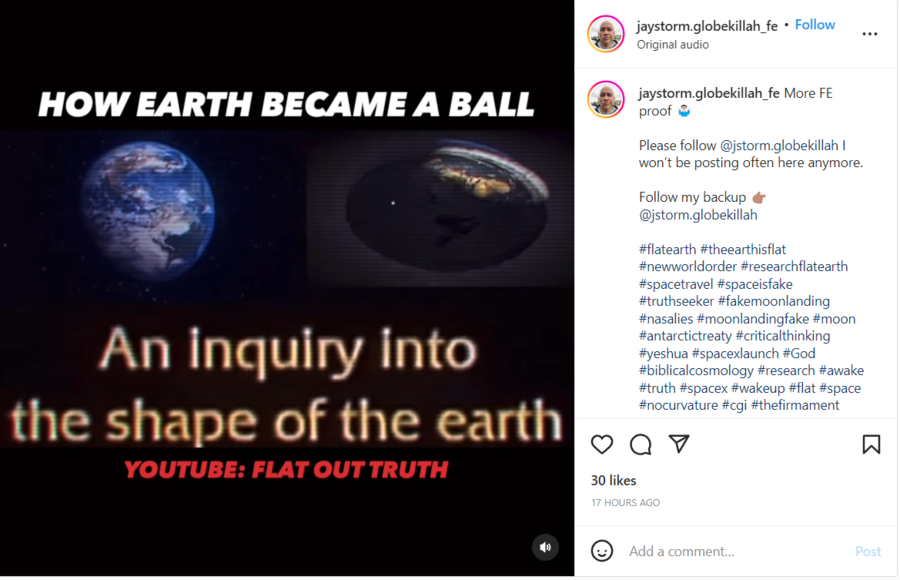 The video included in the Instagram post, "HOW EARTH BECAME A BALL," is not a documentary, but is made to look like one. Its creators took the original "In Search of the Edge" and rebranded it with a Flat Out Truth logo. Flat Out Truth is a collection of social media channels and blogs by Terry R Eicher that promote the flat Earth theory.

In an October 24, 2022, email to Lead Stories, Hoskyns-Abrahall said the original film was never meant to prove the Earth is flat and the new version is a "breach of copyright." He added, "I'm sure the Canadian filmmaker will be astounded that his film is still out there doing its job, and horrified that on top of everything else we seem to have lost our sense of humor."

The DVD version of the film comes with a study guide for classroom use. It includes a string of questions designed to make students think about what they're watching. Hoskyns-Abrahall said it gives us the most direct insight into what the movie's intent was. On page 4, it says:

The film is designed as an educational tool to help kids learn to think for themselves. As our senses are dulled by a daily barrage of media information, the tendency is to accept everything at face value. Since the news tells us something is so, it must be so, even though we all know, intellectually, that the news - and that extends to documentary programming - is someone's interpretation of the facts. But nevertheless, there it is on television, so we believe it, regardless of how the facts have been interpreted. By presenting a vigorous case to the viewer, supporting a theory that every school child knows to be false, in a 'scientific' and entertaining way, IN SEARCH OF THE EDGE challenges the viewer to stand up and say 'Wait a minute. That's baloney'.

There are different variations of the flat Earth theory, but the Live Science website says this is the most popular version of it:

The leading flat-earther theory holds that Earth is a disc with the Arctic Circle in the center and Antarctica, a 150-foot-tall (45 meters) wall of ice, around the rim. NASA employees, they say, guard this ice wall to prevent people from climbing over and falling off the disc.

Scientists have known for thousands of years that the Earth is round. The U.S. Library of Congress website says:

By the 5th century B.C., it was widely accepted that the Earth is a sphere. This is a critical point, as there is a widespread misconception that ancient peoples thought the Earth was flat. This was simply not the case.

In the 5th century B.C., Empedocles and Anaxagoras offered arguments for the spherical nature of the Earth. During a lunar eclipse, when the Earth is between the sun and the moon, they identified the shadow of the Earth on the moon. As the shadow moves across the moon it is clearly round. This would suggest that the Earth is a sphere. ...

And the Physics World website adds some historic background:

The notion of a flat Earth initially resurfaced in the 1800s as a backlash to scientific progress, especially among those who wished to return to biblical literalism. Perhaps the most famous proponent was the British writer Samuel Rowbotham (1816-1884).

This video by MinutePhysics explains some of the reasons why we know the Earth is round: