Can former President Donald Trump be reinstated by a Supreme Court decision in the case of Moore v. Harper? No, that's not true: Lead Stories asked legal experts about the claim and they said there's no chance that Trump could be reinstated as president because there's no constitutional mechanism for doing so. Also noted, the case has no bearing on the outcome of the 2020 election because it concerns a challenge to North Carolina's redistricting after 2020's election.

The claim appeared in a Rumble video (archived here) published by Christian Patriot News on October 5, 2022, titled "BREAKING! President Trump Could Be Reinstated Immediately By This Supreme Court Decision!" It opened: 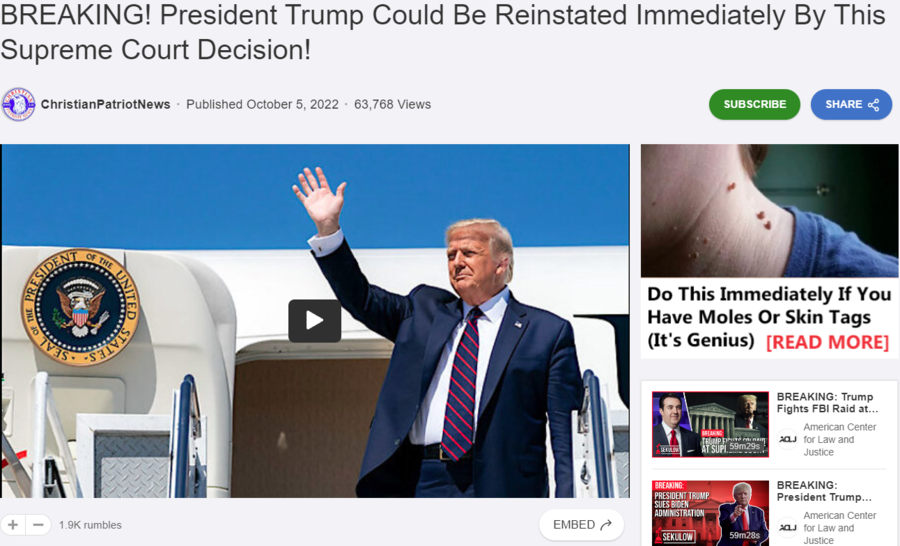 The video refers to the Supreme Court case Moore v. Harper, in which the Court will likely issue a decision before July 2023. It's an appeal of a North Carolina Supreme Court ruling and asks the question:

Whether a State's judicial branch may nullify the regulations governing the 'Manner of holding Elections for Senators and Representatives . . . prescribed . . . by the Legislature thereof,' U.S. CONST. art. I, § 4, cl. 1, and replace them with regulations of the state courts' own devising, based on vague state constitutional provisions purportedly vesting the state judiciary with power to prescribe whatever rules it deems appropriate to ensure a 'fair' or 'free' election.

The Brennan Center for Justice at New York University School of Law, a nonprofit law and public policy institute, says their argument hangs on "a debunked interpretation of the U.S. Constitution -- known as the 'independent state legislature theory' -- [which] renders the state courts and state constitution powerless in matters relating to federal elections."

The case is a conservative talking point and a screenshot of social media posts by Trump appears in the video: 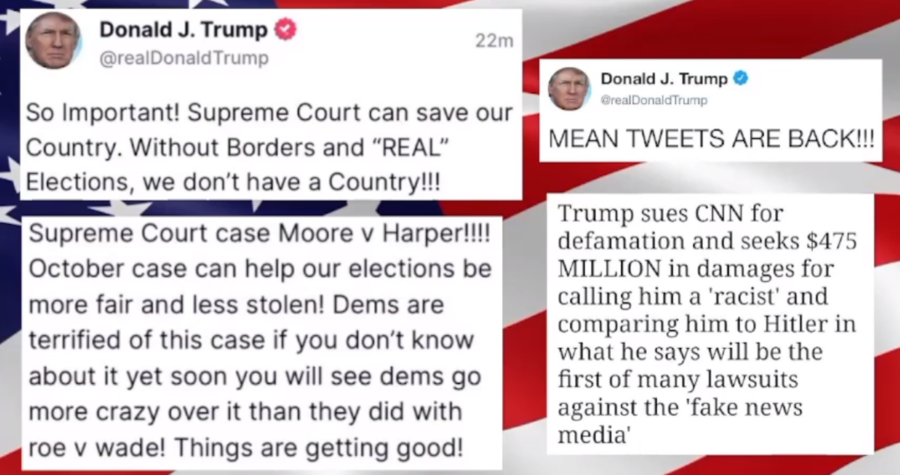 Redistricting, not the 2020 election

Stephen I. Vladeck, who holds the Charles Alan Wright Chair in Federal Courts at the University of Texas School of Law said the case could only affect future elections, not past elections.

There are various opinions as to how any decision in the case will shape redistricting going forward and how it might impact future elections, but Vladeck said he knows one thing for certain:

There is zero chance--not a small chance; zero chance--that any decision in the case will lead to former President Trump's reinstatement.

In an email to Lead Stories, Vladeck gave three reasons for his stance:

First, the specific case has nothing to do with the 2020 election; it's about North Carolina's redistricting after the 2020 census. Second, even if the Supreme Court sides with the challengers and holds that state supreme courts can't overrule their legislatures where federal elections are concerned, that ruling will not apply to prior rulings or elections. No party in the Supreme Court is arguing otherwise. And third, even if neither of those first two points were true, there isn't a single state in which the outcome of the 2020 election would've changed. In Pennsylvania, for example, Republicans conceded in the Supreme Court in early 2021 that their challenge to the state supreme court ruling allowing mail-in votes to be counted if they were received up to three days after Election Day would not have changed the outcome even if it had been successful--and that's just one of the four (or more) states in which the results would've had to change for Trump to have won.

With those three reasons, Vladeck returned to his bottom line at the end of his email response:

Trump lost. And nothing the Supreme Court does in Moore v. Harper is going to change that.

Rave concurs and provided his own three reasons as to why nothing could happen to the 2020 election retroactively:

First, and most importantly, there simply is no constitutional mechanism for "reinstating" or otherwise selecting a candidate for president after the House and Senate in joint session have counted the electoral votes ... and the new president has been sworn into office at the inauguration ... the process is final. Second, the application of the independent state legislature theory to presidential elections--and thus the validity of electoral votes under it--is not at issue in the Moore v. Harper case. And third, even if the Independent state legislature theory applied to presidential elections, the electors in 2020 were selected in the manner that the state legislatures directed--that is by popular vote in each state--on the date that Congress prescribed for choosing electors (i.e., the Tuesday after the first Monday in November). If the state legislatures were to change that after the fact by appointing different electors, that would violate the congressional statute setting Election Day and the voters' federal constitutional rights to due process and equal protection.