Were the Nazis and the Rockefellers responsible for changing the universal music standard for tuning A from 432 Hz to 440 Hz in 1953? No, that's not true: There are several falsehoods wrapped in this conspiracy about the establishment of this tuning standard, starting with the assertion that 432 Hz was the universal standard before a 440 Hz standard was adopted. It wasn't. There was no universally accepted pitch, and records show tuning across Europe has varied over time from 409 Hz to 457 Hz. (Hz is the designation for "hertz," a unit of frequency equal to one cycle per second. Thus 440 Hz would be 440 cycles per second. The Hz designation came later than the idea of a standard pitch, so the original references to pitch did not use Hz.)

There have been several efforts to standardize the tuning pitch going all the way back to 1834 when Johann Scheibler developed the tonometer, the first reliable measure for pitch, and advocated for a standard of 440 cycles per second at the Stuttgart Congress of Physicists where it was adopted -- this became known as the Stuttgart pitch. In 1917 the American Federation of Musicians adopted 440 Hz as the tuning standard for A. This has been reaffirmed several times by a variety of standards and professional organizations over the decades and yet orchestras and musicians may still diverge from this standard.

Conspiracies about the origin and harm of tuning A to a pitch of 440 Hz (or the benefits of tuning to 432 Hz) as well as videos debunking them have proliferated on YouTube for over a decade, many repeating claims which have been popularized by two people. A former dentist and "health products entrepreneur" Leonard G. Horowitz, who claims he prompted the 432 Hz music movement. Horowitz wrote a 2010 article titled, "MUSICAL CULT CONTROL: THE ROCKEFELLER FOUNDATION'S WAR ON CONSCIOUSNESS THROUGH THE IMPOSITION OF A=44OHZ STANDARD TUNING" (archived here). Decades earlier in 1986, the political activist Lyndon LaRouche and the Schiller Institute launched "The Verdi Initiative" which also campaigned to lower the tuning standard to 432 Hz. Both asserted the adoption of the 440 Hz tuning standard was led by Nazi minister of propaganda, Joseph Goebbels in 1939. This claim, with a different date, resurfaced in a video posted on Instagram where it was published by @herecomestroublexo on October 14, 2022. It was captioned:

Ever wonder why most modern music is hard to relax to?
Did you know the universal standard for tuning music was changed from the natural and harmonic 432 hz to unatural, discord causing 440 hz in 1953?
Wonder why this happened? Just ask the Nazis & the Rockefeller's!
#reels #reelsinstagram #livemusic #musician 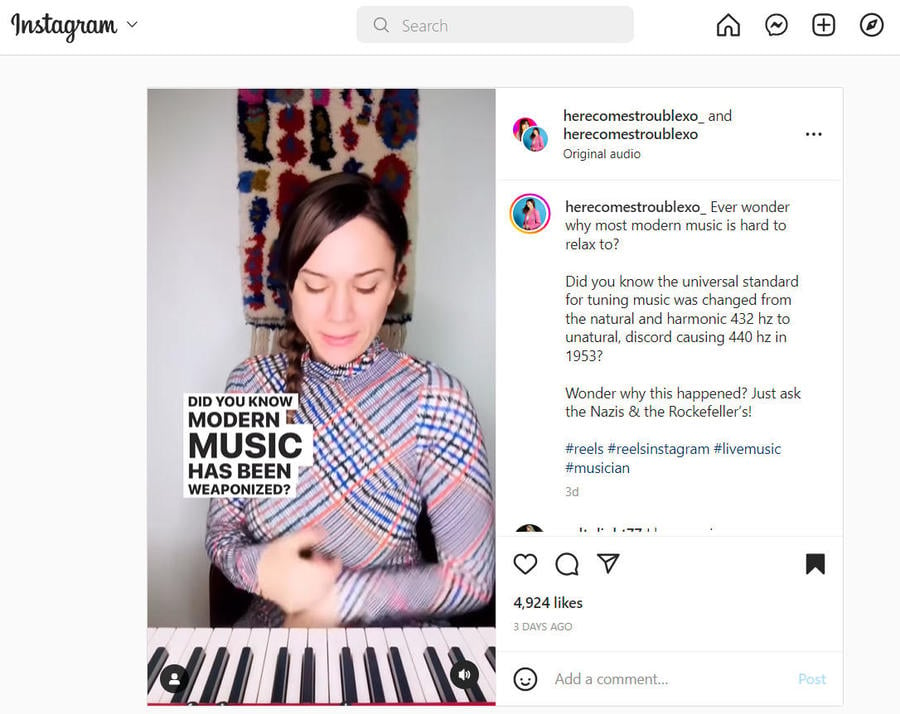 The transcript of the short video reads:

Did you know modern music has been weaponized?
God created this world with perfect mathematical equations like the Fibonacci sequence, and using 432 hertz for pure tuning. So why, in 1953 was it changed to 440 hertz? Well, because the Nazis and the Rockefellers pushed for it. The same people that created discord in modern medicine. Mozart and Giuseppe Verde used 432 Hertz for tuning because they knew it created peace and harmony in their music. If you build your tuning off 432 hertz all octaves result in a cross sum of nine, no other scale does this and to knock it off eight degrees to 440 creates disharmony and disease just like all the frequencies like WIFI, your cellphone, radio waves do, they know what they are doing. Creating discord on purpose.
So now you know how modern music has been weaponized.

There was no single standard for tuning which was changed from one pitch to another. The favored tuning pitch varied over time and region. In 1880 Alexander Ellis published findings (sample below) regarding the pitch of various tuning forks, pipe organs and major opera houses in use from 1640 - 1880. The article, "The History of Musical Pitch in Tuning the Pianoforte" offers a more legible chronological list derived from Ellis' records. Of the 85 pitch samples, not one measures exactly at 432 Hz. 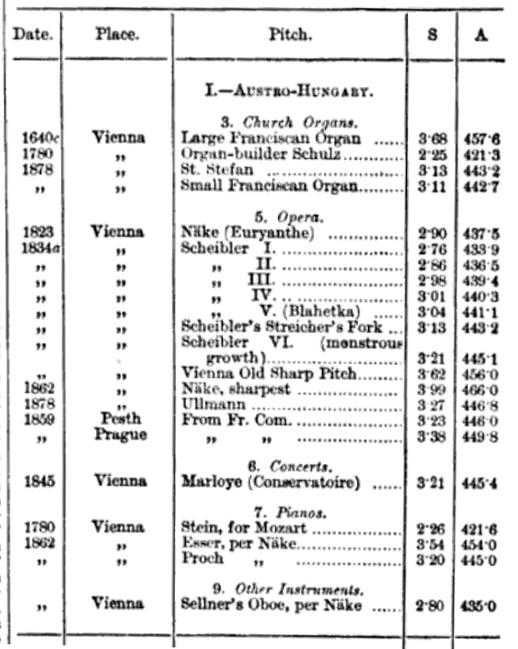 The video proposes that "Mozart and Giuseppe Verde used 432 Hertz for tuning because they knew it created peace and harmony in their music." But we know from Ellis that the 1780 tuning fork kept for Mozart by the piano builder Johann Andreas Stein, had the tone of A = 421.6 Hz. And Verdi had used other tunings, in the book "Verdi: Requiem" (page 17) David Rosen writes of the musical pitch (called diapason in French):

One of the most important issues - especially for vocal music - was the 'diapason'. At the time of the composition of the Requiem, Verdi insisted upon adopting a tuning where a1 = 435 Hz, the diapason normal adopted legally in France in 1859, and would later express a slight preference for 432 Hz - rather than today's cruel 440 Hz of higher.

The move to establish a standard, and what that standard would be, was driven by factors such as technological advances in measuring pitch, desire to protect the voices of singers, musical instrument manufacturing, the influence of orchestras and regional variations in climate. Over the years, the standard has continued to be considered and reaffirmed. Currently A = 440 Hz is specified by the International Organization for Standardization.

The conspiracy tropes involving purported sinister intentions of Nazis and Rockefellers in implementing the 440 Hz standard to create discord falls flat on two fronts. First, there is no evidence that tuning the A to 440 Hz is harmful to humanity or nature. And second, there is no evidence that the move to establish a standard, or that the standard be 440 Hz, was championed solely by the Rockefellers or Nazis.

In his long-form essay titled Musical Cult Control, Leonard G. Horowitz makes unfounded connections between Rockefeller Foundation grants and the American Federation of Musicians' adoption of the A = 440 Hz standard. There is no evidence that grants from the Rockefeller Foundation for music, the arts, or research were contingent on the AFM adopting the 440 standard in 1917.

Both Horowitz and the Schiller Institute's Verdi Initiative of Lyndon LaRouche make baseless claims that the Nazi propaganda minister Joseph Goebbels was responsible for organizing the international meeting held in London by the British Standards Institute; and that France and Italy were excluded from the meeting because they would have objected to the 440 standard preferred by the Nazis. There is no evidence of this. The table below shows the survey of the reports from different countries submitted to the 1939 Conference held in London, listing French and Italian proposals.

In two articles published in the journal "Nature," G.W.C. Kaye, the Chairman of the British National Committee on Acoustics reports on the London meetings of 1938 and 1939. Kaye served as chair of the meetings which he describes in upbeat and agreeable terms. The meetings were held under the auspices of the British Standards Institution (a member of the International Standards Association) and were held in the BBC's "Broadcasting House."

The final paragraph of the 1938 summary gives notice of plans for an international conference in 1939 and extends an invitation to "those readers of NATURE who are interested in the general situation" to communicate with the director of the British Standards Institution. Additional notes from the meetings containing a detailed list of the delegates in attendance, are part of the Vern Oliver Knudsen papers (Coll. No. 1153, Box 25, Folder 4) held in Special Collections at the UCLA Library. There were five French delegates, three from Italy, one from Holland, nine from Great Britain and three from Germany -- none of the German delegates were named Goebbels. There were also delegates from The International Union for Broadcasting (U.I.R.), and the International Consultative Committee on Telephony (C.C.I.F.).