Is it true that Google translates the Ukrainian president's last name to English as "evil rules the world"? No, that's not true: Lead Stories replicated what social media users suggested others do to get this result but found no confirmation.

🇺🇦 This is creepy ....
Take Google translate and enter Zelensky but add a space before the "n".
Zelen sky
Result : EVIL

If you add Volodomyr with a space before the "m".
Zelen sky Volodo myr
Result : EVIL RULE THE WORLD 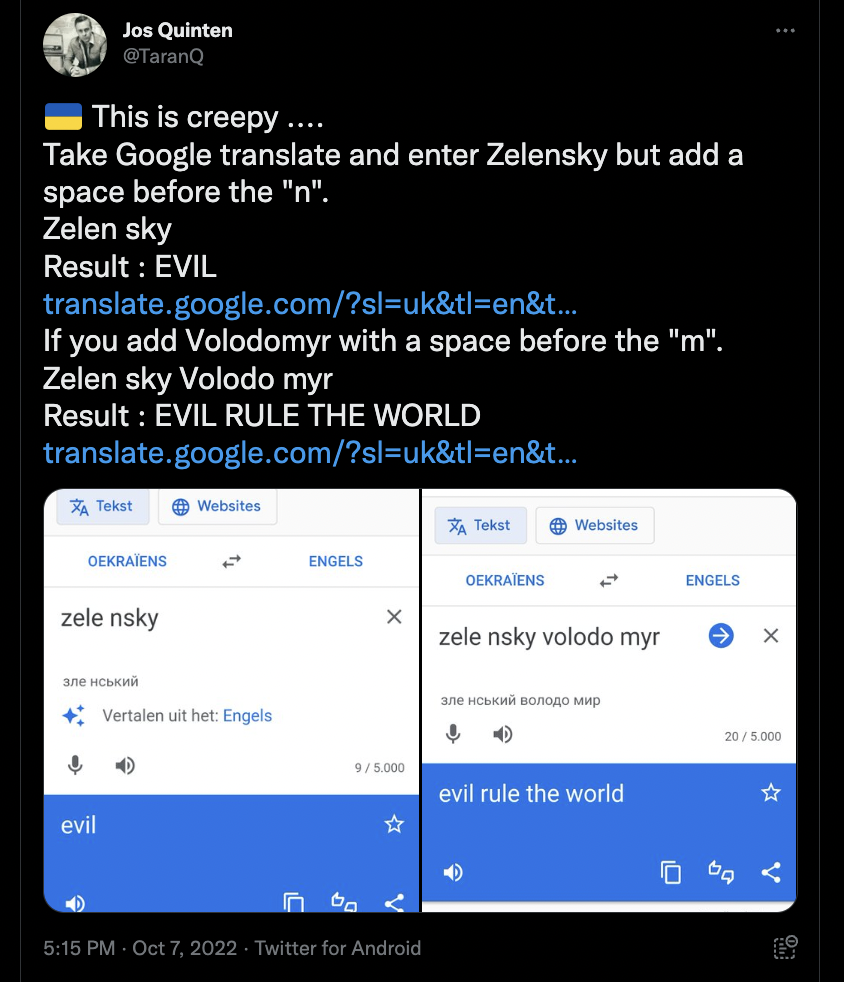 The tweet shared two links that supposedly backed up the findings. Lead Stories followed the links but did not see the same results:

A closer look at the screenshots shared in the tweet shows some automatically appearing language ("vertalen uit het") identified by Google as Dutch. This means that the supposed attempt to translate Zelenskyy's name was either made from the Netherlands or by a Dutch-speaking user utilizing a localized version of the service, the translate.google.nl page.

Lead Stories changed the language and region settings to be able to see the same results as a person from the Netherlands would. However, this strategy also did not lead to the results the Twitter user claimed to have seen: 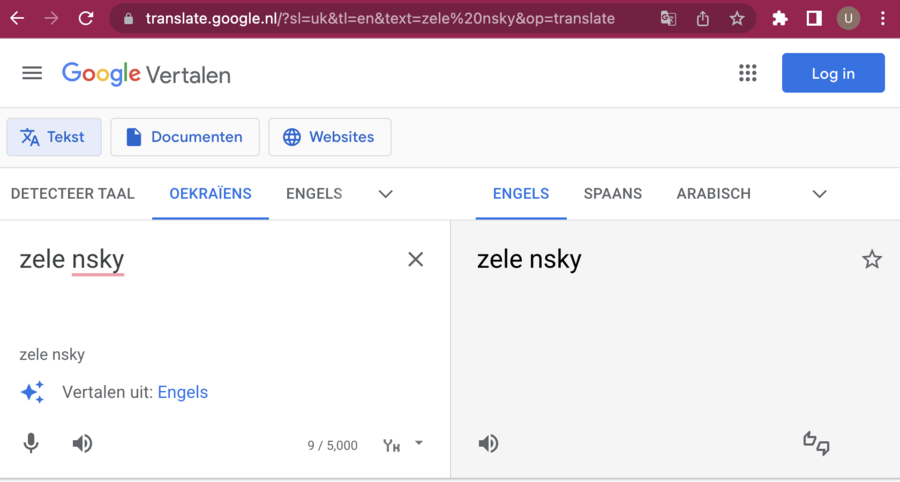 In the process, Lead Stories encountered one irrelevant translation suggestion, which appears to have occurred due to the incorrect use of spaces proposed in the tweet. Breaking apart syllables can impose other meanings.

For example, the word "mat" does not mean the same as when it is part of the word "mathematics." The same is true in other languages.

However, this incorrect translation was not even close to what the social media claimed:

Automatic translation is capable of delivering a core meaning of a word or even a sentence but, as the 2018 Atlantic article pointed out, it may omit the crucial nuances when it comes to more complex phrases referencing a cultural context or figurative language.

Zelenskyy or Zelensky (also spelled as Zelengskyy) is a last name found in Ukraine, Belarus, Poland and Russia. While there is no publicly available information about its roots in the case of the current Ukrainian president's family, the phonetic association implies a connection with the color green.

Slavic proverbs sometimes use this color as a reference to youth or spring. One Soviet-era dictionary says the last name Zelensky derives from a particular geographic locality with the word green in its root.

As for the first name shared by the Russian and Ukrainian presidents, Volodimir or Volodymyr (not VolodOmyr as spelled in the tweet), one of the most common interpretations of its meaning in Slavic languages is "to rule the world." However, researchers still don't appear to have reached a consensus on its origins, etymology and meaning, citing possible German roots and how the meaning of the name's components have changed over time.