Does a photo show a man beaten up for "child trafficking" in 2022? No, that is misleading: The image is of a man who was arrested in South Africa in 2019 under suspicion of attempted kidnapping. There was no evidence that his plan was to traffick a victim. The post was shared without reference to where or when the incident actually took place. A fact check about the claim published in 2020 noted the generic "child trafficking" warning is misleading and that many of the claims in the text of the post regarding the man's arrest were false.

CHILD TRAFFICKING ALERT! READ
Man in Goodwood chased after a girl as she left school! She got home, screamed and told her mother. Guys then chased the guy and beat him up. 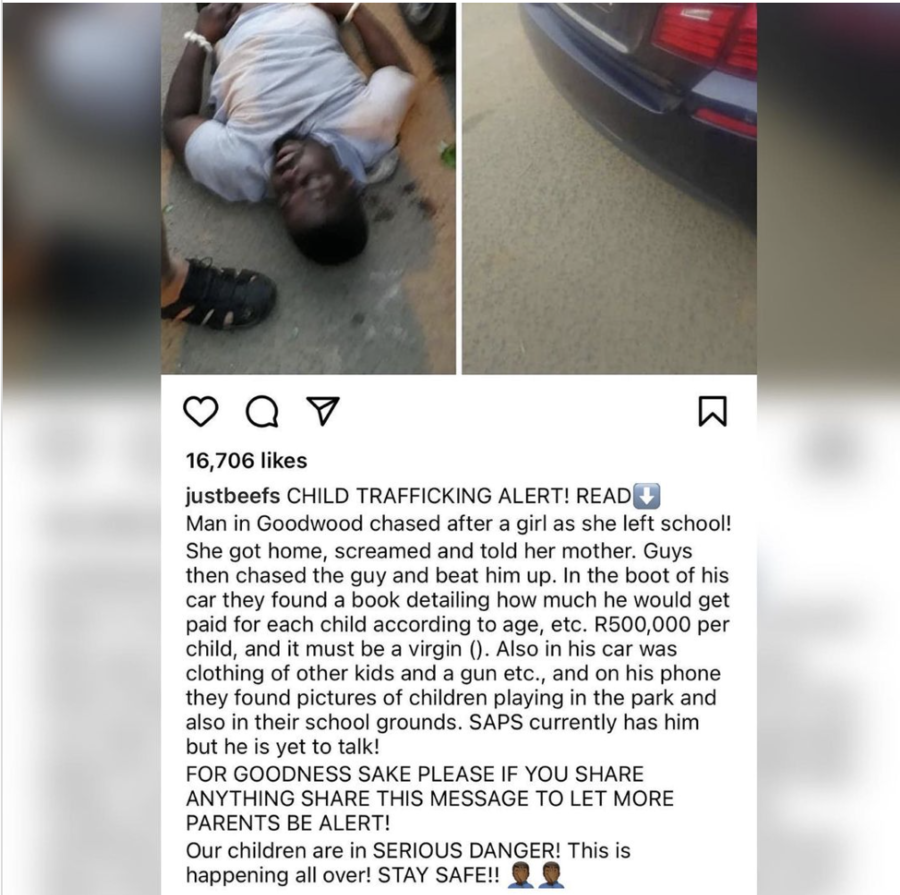 There is no evidence that the man in the picture was involved in child trafficking. A reverse image search of the photo shows that the picture was on the front page of the Zululand Observer newspaper on August 5, 2019, in an article titled, "Bay kidnapping scare." The man's arrest came after he "attempted to lure two women and a 16-year-old girl into his vehicle." Zululand is a region in South Africa. The man was arrested in South Africa for attempted kidnapping but there was no proof that he planned to traffick his victims after they were taken against their will.

There is something in the caption that points to the details about the man being in South Africa, not in the U.S. The post mentions the amount of money is "R500,000," which is the way to reference the South African rand.

An AFP Fact Check published in October 2020 identified the man in the photo as having been arrested in Richards Bay, not Goodwood, which is 870 miles away from Goodwood in South Africa. The fact check details several inaccuracies in the post, which claimed, "In the boot of his car they found a book detailing how much he would get paid for each child according to age, etc. R500,000 per child, and it must be a virgin." The AFP Fact Check noted that a police spokeswoman said the book:

had names; he is a loan shark so those were the names of people owing him money.

The gun found in the car was a toy gun and there were no children's clothes in the car.

The Polaris Project website offers details about human trafficking myths here. While the issue of child sex trafficking is complex, in the United States the National Center for Missing and Exploited Children shares information regarding the cases:

While any child can be targeted by a trafficker, research, data and survivor lived experience and expertise have revealed traffickers and buyers often target youth who lack strong support networks, have experienced violence in the past, are experiencing homelessness, or are marginalized by society. Traffickers are masters of manipulation and prey upon vulnerabilities using psychological pressure and intimidation to control and sexually exploit the child for their benefit.