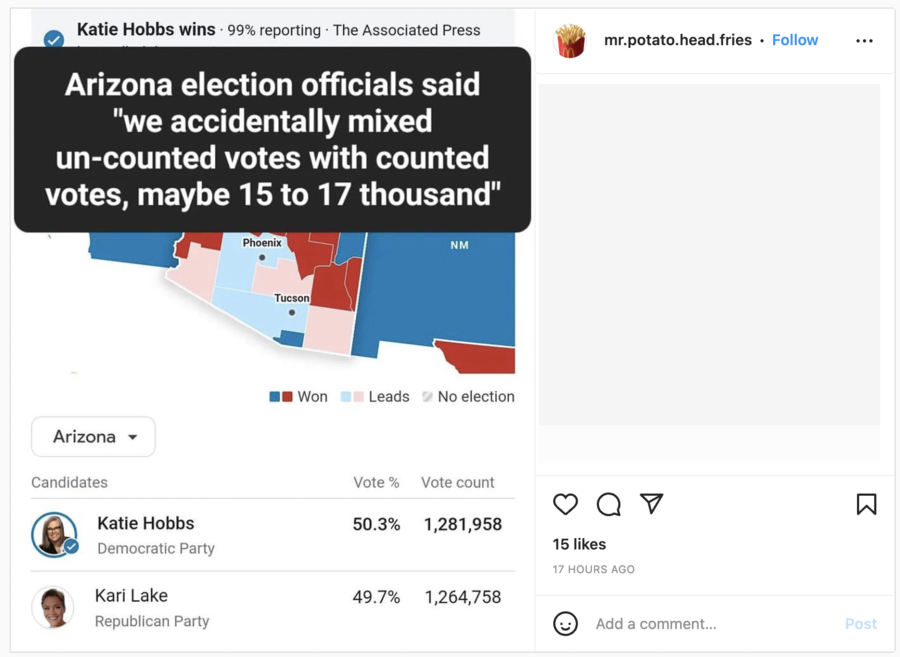 "It is not true. Maricopa County officials never said that," Megan Gilbertson told Lead Stories via email on November 18, 2022. An internet search yielded no results of news organizations reporting that Arizona election officials said they mixed up 15 to 17 thousand ballots.

Blake Masters, the Republican candidate who lost the U.S. Senate race to Mark Kelly in Arizona, made a similar accusation about mixed-up ballots in Maricopa County on November 11, 2022, on Fox News' Tucker Carlson show. At 6:09 in the YouTube video of the show, Masters claims:

It got worse. So, people when they got to a machine and the machine didn't work they were invited to just drop their ballot in a secure box. Hey, we'll count this later. Well it turns out Maricopa County on at least two occasions mixed up those uncounted ballots with ballots that had already been counted so it's a giant disaster. It's a giant mess to try to un-mix these ballots.

He then said Maricopa County should "wipe the slate clean and just take all the ballots and do a fresh count."

At two Vote Centers, poll workers combined the ballots which ran through the tabulator with ballots deposited in secure door number 3. This has happened in the past, and we have redundancies in place that help us ensure each legal ballot is only counted once.

Because ballots are tabulated by batch, we are able to isolate the results from those specific locations and reconcile the total ballots against check-ins to ensure it matches. This is done with political party observers present and is a practice that has been in place for decades.

There is no legal process in place to stop counting and start over. At Maricopa County, we follow the laws as they are written.