Did CNN report that Donald Trump died of autoerotic asphyxiation? No, that's not true: "It's a fabricated image and not anything CNN reported," a CNN spokesperson told Lead Stories. The post appears to be a joke since former President Donald Trump is alive, as of this writing. He took part in a live national radio show on November 3, 2022.

The claim about Trump's death appeared in a post on Instagram on November 2, 2022. The posted image resembles a screenshot of an article attributed to CNN. The alleged article's headline reads: 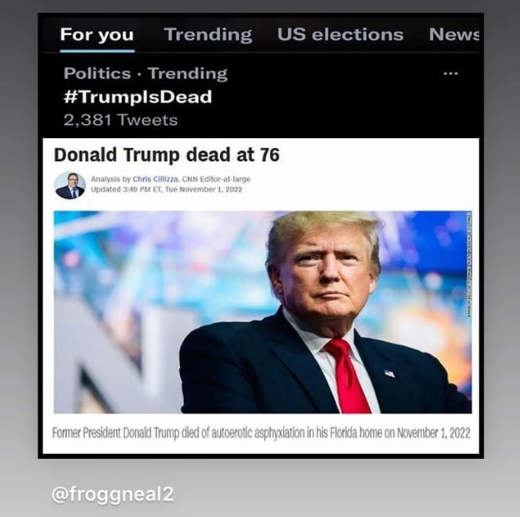 The caption on the post reads, "Former President Donald Trump died of autoerotic asphyxiation in his Florida home on November 1, 2022."

CNN spokesperson Emily Kuhn told Lead Stories via email on November 3, 2022, that the network did not publish a story that Trump died from autoerotic asphyxiation and that the image was not real.

The image in the post appears to be an altered version of a CNN story (archived here) that was posted on November 2, 2022. The real headline was "Donald Trump joins the Paul Pelosi conspiracy caucus." Here is a screenshot of the real article:

Trump did a live phone interview on the Real America's Voice radio show "American Sunrise" on November 3, 2022. Here is a clip from his interview:

KCCI Des Moines Channel 8 news reported that Trump was scheduled to appear at a rally in Sioux City, Iowa on November 3, 2022, at 7 p.m. CDT.