Is the U.S. covered with the sites of ancient pyramids associated with a pre-Columbian African civilization known as the Moors? No, that's not true: Hundreds of ancient earthworks and mounds scattered throughout North America have been linked to the continent's earliest inhabitants. However, these archaeological sites were built by Native Americans who migrated to North America from Asia approximately 15,000 years ago, experts confirmed for Lead Stories. The first descendants from Africa were enslaved persons transported during the West Africa slave trade in the 16th century.

The claim about African "pyramids" emerged in a nearly four-minute video posted to TikTok (no longer available) that was reshared on Instagram on October 31, 2022. A graphic on the video reads:

Showing y'all where Black Culture live in US, And how they destroy the history and remake it

The video's narrator describes "pyramids" in the U.S. that he alleges represent the historical population centers of Black Americans. These areas, he says, provide evidence that individuals from Africa were the first groups to inhabit North America.

Here is the claim as it appeared at the time of this fact check's publication: 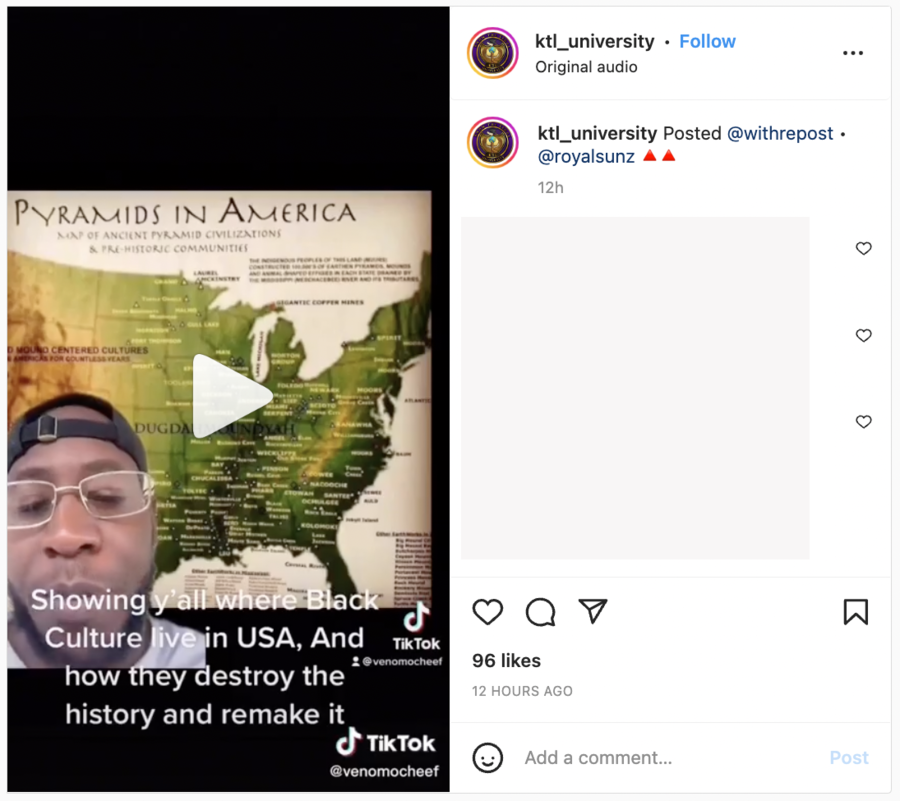 Prominent archaeological and anthropological theories hold that the original inhabitants of North America migrated from Asia approximately 15,000 years ago or possibly sooner. This directly contradicts the video's claim that the continent's first settlers originated directly from Africa.

Lead Stories reached out to experts.

"The claim that ancient peoples of the eastern United States came here from Africa is an old and incorrect interpretation," John Hoopes, an anthropologist and professor at the University of Kansas, said in an email sent to Lead Stories on November 2, 2022.

"In my opinion, the claims about Moors (or 'Muurs') are the result of a combination of: 1) wishful thinking that disregards science, and 2) conspiracy theory that claims scientists are intentionally concealing the truth. Sadly, these narratives also show a wanton disregard for the heritage of the descendant Native communities of the Americas."

This claim is rooted in a movement known as the Empire Washitaw de Dugdahmoundyah. Its followers claim, without corroborating evidence, that the original indigenous inhabitants of North America were Black Africans. This unfounded theory is sometimes used to argue that Black Americans are the rightful owners of U.S. lands ceded during the 1803 Louisiana Purchase.

"There isn't any evidence for migration [to North America] directly from the African continent," Ben Thomas, director of programs at the Archaeological Institute of America, told Lead Stories in an email sent on November 2, 2022.

'Pyramids' featured in the map are Native American archaeological sites

The video narrator spoke against the backdrop of a map (found here, here and here) that contains a description that reads:

The indigenous peoples of this land (muurs) constructed hundreds of thousands of earthen pyramids, mounds and animal-shaped effigies in each state drained by the Mississippi (Meschacebe) River and its tributaries.

The map itself is based on a Google map that depicts the locations of over 340 authentic Native American mounds, earthworks and archaeological sites, the oldest of which is considered to be the 5,400-year-old Watson Brake, according to the journal Archaeology.

The Library of Congress states that free and enslaved Africans came to North America with Spanish explorers in the early 15th century, but were not living in Spanish Florida until the late 16th century.

Though there is some disagreement surrounding the exact dates of human migration to North America by a few thousand years, scientists generally agree that Native American ancestors first descended from Asia approximately 13,000 to 15,000 years ago.

"There are multiple theories about the peopling of the Americas and consensus is hard to find. The main theories include a terrestrial route -- Beringia [an] ice-free corridor around 13,000-15,000 years ago -- and a Pacific coastal route that is generally considered to be earlier than the terrestrial one," Thomas told Lead Stories.

"All that being said, there is agreement on one thing - the first people that came to the Americas [were] derived from Asian populations."