The claim appeared a tweet (archived here) published on November 7, 2022. It said:

Update from Brazilian leaders: Military audit of the election will now be released Wednesday. Dozens of boxes had zero Bolsonaro votes. Evidence will be presented of fraud. The nation is on the brink of social collapse unless the military has a strong presence. 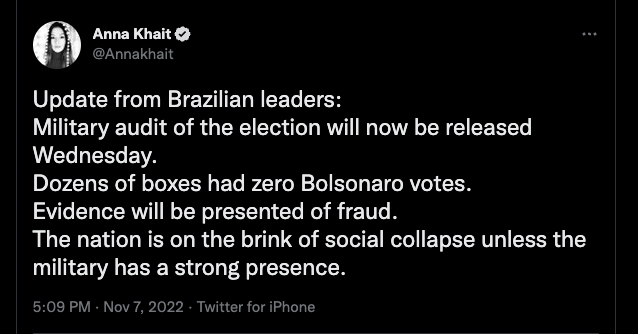 However, Brazil doesn't use boxes to count votes: Since 1996, the country has been voting electronically, with no paper ballots involved.

Here is how BBC described the process in October 2022:

Each candidate has a number, and on election day voters type the number of their chosen candidate into a voting machine at polling stations across the country.

The votes are then counted by the machines, and the totals are sent electronically to a central office. Votes from across the country are tallied up and a final result is announced, usually within hours of polls closing.

Each machine also prints out a paper copy of the totals for each candidate. When polls close they are displayed publicly at polling sites, and each machine's votes can be compared with the total recorded by the electoral court.

This year, for the first time, these paper copies were published online on the day of the first round vote.

In the 1994 national elections, for example, vote tabulation required about 170,000 people. Because of the scale of the task, vote counting could take weeks, and the post-election period was a time of great uncertainty and tension.

Most importantly, the lengthy tabulation period increased the opportunity for vote counters allied with candidates to manipulate the vote count. While representatives of political parties could observe the vote count, the lengthy vote count period made it difficult for partisan and other civil society actors to fully monitor the process. The most common type of fraud was manipulation of the tabulation sheets, where vote counters who were allied with candidates would subtract votes from some candidates' tallies and add them to their favored candidates' counts.

Although no electoral fraud was uncovered in Brazil during a quarter-of-a-century-long practice of electronic voting, the outgoing president, Jair Bolsonaro, insisted that the returns could not be trusted because of the absence of paper ballots. In October 2022, he lost his reelection. While his supporters continued to advocate for military involvement on social media and already-debunked rumors about purported martial law circulated on social media, Bolsonaro reluctantly agreed to proceed with a transfer of power in early November 2022.

The tweet in question presented a variation of an earlier claim about the purported "military audit" originating from an article published on November 1, 2022, by Gateway Pundit -- a resource that had been previously sanctioned by Twitter, Facebook and Google for spreading misinformation about U.S. politics and COVID.

In the fall of 2022, NPR reported that the content of English-language misinformation about the 2022 presidential election in Brazil mirrored the rumors about electoral fraud spread domestically in the United States and tended to be amplified by the same resources.