Did the U.S. Air Force say, on the record, that the military branch wants to control the weather by 2025? No, that's not true: The Air Force public affairs team told Lead Stories that it is not Air Force policy to control the weather by 2025. The claim apparently traces back to a 1996 Air University research paper titled, "Weather as a Force Multiplier: Owning the Weather in 2025." A disclaimer in the research paper -- more than two decades old at the time of this writing -- says it contains "fictional representations of future situations/scenarios" and that the views expressed in the paper do not reflect the official policy or position of the Air Force.

The claim appeared in a TikTok video reposted on Instagram on November 16, 2022, with the caption, "The air force is on record as saying, 'they want to control the weather by 2025.' #control #weathermodification #geoengineering #climatecontrol #weather #sky #conspiracy #tiktok #takethegoldpill #tookthegoldpill Please consider following our main account @takethegoldpill Credit: @ porkypine121 on tiktok." The video opened with a woman saying:

The Air Force is on record as saying, quote, they want to control the weather by 2025, and we are not talking about just seeding clouds for rain. 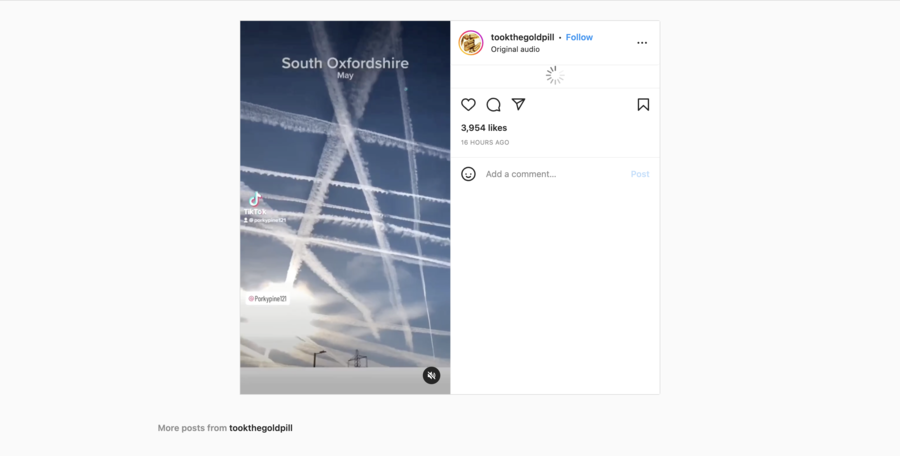 The video shows contrails in the sky with overlaying text that reads, "South Oxfordshire May." The audio can be found in a YouTube video posted by the Massachusetts School of Law in 2010. Ilya Sandra Perlingieri, the speaker in the video, was a former art historian, herbalist and sewing instructor. In the Instagram clip of her remarks, Perlingieri did not attribute her claim to anyone. There are no sources for any of the claims she makes in the YouTube version, which is 5 minutes 23 seconds, either.

Lead Stories reached out to the Air Force regarding the claim. In a November 17, 2022, email, Public Affairs Specialist Sarah Fiocco at the Department of the Air Force said:

This was a research paper written by an 1996 Air University student and is not reflective of Department of the Air Force policy. Please see the student's disclaimer located below and on page ii of the link.

The second page of the report reads in part, "The views expressed in this report are those of the authors and do not reflect the official policy or position of the United States Air Force, Department of Defense, or the United States government. This report contains fictional representations of future situations/scenarios. Any similarities to real people or events, other than those specifically cited, are unintentional and are for purposes of illustration only."

The Environmental Protection Agency (EPA) website has a PDF file on its website titled, "Contrails Facts." Contrails are a "streamer of cloud sometimes observed behind an airplane flying in clear cold humid air." Contrails are often called "chemtrails" and have become the subject of various unproven conspiracy theories.

On page 11 of a 14-page PDF file, the EPA has a section labeled "The 'Chemtrail' Hoax." The EPA writes that authors of the chemtrail conspiracy often cite the 1996 Air University research paper as proof that the U.S. Air Force is conducting experiments on the weather.

Lead Stories has written several fact checks surrounding the topic of "chemtrails." You can find those stories here.