Did the U.S. Navy Judge Advocate General's [JAG] Corps and the Office of Military Commissions find Moderna CEO Stéphane Bancel guilty of crimes against humanity because the Moderna COVID-19 vaccine killed 32 service members? No, that's not true: A spokesperson for the U.S. Navy categorically rejected the claim. The allegation comes from a website that identifies itself as a satirical website and routinely publishes false claims. The claim about Bancel's alleged trial is the continuation of another false claim about Bancel, made by the same website, that Lead Stories debunked on November 9, 2022.

The U.S. Navy Judge Advocate General's Corps and Office of Military Commissions had difficulty finding three impartial panelists to hear evidence against Moderna CEO Stéphane Bancel, for every interviewee knew someone whose life the vaccine had shattered--or killed.

This is what the article looked like online at the time of this fact check's writing: 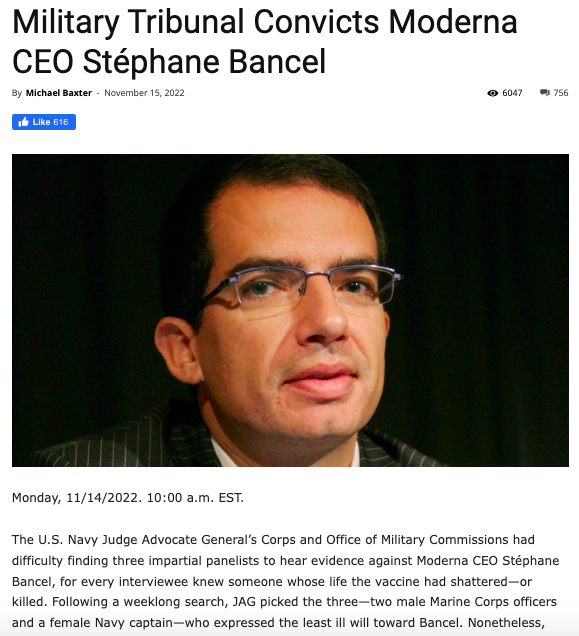 The claim also says that "Bancel is scheduled to hang on November 18, at GITMO," a reference to the military prison located within the Naval Station Guantanamo Bay at the southeastern end of Cuba.

The statements are false. They are untrue

Lead Stories emailed Moderna for comment about this story's claim. We will update this post accordingly if we receive a response.