Were there zero influenza cases worldwide in 2021 because flu cases were fraudulently recorded as COVID-19 cases? No, that's not true: Since the onset of the coronavirus pandemic in March 2020, flu cases have been categorized separately from COVID by national and international surveillance programs. Global flu cases significantly decreased during the 2020-2021 flu season -- in large part due to COVID mitigation measures and record-high flu vaccine administration. However, the Centers for Disease Control and Prevention (CDC) and the World Health Organization (WHO) both reported that there were flu cases in the U.S. and around the world. And while COVID and influenza are both respiratory ailments, they are caused by different viruses, requiring different tests that produce separate results.

The claim originated in a video shared on Instagram on December 6, 2022, in which English media personality Katie Hopkins implied that 2021 flu cases were fraudulently recorded as COVID, stating that there were no flu cases that year "at all on the whole planet."

In the video, Hopkins said:

Would you [believe] it? In the U.S.A., already there are record-high cases of flu. That's right, flu. And last year [2021], there were none at all on the whole planet. I mean, if you believe those nutter conspiracy theories, it's almost as if flu was counted as COVID last year, and then now, suddenly, it's back again.

Below is a screenshot of the post as it appeared at the time of the writing of this fact check: 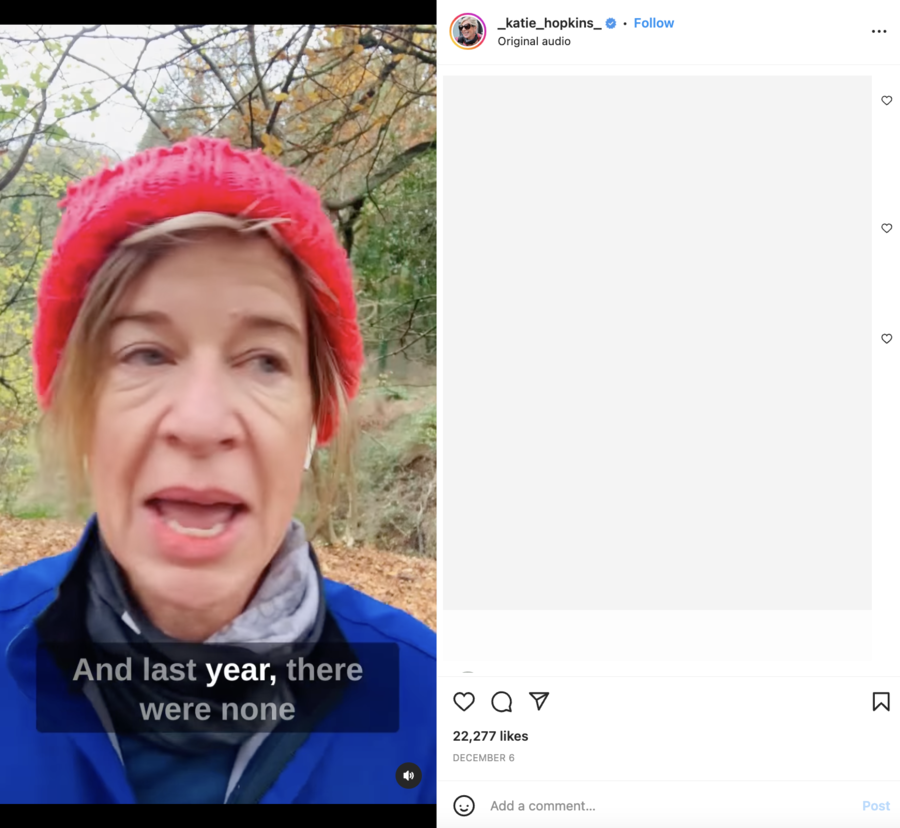 Flu cases were not miscategorized as COVID

Hopkins did not cite any official sources, records or data to substantiate the claim.

As Lead Stories reported in November 2022, COVID and flu cases have been recorded separately by health monitoring agencies since officials began collating and publicly publishing COVID data after the declaration of the pandemic in March 2020. In the U.S., this is done through the CDC COVID Data Tracker and the CDC Fluview, both of which include weekly data and updates. The World Health Organization (WHO) tracks global cases through FluNet, a global web-based tool for flu virological surveillance.

While COVID and influenza are both respiratory ailments, they are caused by different viruses and require different tests. Lead Stories has written about the differences in the diseases and tests.

Flu cases in the U.S.

Flu season in the U.S. occurs between fall and winter, and typically peaks from December to February. Though flu cases occur throughout the year, the CDC generally considers cases between September and the following May to be flu season. The CDC provides estimates of flu cases, but cannot state the exact number of people infected by the flu. It provides several reasons for this, including:

Flu cases at the height of the pandemic were, in fact, unusually low in 2021. This is partly the result of COVID mitigation measures like social distancing and mask-wearing, as well as the administration of a record number of flu vaccines. This "minimal influenza activity" means that population-wide estimates for the 2020-2021 flu season in the U.S. are not available.

Every year, CDC usually generates estimates of the number of illnesses, medical visits, hospitalizations and deaths that happen during a flu season--these estimates are used to collectively describe the annual burden of flu. To produce these estimates, CDC uses a mathematical model that is based in part on the number of people that are hospitalized with flu in our hospitalization surveillance network, FluSurv-NET. During the 2020-2021 season, however; the number of people hospitalized with flu was too low to generate stable burden estimates as is done for a typical flu season.

We do know that flu activity [in 2021] was the lowest it has been since current reporting began in 1997. We also know that flu illnesses, hospitalizations and deaths were very low last season, probably well below the estimates for the 2011/2012 season, which was the mildest flu season in the decade between 2010 and 2020.

To compare the 2020-2021 flu season to previous years, the CDC instead turned to the "cumulative number (or percent of specimens testing positive) of clinical lab-confirmed flu infections for Week 34 from the past two flu seasons." The health agency reported that 1,899 (0.2%) of 1,081,671 clinical samples had tested positive for an influenza virus, or about 216,334 confirmed positive cases. Since this number only includes people tested in a clinical setting, it is likely there were more cases in the general population that had not been diagnosed and, thus, not recorded.

By comparison, during the 2021-2022 flu season, the CDC estimated there were 9 million flu illnesses, 4 million flu-related medical visits, and 100,000 flu-related hospitalizations. Past flu season metrics can be viewed here at the CDC website.

Since the timing of the flu season varies around the world, WHO compiles its data differently than the CDC. The international organization tracks virological influenza metrics using FluNet over the course of a year. As is shown in the graphic below, total reported flu cases in 2021 were also relatively low for most of the year around the world, with the exception of a global peak in November and December. 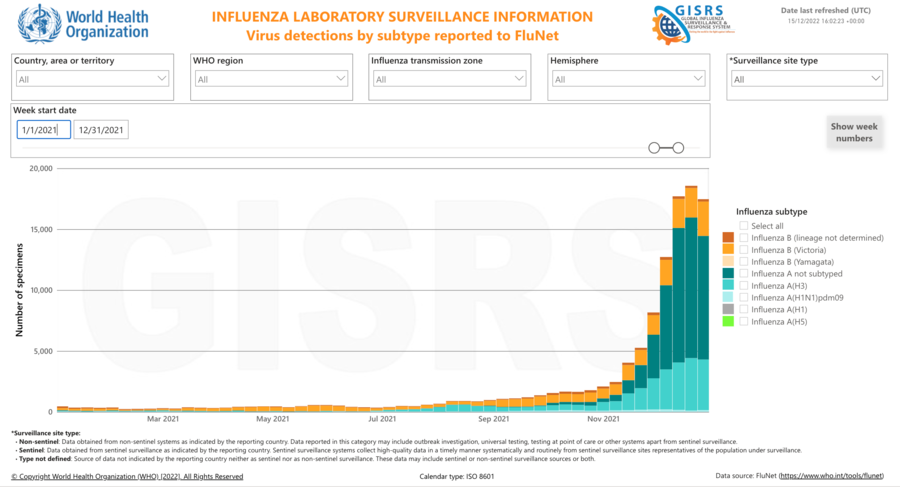 As of December 3, 2022, the date of the most recent data available, seasonal flu activity remains high across the U.S. As of this writing, the CDC has estimated that 13-27 million "flu illnesses" occurred between October 1, 2022 and December 3, 2022.

Previous Lead Stories fact checks of claims about the flu can be found here.