Did former White House Covid-19 coordinator Jeff Zients die at Guantanamo Bay's Camp Delta in Cuba on December 21, 2022, after being arrested by the U.S. military? No, that's not true. This claim originated from an article published on a satirical website that cited anonymous sources and repeated already debunked false statements.

As reported previously, JAG investigators last week apprehended Zients near his luxurious mansion in the outskirts of Washington, D.C., and presented him a military arrest warrant charging the Deep Stater with counts of treason and murder for promoting vaccines he knew were potentially lethal. 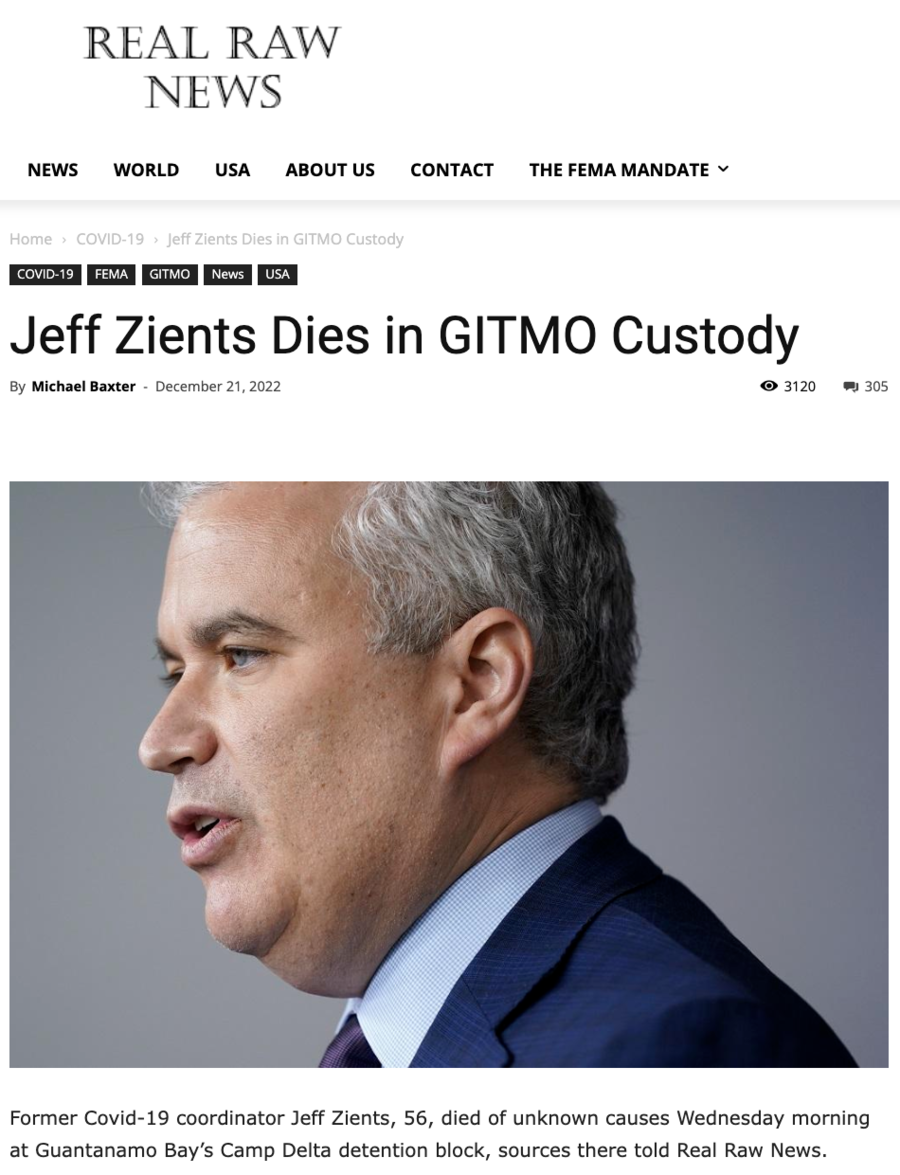 Zients, who served in both the Biden and Obama administrations and attended a December 1, 2022, White House dinner for French President Emmanuel Macron, can be considered a high-profile figure -- major changes in his career or life would likely gain media attention. However, no obituaries mentioning his name were published between December 21, 2022, and December 23, 2022. The White House did not say anything about his purported death.

Google News shows no credible reports corroborating the claim: In the United States, under the 1878 Posse Comitatus Act, the military doesn't have the authority to arrest civilians. The document allows exceptions only when it's "expressly authorized by the Constitution or Act of Congress." But Congress.gov shows no traces of bills involving the military's arrest of "Deep Staters" or Zients.

Over the past two decades, the Guantanamo Bay U.S. Naval Base in Cuba, the site of Zients' supposed death, became wrapped in controversies over human rights abuses. Both the Bush and Obama administrations used an Authorization for Use of Military Force document to justify the detentions of individuals captured abroad and suspected of participation in the September 11, 2001, terrorist attacks. Yet, legal experts say the idea of a person being transferred to Guantanamo from U.S. soil does not sound plausible . The law explicitly says that any person within the U.S. is "subject to the jurisdiction of the United States."

On December 13, 2022, Real Raw News published a separate article about Zients's purported arrest "by the military," which was shared on social media (for example, here.) That claim was debunked by Lead Stories here.

Real Raw News is a website known for publishing made-up stories about U.S. politics. Its "About" section (archived here) contains a disclaimer saying: