Did Elon Musk tweet, "You know, in some parts of the world, journalists get murdered for crossing the wrong people. Banning the reporters I don't like from my own platform feels like a pretty innocuous alternative to me" on December 16, 2022, the day after several journalists were banned from Twitter? No, that's not true: This screenshot of a tweet, purportedly by Elon Musk, is fabricated. There is no record of Musk, owner and CEO of Twitter, actually posting this tweet.

The fake screenshot appeared on social media on December 16, 2022, on imgur.com, Reddit's r/PoliticalHumor and on Twitter. One instance was posted on Facebook by the verified account of Richard Ray, the retired anchor of Dallas KDFW Fox 4 News. The Facebook post was captioned:

For those on Twitter - it is getting too crazy & I'm migrating to https://post.news/?r=q4Yqz If anyone else is looking for an alternative you might try Post. There's a waiting period to get on but once you do my handle is RichardRayTX and I'd like to connect there. Blessings

The text within the fake screenshot reads:

Elon Musk
@elonmusk
You know, in some parts of the world, journalists get murdered for crossing the wrong people. Banning the reporters I don't like from my own platform feels like a pretty innocuous alternative to me
10:26 AM Dec 16, 2022 Twitter for iPhone 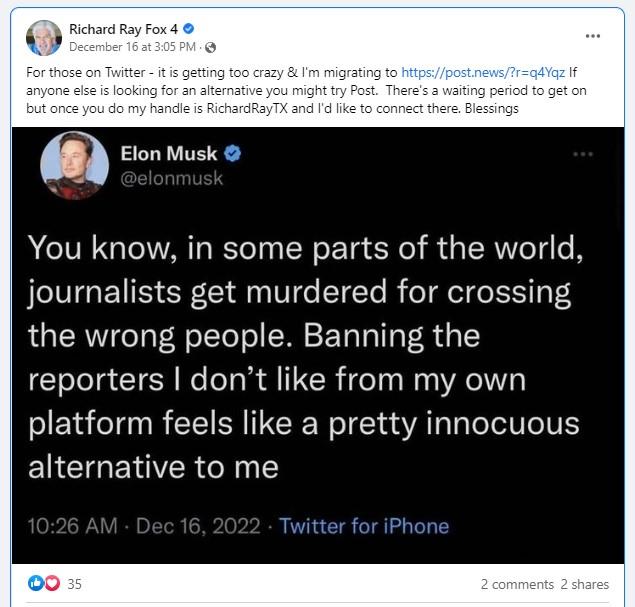 On December 15, 2022, several high-profile journalists were suspended from Twitter. On December 17, 2022, after posting a poll that asked users if he should reinstate the accounts of the suspended journalists, Musk tweeted:

The people have spoken.

Accounts who doxxed my location will have their suspension lifted now.

In the time between the suspensions and the reinstating of those accounts, the fabricated tweet began to circulate on social media on December 16, 2022.

Polititweet currently tracks the tweets of 1,533 public figures and notes when their tweets have been deleted. The screenshot below shows six of the most recently deleted tweets that actually had originated from the real verified Twitter account @elonmusk. Elon Musk has not deleted a tweet since November 21, 2022.

A screenshot of the results of an advanced Twitter search for the phrase "'journalists get murdered for crossing the wrong people'" (from:elonmusk)," shows that this tweet does not currently exist. If it has not been deleted, it can be concluded the tweet never existed.