Does a new study claim that artificial sweeteners are to blame for "soaring rates of heart attacks and sudden deaths the past two years"? No, that's not true: The study does not suggest any such link but instead says "The findings ... suggest a potential direct association between higher artificial sweetener consumption ... and increased cardiovascular disease risk." The U.S. Food and Drug Administration told Lead Stories the study does not change the FDA's "safety assessment or otherwise raise health concerns" about the sweeteners.

The claim appeared on Facebook on December 30, 2022, under the title "Artificial Sweeteners Behind Spike in Sudden Deaths, Heart Attacks, 'Experts' Claim." The social media post took its headline from a website called Slay News, which has the full article (archived here). It opens:

As countries all around the world are seeing soaring rates of heart attacks and sudden deaths in the past two years, 'experts' are now claiming that artificial sweeteners are to blame.

A new study claims that artificial sweeteners may increase the risk of cardiovascular disease and 'should not be considered a healthy and safe replacement to sugar.' 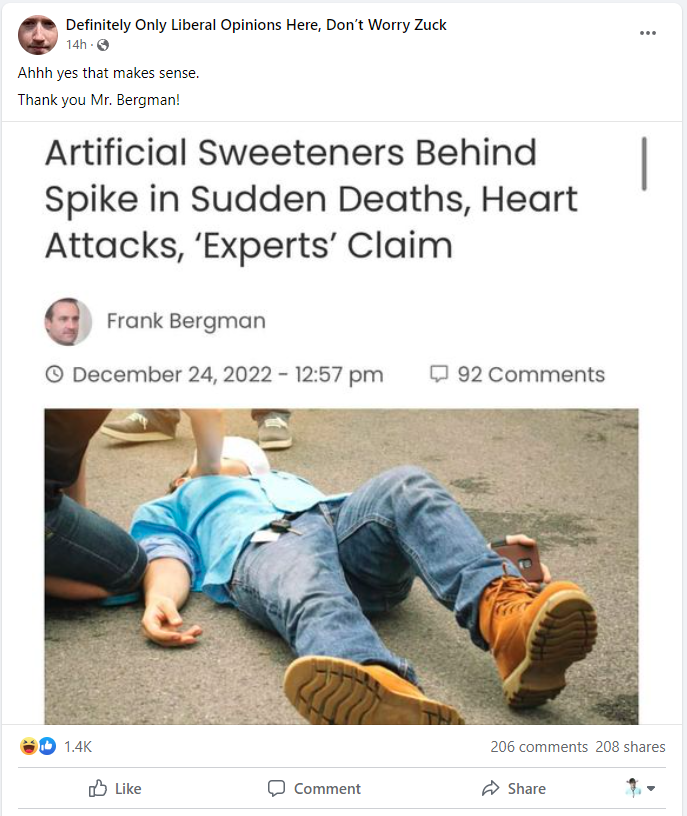 The study the article is based on was published in The BMJ, a journal of the British Medical Association. While it expresses concerns about artificial sweeteners, the study does not link them to a spike in "sudden deaths" and "heart attacks." Here's what it said:

In conclusion, these findings suggest that higher artificial sweetener consumption might be associated with increased risk of CVDs [cardiovascular diseases]. ... Our results indicate that these food additives, consumed daily by millions of people and present in thousands of foods and beverages, should not be considered a healthy and safe alternative to sugar, in line with the current position of several health agencies.

In a January 5, 2023, email to Lead Stories, the U.S. Food and Drug Administration (FDA) said all ingredients added to food in the United States must be safe for consumption. The agency's response continued:

FDA scientists have reviewed scientific data about the safety of certain high-intensity sweeteners in food for the general population under their conditions of use. In general, the FDA does not comment on specific studies, but evaluates them as part of the body of evidence to ensure the continued safe use of substances added to food.

At this time, considering the totality of information available, this study does not change the FDA's safety assessment or otherwise raise health concerns about FDA-evaluated high-intensity sweeteners, including saccharin, aspartame, acesulfame potassium (Ace-K), sucralose, neotame, advantame, and steviol glycosides. ...

The FDA urges caution in drawing conclusions from any single study.

The FDA website has this to say about artificial sweeteners approved for use in the United States:

It is true that there has been a surge in heart attacks in the last two years but it appears to have had nothing to do with artificial sweeteners. Instead, evidence suggests it's pandemic-related. An article on the website of the Cedars-Sinai Medical Center says:

Prior to the COVID-19 pandemic, heart attacks were the leading cause of death worldwide but were steadily on the decline. However, the new study--recently published in the peer-reviewed Journal of Medical Virology--shows that heart attack death rates took a sharp turn and increased for all age groups during the pandemic.

In addition, the phrase "sudden deaths" used in the Facebook post and in the article is a play on a similar expression "Died Suddenly," the title of an error-filled anti-vaccine film and frequently found in social media posts in December 2022 making false claims about the lethal dangers of the COVID-19 vaccines.