Did the military arrest former FDA "Commisioner" Stephen Hahn? No, there's no evidence to substantiate that: The claim was reported on a website that is well-known for making up stories about public figures. The site posts a disclaimer warning readers that it contains "humor, parody, and satire." The headline on the story making the claim also misspelled commissioner as "commisioner." 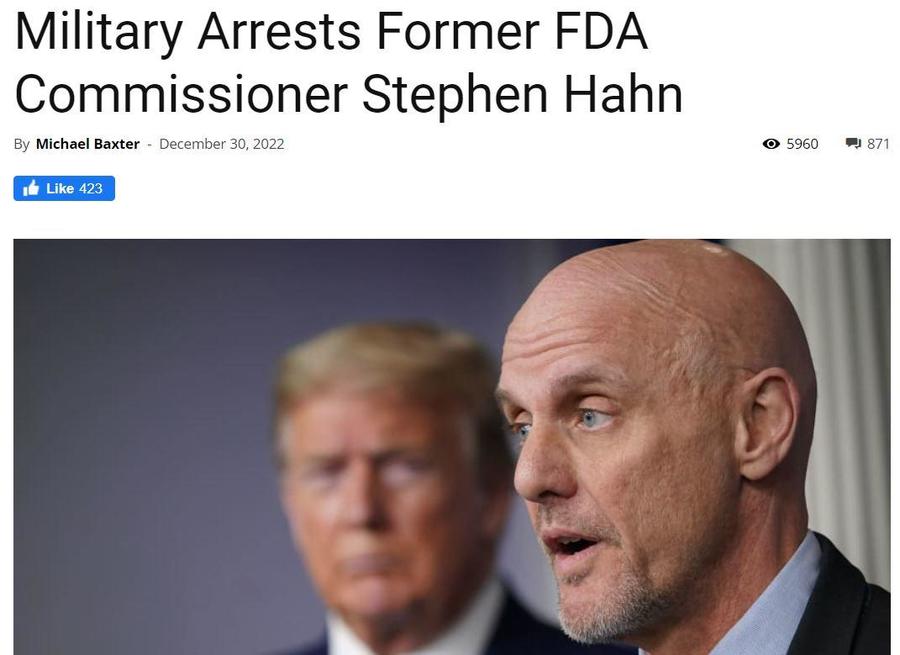 Hahn served as the head of the Food and Drug Administration under former President Donald Trump from 2019 to 2021. There have been no credible news reports of his arrest by the military as of December 31, 2022.

In the United States, under the 1878 Posse Comitatus Act, the military does not have the authority to arrest civilians. The document allows exceptions only when it is "expressly authorized by the Constitution or Act of Congress." However, Congress.gov shows no traces of bills involving the military's "arrest of Stephen Hahn."

Real Raw News is a website that consistently publishes made-up stories about U.S. politics. The news-style layout of the website make it look like a legitimate news source, so it often fools people into believing the stories are real. Screenshots and copies of the stories regularly turn up on other websites or on social media where they are presented as real.

It bills itself as "humor, parody and satire" on the "about" page (archived here):

The same "about" page claims the main author is a man named Michael Baxter. In 2021 a PolitiFact article (archived here) identified the writer as a "Michael Tuffin" in Texas based on records found in a GoFundMe campaign set up to support the site.

NewsGuard, a tool that provides credibility ratings for websites, published a five-page PDF report (archived here) in 2021 describing realrawnews.com as, "An anonymously run website that has published baseless and debunked conspiracies about COVID-19 and U.S. politics." It cautioned that the website severely violates basic journalistic standards."