Did the Brazilian military kill the leaders of the Red Command cartel in early December 2022, and prepare to "take over" the country? No, that's not true: The article circulating on social media that makes these claims contains multiple factual inaccuracies and recycled false claims.

The claim appeared in an article published by thegatewaypundit.com on December 5, 2022 (archived here.) The title read:

Gateway Pundit and Matt Tyrmand on War Room were the first worldwide to report that the Brazilian military is moblizing under its constitutional authority to protect democracy. Sources on the ground now confirm that the Army is mobilizing and has eliminated key leaders of the Communist-allied drug cartels in Rio.

In an unusual step for the military, the Army has invaded favelas of Rio de Janeiro and killed top leaders of the Comando Vermelho (Red Command) drug cartel, which supports the Communist criminal Luiz Inácio Lula da Silva. . The drug gangs were the only ones to celebrate the alleged election victory by criminal Lula Oct. 30, firing automatic weapons in the air in the favelas. President Bolsonaro cracked down hard on the Brazilian drug gangs.

Here is what the article looked like at the time of the writing of this fact check: 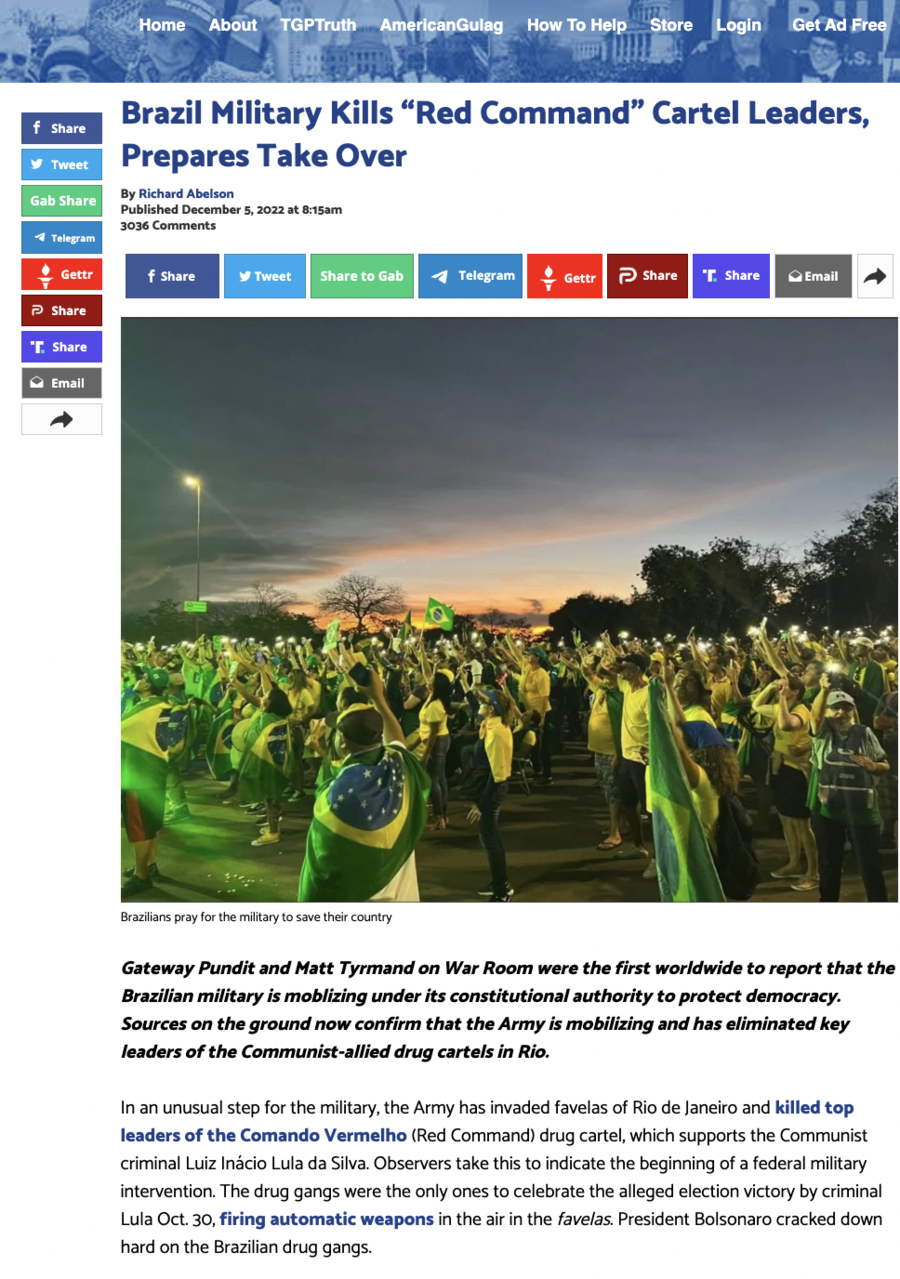 The article, however, contained multiple misleading statements or recycled rumors that had been proven false.

Comando Vermelho, or Red Command, was first established in the 1970s as means of self-protection in a Rio de Janeiro prison, and later expanded its activities to muggings, bank robberies and cocaine dealings, as summarized by InSight Crime, a non-profit that monitors organized crime in the Americas.

Yet there is no evidence supporting the allegation that Brazil's leftist president-elect, Luiz Inacio Lula da Silva, known as Lula, has ties with the Red Command.

In the summer of 2022, the country's top election authority, the Supreme Electoral Court dismissed accusations that Lula, who served as Brazil's president from 2003 to 2011, was in any way affiliated with the criminal group.

On December 1 and December 2, 2022, the Brazilian press reported (here and here) about an earlier law enforcement operation carried out by military police that left a man named Rodrigo Barbosa Marinho shot to death. Marinho, also known as "Rolinha," was one of the Commando Vermelho leaders, whose "prestige and strength" within the gang was well-established, according to court records detailing his criminal past here and here. None of these court documents note that Marinho is or was a close associate of Lula.

Though the article claims that "the Army invaded favelas of Rio de Janeiro" in an operation against Commando Vermelho, there is no evidence to suggest that they did. It is not uncommon for military police to carry out anti-drug raids in underprivileged communities of Rio de Janeiro, but the military police in Brazil "are under the control of the Governors of the State, Federal District and Territories," rather than the army, according to Article 144 of the Constitution.

While the federal government may call the military police for federal service during the time of emergencies or war, its primary function, under the Constitution, is to help the state enforce "public order and security of persons and property."

Brazil's military police are controversial for alleged involvement in police killings, as documented by Human Rights Watch, but not for mobilizing for military coups against elected leaders after Brazil's military regime ended in 1985.

Even the primary source did not support the claim

Ironically, the Gateway Pundit material cited a source that explicitly refuted the outlet's claim. In the second paragraph, the article linked to a piece published by the Portuguese-language website Boatos.org that refuted allegations about preparations for a coup to retain outgoing President Jair Bolsonaro.

The last of the movements we are seeing among people who still believe in a coup in Brazil points to "atypical movements" by the Army that would indicate the beginning of federal military intervention. [...]

The messages in question are just an example of the latest delusion that is going viral among Bolsonarist networks. That's exactly why we're here to deny that the Army is carrying out operations in the favelas of Rio de Janeiro and killing leaders of the Comando Vermelho.

Lead Stories already debunked a claim about supposed video evidence of drug gangs celebrating Lula's victory in Brazil's October 2022 presidential elections. Aside from alleging Lula's supposed connections with drug cartels, the Gateway Pundit article also reflected a larger conspiracy theory about alleged election fraud in Brazil's 2022 presidential elections that was promoted by Bolsonaro even before the vote. Lead Stories fact checks related to these allegations can be found here.

In an October 31, 2022 runoff vote, Bolsonaro lost to Lula by a 2-point margin, according to official results.

No signs of the purported military takeover

As of this writing, there is no indication that the alleged military coup is currently taking place in Brazil. Had it been the case, it would have become front-page news in many countries. But neither The Associated Press nor CNN nor The New York Times nor Fox News mentioned anything similar to a coup.

Back in November 2022, as Bolsonaro's team agreed to the transfer of power, some of his supporters continued discussing a hypothetical military takeover on social media platforms.

On November 9, 2022, the defense ministry of Brazil submitted a report on the country's electoral system to the Supreme Electoral Court. The document, however, did not show any intentions of preventing president-elect Lula da Silva from taking control of the country. The report highlighted some potential risks related to the technical aspects of electronic voting adopted in Brazil, but emphasized that the defense ministry did not plan to challenge the Court's decisions:

...the performance of the Armed Forces in support of the Court Electoral Superior (TSE) has been, since the beginning, guided by legality, highly technical work expertise and collaboration with the Electoral Justice