Does a portrait of a familiar-looking historical figure actually show a CIA agent instead of German dictator Adolf Hitler? No, that's not true: The picture can be found in the National Archives Catalog and is described as a "Portrait of Adolf Hitler." The image is available for anyone to download. There is also no historical evidence of an American-backed doppelganger replacing the Nazi leader. The CIA did not exist during Hitler's lifetime.

The claim appeared on Instagram on December 5, 2022, under the title "THE CIA FAKED IT ALL." The headline in the post says:

HOLLYWOOD AND CIA FAKED IT ALL 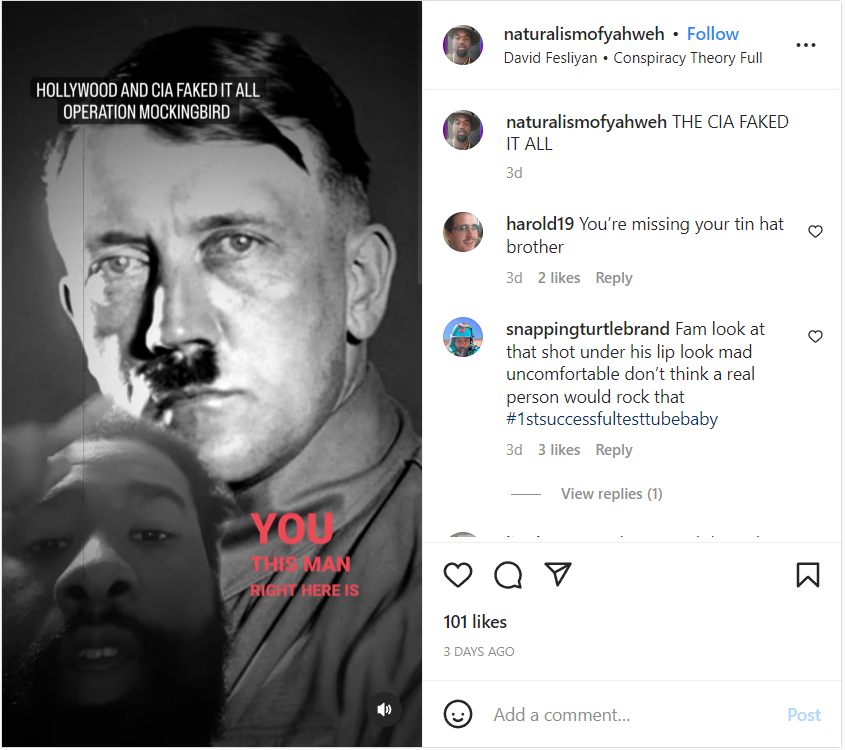 In the Instagram post, an unidentified narrator in the video points to a picture of Hitler and says the following:

In four short sentences, there are already several problems with the claim: Hitler died in 1945, but the CIA didn't begin until 1947. Also, MK-Ultra, a top-secret CIA project to assess the potential use of LSD and other drugs for mind control, information gathering and psychological torture, didn't begin until 1953, or about eight years after Hitler's death.

Then, there are the pictures. The image (below) farthest to the left is purported to be the CIA agent who replaced Hitler. The second and third images were shared so viewers can compare "the fake" Hitler to the actual Nazi leader. The narrator cites differences in the ears as his sole evidence, saying "if you look at his ear, it looks completely different. ... It's not the same person, like I told you." The three images appear side-by-side: 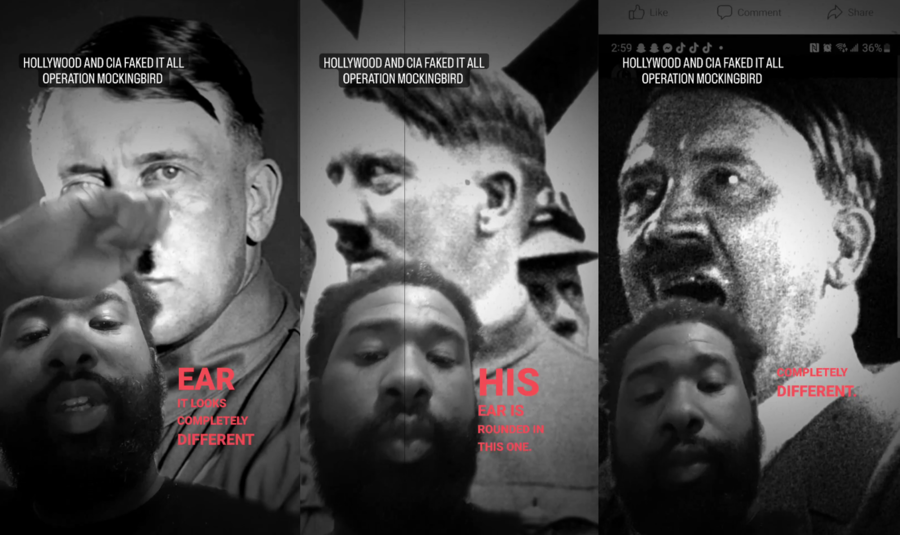 Despite the narrator's claims, all three pictures show Hitler. The first picture, which he says is of the imposter, is a portrait of the German dictator that can be found in the National Archives Catalog (download here). It's included below: 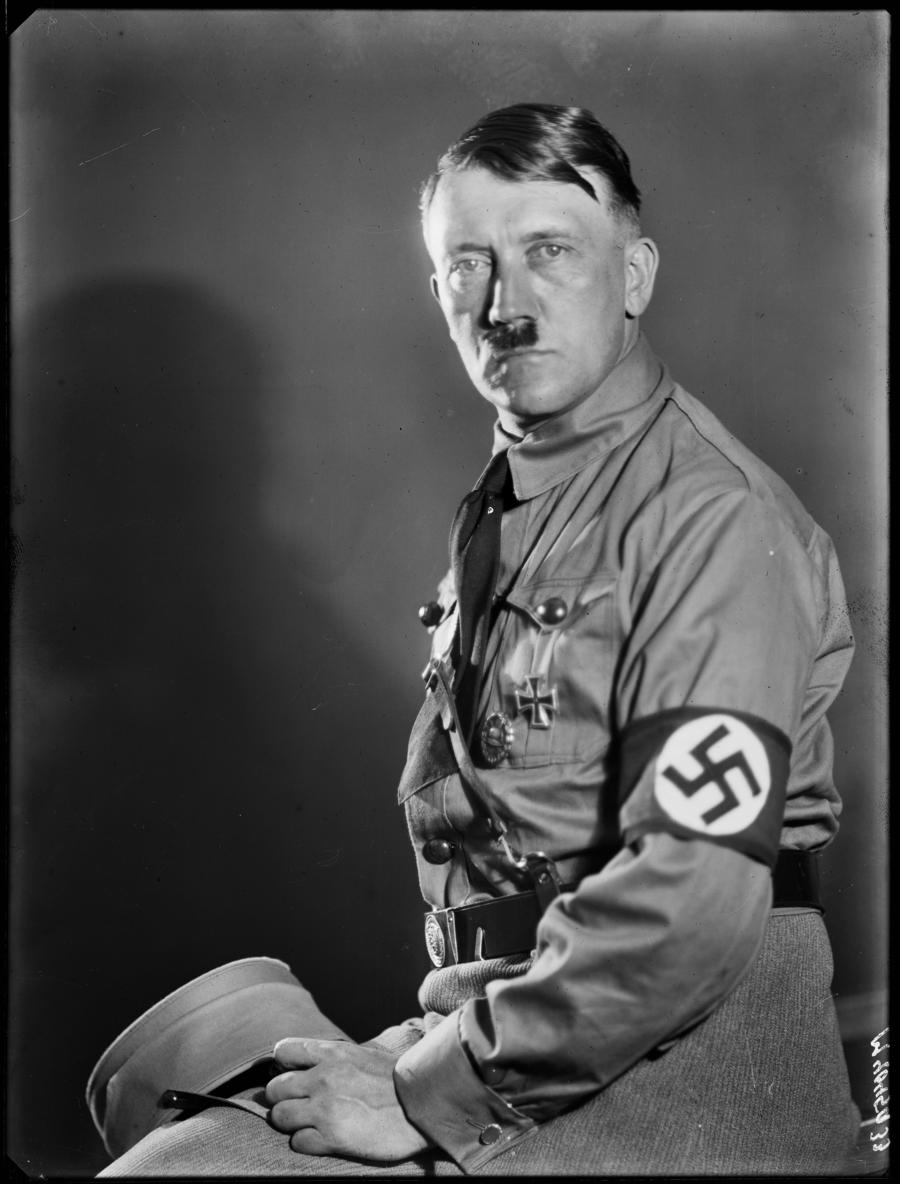 Three history professors came down hard against the notion that the CIA substituted one of its own for the Nazi leader. In a December 9, 2022, email to Lead Stories, Jeffrey Herf at the University of Maryland scoffed at the idea put forward in the video:

The assertion about Hitler and the CIA is so absurd that it does not merit a reply--except I guess in the world of the internet where anything goes. ...

The idea that he was a CIA agent is not something that is 'up for debate' or an 'interesting issue' or a 'provocative hypothesis.' It is just bonkers, and a lie so brazen and ignorant that it probably will find adherents on the internet.

G. Kurt Piehler, director of the Institute on World War II and the Human Experience at Florida State University, told Lead Stories in a December 9, 2022, email that he's amused at how much credit conspiracy theorists give the CIA, saying the "video makes absolutely no sense." He added:

You almost want to ask the narrator: you do know who Hitler is? You do know what happened to him and Berlin in 1945? ... You would think you would make the case Hitler survived World War II before talking about doubles and ear changes ...

Immediately after the war ended, there were rumors that Hitler somehow escaped--I've actually seen a few news reports. The Soviets went to great lengths to determine Hitler's fate and there is no doubt that he committed suicide. The Soviets would not have allowed Hitler to live--he would have been either summarily executed or handed over to Nuremberg.

University of Illinois history professor Peter Fritzsche said people who believe videos that make claims like this one are "operating in an untouchable alternative reality." In his December 9, 2022, email to Lead Stories, he said the Nazi leader's plans and intentions never varied throughout World Word II:

Since Hitler did in fact gamble away his Third Reich in self-destructive behavior, the origins of which can be seen many years earlier, it is simply not clear what another Hitler would be doing. Of course the whole thing is about the CIA and you use the worst thing to imagine in order to hype up your sinister claims against the CIA. Since the CIA is better at bungling than doing, any theory that posits mastermindedness is dubious on arrival ...

Other Lead Stories fact checks about Hitler are here and here.