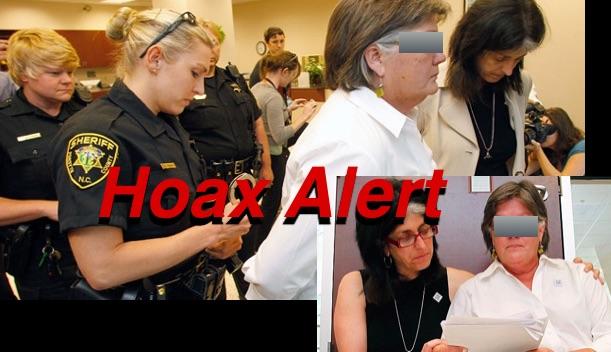 A FALSE story published by worldnewsdailyreport.com claims a woman was identified as transgender and ejected from a public restroom.

The FAKE story that was detected on social media by Lead Stories' Trendolizer has been identified as a hoax meant to get people all fired up.

"Linda Hovinsky" (the fictional protagonist) is said to have been thrown out of a restroom in Charlotte, NC after police were alerted of a transgender woman using the public women's restrooms. The UNTRUE story goes on to tell us that "Linda" was tased multiple times before being subdued:

I tried to fight them to at least put my pants back on, that's when they threw me on the floor and started kicking the life out of me and tased me I don't know how many times," she told local reporters in tears.

Lead Stories has traced the above two images back to an article written by nydailynews.com which told of two women who were arrested after refusing to leave the County Register of Deeds office upon being denied a same-sex marriage license.

The first woman being handcuffed is Mary Lee Bradford, along with her partner Mary Jamis.

The story quotes a fake employee of the Charlotte-Mecklenburg Police department, "Allan Jones", by saying

If the lady had not refused to come out peacefully of the washroom and explain calmly that she was in fact in her rights to be there, there would not have been an escalation of violence. The woman threatened police officers and that is what made things difficult for her and the agents that intervened

Allan Jones is not an employee of the Charlotte-Mecklenburg Police department and no such incident has been recorded on the CMPD's crime mapping system.

The two images above belong to Bob Leverone and were featured in an article published by nydailynews.com. Both images were stolen by worldnewsdailyreport.com and used dishonestly for their untrue article.

This is simply a FAKE story designed to insite anger in whoever believes it to be true.