Another great hoax by World News Daily Report was brought to our attention today via our Trendolizer engine. The story is titled "Saudi Prince loses $350 millions and 5 of his wives in 6 hours at the casino" and it opens like this:

SHARM EL SHEIKH, EGYPT | A Saudi prince lost 1.350 Billion Riyals ($359 Million) in six hours as well as five of his nine wives while playing poker at the casino.

Prince Majed bin Abdullah bin Abdulaziz Al Saud is well-known around the world for both his drug and gambling habits, but his latest betting frenzy is quite exceptional even for him.

Spending the week at the renowned Sinai Grand Casino, the Prince spent six hours at the "unlimited stakes" poker table and had an incredible losing streak.

In one evening, he lost hundreds of millions of dollars and was even forced to give up five of his spouses to cover part of his debt.

It would be quite an accomplishmentfor a man like Prince Majed bin Abdullah bin Abdulaziz Al Saud to lose this much money and several spouses at a casino given that he has been dead since 2003. 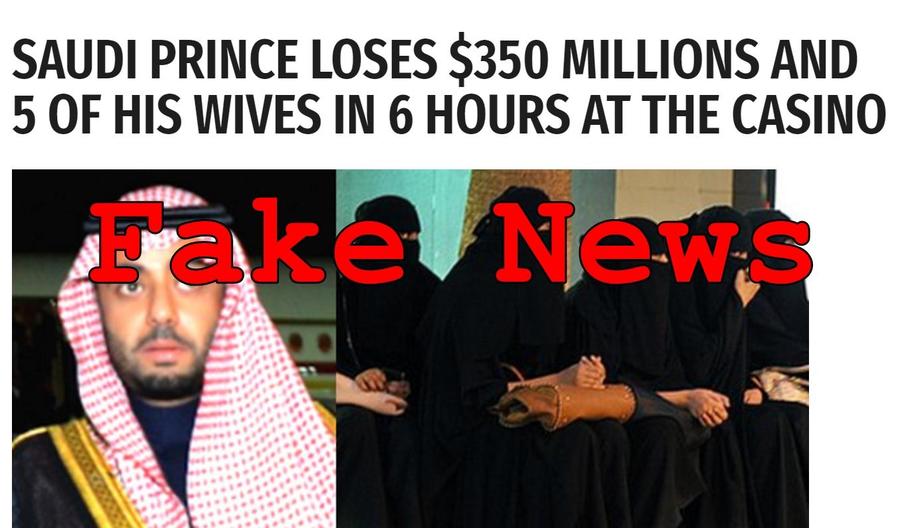 The hoax story is being actively shared on social media as you see in the Trendolizer graph at the end of this article. It plays on various Arab stereotypes such as disrespect of women and treating them like property/slaves so it isn't surprising a certain subset of people would share this kind of article without too much checking. If you see anyone who believes it is real, feel free to direct them here.