The well-known hoax website World News Daily Report is at it again, with a hoax article titled: "Thailand: Tourist wearing fake shark fin harpooned 9 times by villagers". The story starts out as follows:

Pattaya | An American tourist was almost killed this morning by local fishermen who mistook him for a bull shark.

27-year old David Smith and two of his friends were enjoying the first day of a two-week vacation in Thailand and had decided to spend some time at the beach.

Around 10:00 AM, Mr. Smith moved a few hundred meters away from his friends in order to put on a fake shark fin and pull a prank on them.

He started swimming towards the beach with only the fin emerging from the water, provoking an instant reaction from the local fishermen.

More than a dozen fishing boats filled with men armed with harpoons encircled the young man only 20 meters away from his friends.

They fired dozens of projectiles in his direction and speared him a total of nine times before they realized their mistake.

The gruesome picture that goes with the story is actually from a speedboating accident involving two Russian tourists that happened in February 2016. 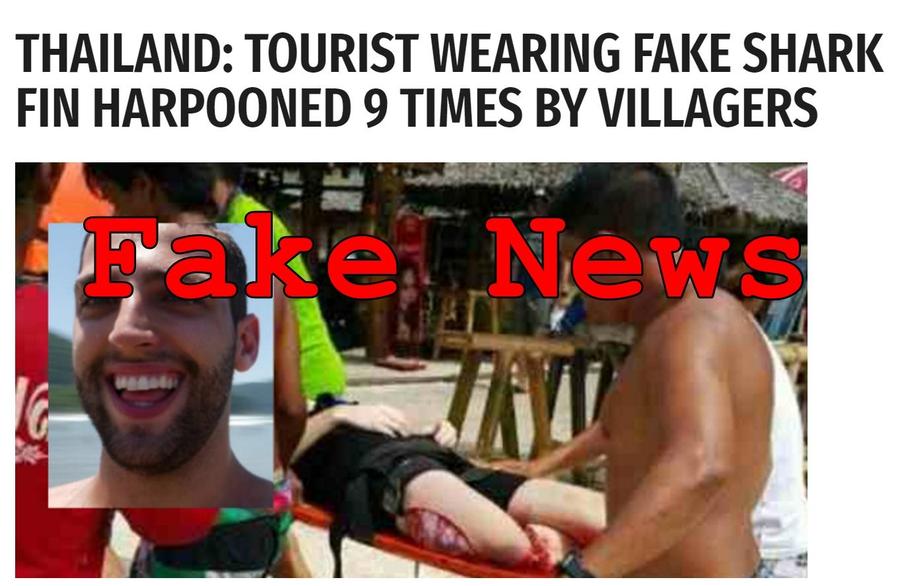 As can be see in the Trendolizer graph at the end of this article it looks like the owners of the website have started boosting the reach of the story on Facebook because it looks like it has the potential to fool lots of people into clicking and spreading it even further. Don't fall for it, send people here to learn the truth!