The fake/satirical website The Miami Gazette published an article titled: "Cannibals Arrested in Florida Claim Eating Human Flesh Cures Diabetes and Depression". It opens like this:

According to Vernal Heights Chief of Police, Gregory Moore, the 3-men were arrested when officers responded to what they assumed would be a routine noise complaint.

Police arrived at 3845 Toolson Lane (the home of William Provost) at approximately 7:45 PM on Sunday evening in response to a neighbor complaining of strange sounds coming from the home.

There are two very good reasons why the story is not true. 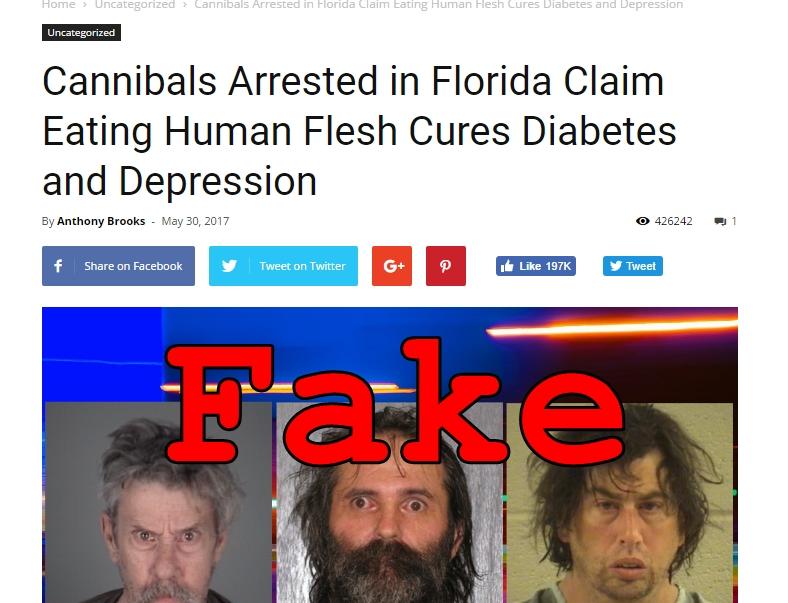 The first reason is simply that the town of "Vernal Heights, Florida" does not actually exist. Check it out using Google Maps or Bing Maps.

The second reason is that The Miami Gazette is a fake/satire website which carries following disclaimer:

All news articles contained within The Miami Gazette are fictional and presumably satirical news - with the exception of our 'list style' articles and quizzes that include relevant sources.

The content published on The Miami Gazette is intended to be entertainment and is often intended to generate thought and discussion among its readers.

As you can see in the Trendolizer graph at the end of this article that didn't stop almost 200.000 people from liking or sharing it anyway. Several other fake news websites have already copied the story. Don't be fooled!