Monica Lewinsky was having a visit with a friend from high school this week that ended in tragedy. Just moments ago, Freedom Crossroads Correspondent Louis Leweigh confirmed that The coroner just left the scene where Monica Lewinsky, who we now know never ended her affair with Clinton, was found murdered in a burglary.

"Pretty cut and dry. We have a suspect we think we have on several area cameras who is a known pot addict. He's been in and out of jail more than a dozen times for possession. We're looking at him and we're also considering because of the high-profile nature of the case other suspects like the Clintons."

The "crime scene" image that goes with the story is actually from a 2011 story about Clarence Cash, an ex-cop in New York who shot and killed his wife. 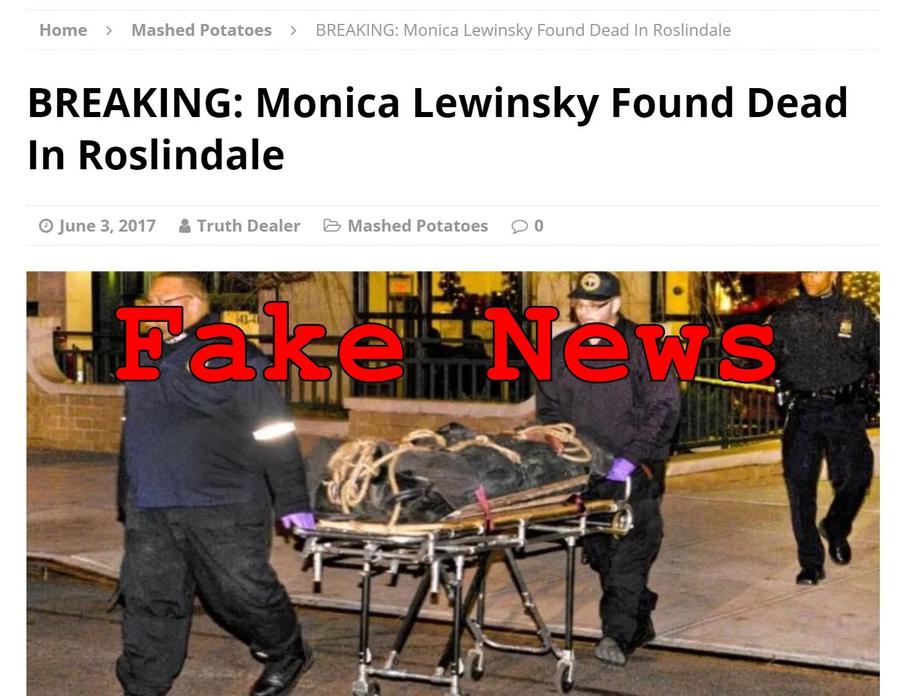 Another reason why the story is not true is that Freedomcrossroads.us is a fake news website. It says so right on their "About" page even though you have to scroll down to see it:

Freedom Crossroads uses facts that don't exist and relies more on imagination than the truth. All of our articles are basically a crock of shit and should be considered satirical whimsies aimed at exposing the hardcore belief of conservatives that whatever is posted on the internet must be true. All people, places, names and images should be considered fictitious.

The site seems to be very similar to The Resistance: The Last Line of Defense, another notorious fake news website. Politifact identified a liberal from Maine by the name of Christopher Blair as the owner of that site. Both sites seem to be using the same type of fake 'categories' under the article titles and both seem to be designed to troll Trump supporters with outrageous fake news and hoaxes. Both sites have the same image of a fist with an American flag painted on it on their about pages.

Despite all these obvious hints it looks like hundreds or thousands of people are falling for the hoax as you can see in the Trendolizer graph at the end of this article. If any of your friends fall victim to this hoax, direct them to this site to learn the truth because as usual other hoax-busting and factchecking websites like Snopes.com are way behind on this story.