SECOND UPDATE: The imam (Ibrahim Hindy) whose picture was used in the second story has denied having anything to do with it and Canadian media is getting in on the story.

That's me in the picture. I've never even been to Texas before. https://t.co/jIPfeALckc

THIRD UPDATE: The pictures in both stories has been replaced with an image of a Lebanese Salafi imam named Ahmed al-Assir and the author of the story has written a post explaining his motivations: "BREAKING: Canadian Muslims Vow Revenge Against 'Evil American Trumpsters'" (yeah, we thought the title was weird too). And then he published another fake story using the image of an unrelated imam. 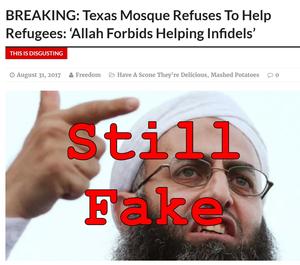 The Ramashan Mosque outside of Houston is one of the few buildings in the area that has not been hard by flooding, but if you think that means the people currently barricaded inside will be helping their neighbors you have another thing coming.

The building can easily hold over 500 people, much more than the 27 currently inside. But the imam of the mosque, Aswat Turads, says that they absolutely cannot accept any non-Muslim people because it's against their religion.

"The Quran is very clear," Turads told local news radio station WXTX, "we are forbidden from helping infidels, no matter how much we want to. If we allow Christians and Jews inside, we are violating a fundamental tenant of Islam and will be punished by Allah.

There is no "Ramashan Mosque" anywhere in the world according to Google Maps. Similarily, a Google search for "Aswat Turads" yields no results. There is a news station named WXTX, but it is is the Fox affiliate serving a large portion of southwest Georgia and southeast Alabama, nowhere close to Houston, TX.

The image of the imam in the picture comes from a video of an actual imam named Ammar Shahin who apparently gave an anti-Semitic sermon in California recently for which he later had to apologize. 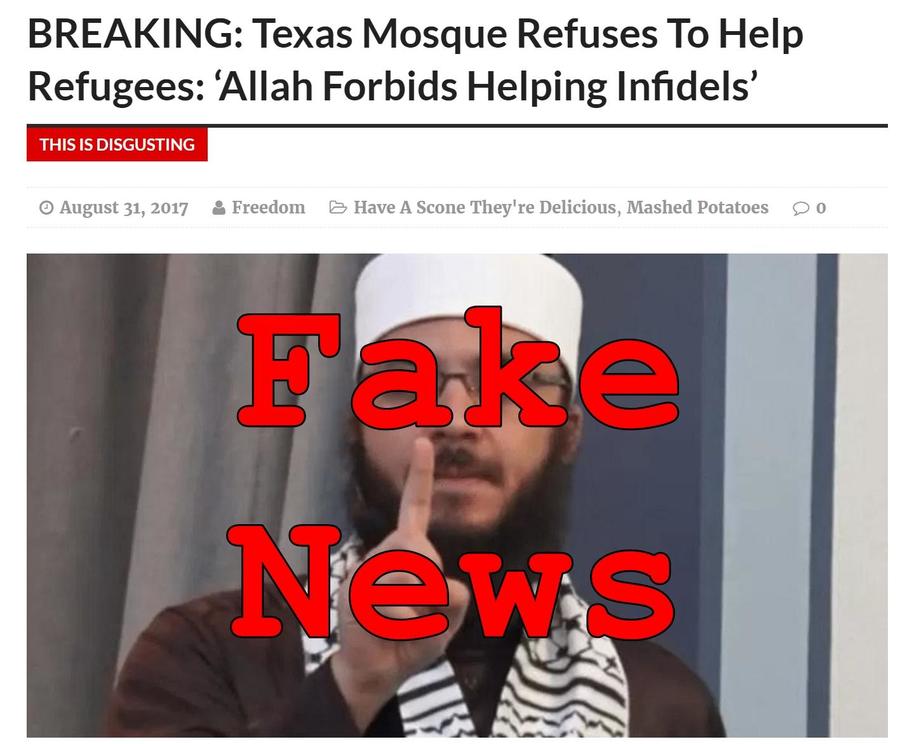 And of course there is the big, fat satire disclaimer at the bottom of the page:

That didn't stop many people from sharing the story as real anyway, and we've already spotted the first "real" fake news site which has copied the article (archived) without the satire disclaimer.