Fake news website tmzbreaking.com (unrelated to tmz.com) published an article titled "LAW PASSED: All Child Support in the United States Will End by Beginning of 2018" which opened:

President Donald Trump and U.S. Congress voted yesterday on a bill that could change the world. Child support claims have said to come to an end and many officials are not happy about it.

President Trump claims he will no longer for any party of parent to pay child support. Trump also says that ant reports of abuse or negligence to a child from either party will result in the child automatically being turned over to the State Child Welfare.

No such law was passed. The story follows hot on the heels of two similar hoaxes from website react365.com that got hundreds of thousands of likes so it is likely the operators of tmzbreaking.com thought they could cash in on the hype too. 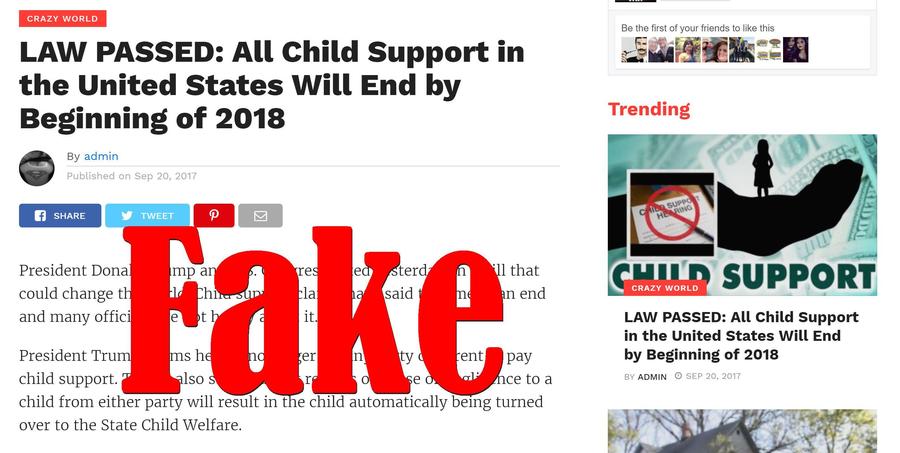 The fake story ends with a plea to

Of course there is no extra info to be found on that site. Channel50News.com seems to be a relatively new prank website where visitors can create their own fake stories by entering a title and a description and uploading an image.

Additional proof that the story is fake can be found in the disclaimer at the bottom of tmzbreaking.com:

tmzbreaking.com is the most notorious fauxtire & satire entertainment website in the world. If it's trending on social media you'll find it here!

So don't fall for the hoax and warn others who might really believe they will lose their child support (or will be able to stop paying it).